France train hero, Airman 1st Class Spencer Stone, was stabbed four times in the chest early in the morning on... 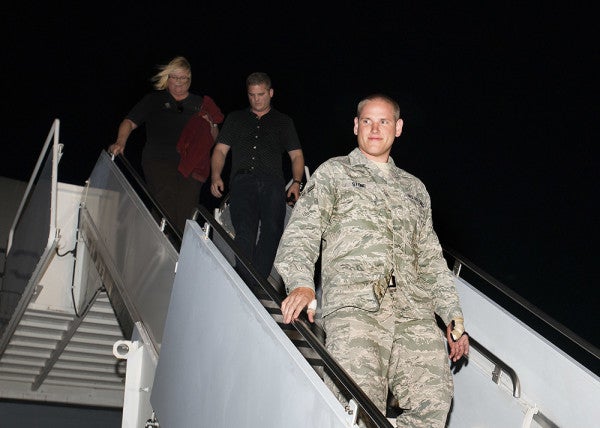 France train hero, Airman 1st Class Spencer Stone, was stabbed four times in the chest early in the morning on Oct. 8, while in Sacramento, California. Stone is one of three Americans who helped thwart a terror attack aboard a Paris-bound train on Aug. 21, when an armed gunman boarded the train while it was stopped in Belgium.

According to a report by Sacramento’s local NBC news affiliate, the stabbing happened around 12:45 am and the victim suffered “multiple stab wounds to the torso” outside of a bar at 21st and K Streets.

“It is believed that the victim was out with a group of friends when a physical altercation led to the victim being stabbed multiple times in his upper body,” a news release from the Sacramento police says, as reported by Air Force Times. “Detectives were called to the scene to assist with the investigation and the victim is currently being treated for what appears to be non-life threatening injuries.”

“A1C Spencer Stone has been transported to a local hospital, and is currently being treated for injury,” said Air Force spokesman Lt. Col. Christopher Karns, in an email to Air Force Times. “The incident is currently under investigation by local law enforcement. He is currently in stable condition.”

According to a tweet from the Sacramento police, “The assault incident is not related to a terrorist act. Assault occurred near a bar, alcohol is believed to be a factor.”

As of this morning, no arrests had been made in the stabbing.

In a press conference Thursday afternoon, Sacramento Deputy Police Chief Ken Bernard said two suspects fled the scene following the assault. The suspects are described as two adult, Asian men in white t-shirts and blue jeans. The suspects left the scene in a 2009-2012 dark gray or black Toyota Camry. Bernard reiterated that the stabbing was believed to be related to a nightclub incident and not a terrorist attack or hate crime. He also confirmed that Stone was stabbed more than once with a single weapon resulting in serious injury, but he remains in stable condition.

Below, surveillance footage from a liquor store on 21st Street published by ABC 10 News allegedly shows Stone involved in a fight before he is stabbed in Midtown Sacramento.