If you’ve ever wondered how a ragtag group of rebellious teens managed to topple the Galactic Empire in “Star Wars,”... 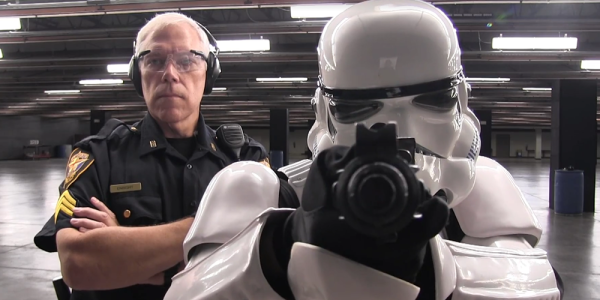 If you’ve ever wondered how a ragtag group of rebellious teens managed to topple the Galactic Empire in “Star Wars,” here’s one reason: Stormtroopers can’t aim for shit.

In a recent video by the Fort Worth Police Department in Texas, one of the officers goes over the basics of marksmanship with a new recruit, likely straight from stormtrooper boot camp. The video, which is part of a recruitment campaign by the department, has since gone viral and garnered more than 14 million views. The video includes an appearance by Darth Vader and a miserable display of weapons handling on the part of the white-clad stormtrooper, who only scores a hit on the target once he’s five feet away.

Which isn’t a surprise to anyone that remembers this scene:

Just a heads up to the Fort Worth Police Department: Cute video, but the Empire is actually on the dark side of the force. Trust us, we checked.