Something about the duality of man, sir. 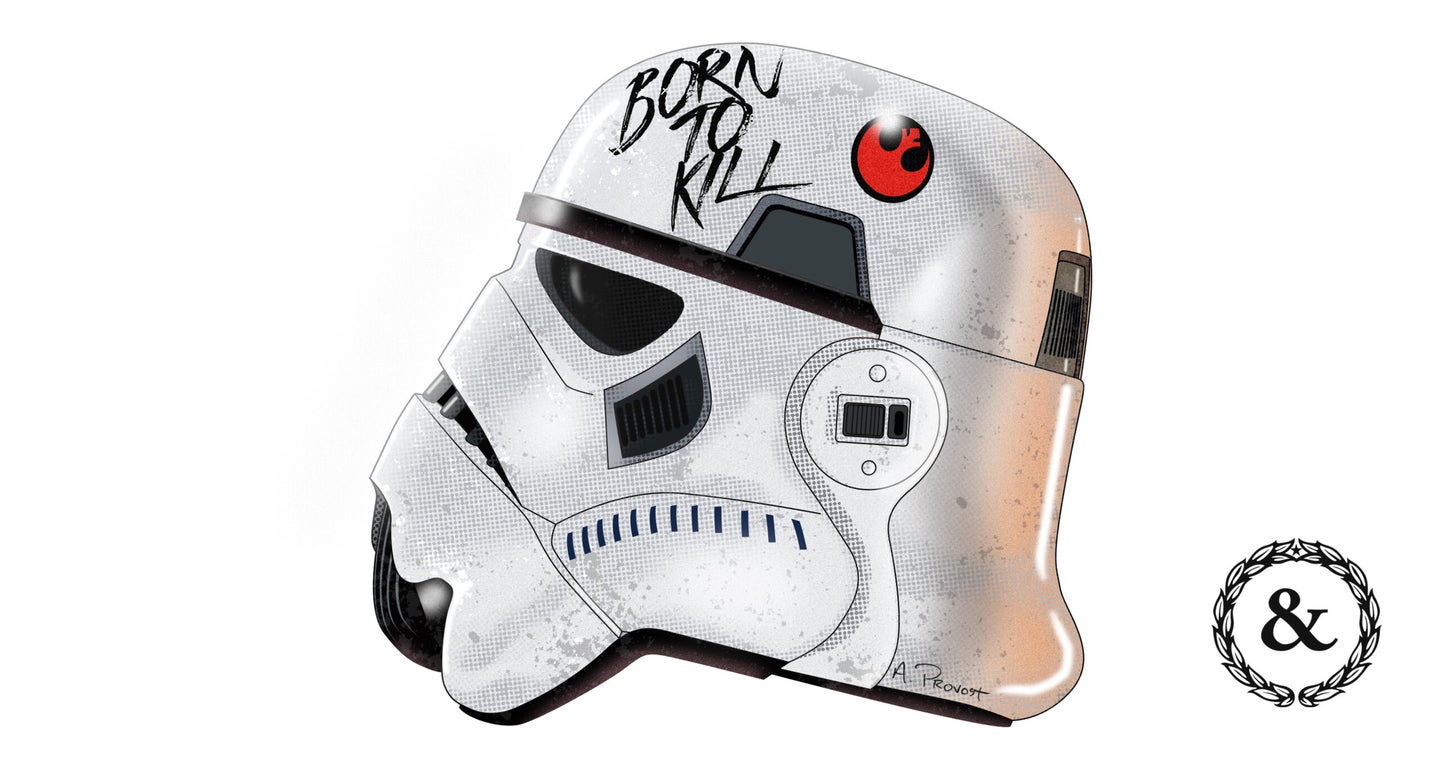 At the current pace, every character in the Star Wars universe will have his or her own movie or television series by the end of the decade. Some examples will likely include Everyone Loves Porkins; Tauntaun King; and Killing Greedo.

But if any Disney executives are reading this, please consider that the stormtroopers have been criminally underused. And though some recent movies and shows have given them a bit more screen time, it’s only ever been as incompetent members of an evil empire. There’s been little to no exploration of who they are, what drew them to service — and we know from the standalone Solo movie that some, if not many, are not idealogues, but everyday citizens simply looking for a way to change their situation. These mostly anonymous but compelling characters deserve their own Platoon or Generation Kill to tell the story of the average 11 Bravo or 0311 serving in an AOR far, far away.

Until now, the stormtroopers have largely been glorified extras known for producing a tremendous volume of fire while being unable to hit anything. Like Darth Vader, they are more machine than man, and that fits into George Lucas’ views on the Vietnam War.

In a 2018 interview with fellow director James Cameron, Lucas likened the Vietnamese communists with the American rebels during the Revolutionary War.

“We’re fighting the largest empire in the world and we’re just a bunch of hayseeds in coonskin hats that don’t know nothing,” Lucas said. “And it was the same thing with the Vietnamese. The irony of that one is in both of those, the little guys won. And the big, highly technical empire — the English empire or the American empire — lost. That was the whole point.”

In Lucas’ universe, stormtroopers are simply vessels for the latest technology. With all respect to Lucas, that type of treatment is deeply unfair to the Vietnam veterans on which the stormtrooper characters are based as well as service members in general.

The U.S. troops who have fought in Vietnam and all conflicts before and since are not machines, they are human beings. The soulless portrayal of service members in the Star Wars movies stands in stark contrast to the characters that war correspondent Michael Herr wrote in his novel Dispatches about the Vietnam War.

The service members that Herr describes not only get shot at; they become exhausted from climbing endless hills with all their gear in their rucksacks. They look for omens about how to avoid getting killed. They pop an assortment of pills to keep them awake at night during long marches and then come down afterwards. They are made of flesh. Prick them, and they bleed.

“How do you feel,” Herr wrote, “When a nineteen-year-old kid tells you from the bottom of his heart that he’s gotten too old for this shit?”

A scene in the recent Obi-Wan Kenobi series indicates that Disney might be open to a more nuanced portrayal of troops and veterans. In one episode, Kenobi gives spare change to a former clone trooper, who fought for the now-defunct republic and was later abandoned by those whom he protected. This trend continues with Andor, to a degree: in the series’ latest episodes, two of the principal rebel fighters waging a covert war against the empire are revealed to be current or former imperial troops. In doing this, the franchise appears to suggest that it’s open to exploring the rank and file perspective, not just of the rebellion, but of the empire it’s fighting against.

This type of gray universe would be perfect for a stormtroopers series that explores the ambiguity at their fight, one which could, with a deft and tactful hand, tie into themes that emerged during the Global War on Terrorism. It’s especially important to tell this story because, let’s face it, the Iraq and Afghanistan generation of veterans is never going to get its own Saving Private Ryan. There’s no way that Steven Spielberg will make a movie about a war that doesn’t end with the U.S.A. saving the entire world.

The Mandalorian also took a step toward recognizing that those who go to war embody the duality of man in an episode where an Imperial officer says that the destruction of Alderaan “was a small price to pay to rid the galaxy of terrorism.”

It reminded me of a conversation I had with an Army noncommissioned officer in late 2005 about how the Iraq war fit within the U.S. strategy of going to where the terrorists lived and f—king up their neighborhoods.

To be clear, I am not arguing that the Intergalactic Empire is a benign entity,

but there are some shared experiences among soldiers that exist on any side of a conflict: Brotherhood, fear, courage, and sacrifice. These stories can be told without defending this fictional galactic empire.

To fit with Star Wars’ trend of an unambiguously bad empire, a series could show the story arc of a stormtrooper who naively enlists, fights alongside his fellow troopers, becomes jaded and disillusioned with the empire, and finally joins the Rebel Alliance. That way, viewers could see the story of a rank and file grunt who doesn’t share the empire’s ideologies.

A stormtroopers movie or series could also address an issue that Iraq and Afghanistan veterans have had to grapple with: How do you accomplish a mission that has no clear end state?

For more than 20 years, U.S. troops have fought bravely, lost friends, and come back with physical and mental scars after they set out to achieve ambiguous goals that their elected leaders could hardly define. Strategies and tactics changed constantly but the danger service members faced did not. Troops focused on the mission without knowing if they were succeeding or not. In the end, the mission was revealed as hollow talking points masquerading as strategy. It wouldn’t be too big a stretch to apply this theme to a stormtrooper unit that’s deployed to “bring security to the galaxy,” which would be the Star Wars equivalent to a “nation-building effort.”

Marine veteran Matthew Callahan noted that both the empire and the Marine Corps have iconic imagery, themes, and stories, but not everyone who joins these groups is motivated by politics.

“A lot of folks join the service to improve their circumstances, to be part of an organization bigger than themselves, to work as a team, for upward mobility, to escape their current circumstances,” Callahan told Task & Purpose. “I’m willing to bet — with the empire being as big as it is — there’s probably several thousand stormtroopers who joined the Imperial Stormtrooper Corps for those reasons, not for the sake of empire and evil doing and everything that stormtroopers come to represent in pop culture.”

Nearly 10 years ago, Callahan — then a Marine in the public affairs field — began photographing Star Wars stormtroopers and clone troopers in combat situations, such as a casualty evacuation, as part of a photo essay that he called “Galactic Warfighters.”

In one of his most striking photographs, Callahan recreated the image of Navy Cross recipient Bradley Kasal — who later retired as sergeant major of I Marine Expeditionary Force — being carried out of Fallujah’s “Hell House” in 2004 after being wounded in a fierce close quarters battle.

Callahan told Marine Corps Times in 2016 that his pictures were not meant to criticize the U.S. government’s foreign policy, but rather to tell the stories of troops caught up in conflicts.

“Despite these epic sprawling good and evil battles, there are still just real people fighting on either side that have their own personal stories to tell,” Callahan said at the time. “Whether or not they align with the super-good or the super-evil notions in stories of the universe they’re fighting in, they’re still just people.”

There are generations worth of stories from troops and veterans who found themselves that could be used as the basis of a stormtroopers movie or series. For too long, the Star Wars universe has portrayed people in the military as mindless and soulless. It’s time to give war back to the people who fight it.