Through a mix of coincidence and hard work, Vietnam veteran Donald P. Winterhalter was recently reunited with a long-lost possession:... 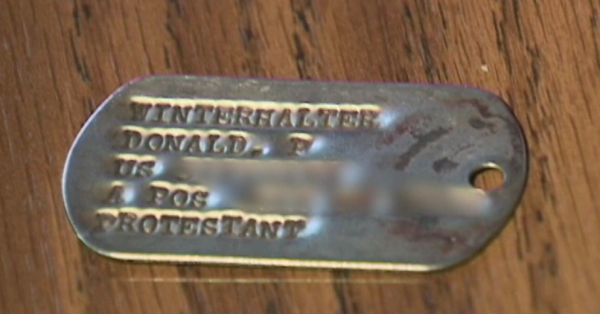 Through a mix of coincidence and hard work, Vietnam veteran Donald P. Winterhalter was recently reunited with a long-lost possession: his dog tag. Winterhalter, who served in Vietnam for nine months in 1969 with the 82nd Airborne Division, was surprised to get a call from Din Vu and Don Edwards of Vermont saying that they had recovered it.

Vu’s wife’s family lives in Hoc Mon, Vietnam, and they stumbled across the dog tag in their backyard eight years ago. Winterhalter served in that area and told ABC News that is where he likely lost it decades ago.

Winterhalter, 69, told ABC News he hadn’t thought about the dog tag in years since it was a spare that was later replaced because it had the wrong blood type engraved on the panel.

Vu and his neighbor, Don Edwards, a Desert Storm veteran, were able to track Winterhalter down and made the trip to Brookline, New Hampshire, where Winterhalter lives to deliver the dog tag in person.

“My job was to return the dog tags; that was my mission,” Vu said. “I just did my part. Mission accomplished.”