Hampshire College in Amherst, Massachusetts, made the decision to restore the American flag to full staff following a nationwide controversy... 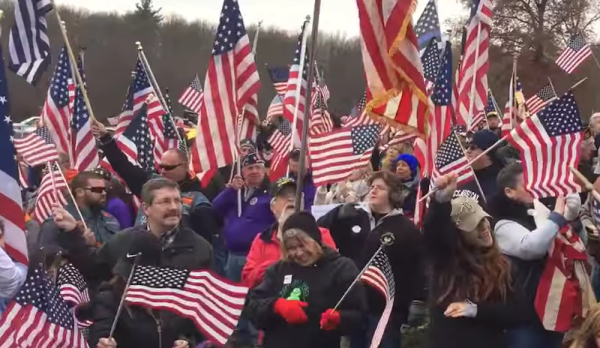 Hampshire College in Amherst, Massachusetts, made the decision to restore the American flag to full staff following a nationwide controversy about its absence from the campus.

In a press release, University President Jonathan Lash explained the reasoning behind the school’s initial decision to remove the flag, and its plans moving forward.

The controversy started when the results of the 2016 election came through, and the university chose to fly the American flag at half mast on Nov. 9 to protest “the toxic tone of the monthslong election.”

Veterans Protest As Hampshire College Removes The Flag From Its Campus »

College officials chose to keep it lowered while students and faculty members explored the meaning of the flag on their campus until Nov. 10, when it was found burned by a student. It was replaced for Veterans Day, but this desecration prompted university President Jonathan Lash to remove the flag indefinitely from the main campus pole a week later.

This decision sparked outrage among the veterans community, and caused local Veterans of Foreign Wars members to protest on the campus. On Nov. 26, nearly 400 veterans gathered on the West Street campus, proudly displaying all manner of flags, carrying picket signs, and singing “God Bless America.”

A second protest was slated for Dec. 4, and according the Facebook event, these veterans “will continue as planned to conduct a peaceful passionate display of patriotism and celebration.”

President Lash’s full memo is below:

This morning we raised the United States flag to full staff at Hampshire College after a two-week discussion period about what the flag means to members of the Hampshire community. College leadership, including the board of trustees, had decided on November 18 to lower the flag for a time to encourage uninhibited expression of deeply held viewpoints.

We are alarmed by the overt hate and threats, especially toward people in marginalized communities, which have escalated in recent weeks. We did not lower the flag to make a political statement. Nor did we intend to cause offense to veterans, military families, or others for whom the flag represents service and sacrifice. We acted solely to facilitate much-needed dialogue on our campus about how to dismantle the bigotry that is prevalent in our society. We understand that many who hold the flag as a powerful symbol of national ideals and their highest aspirations for the country—including members of our own community — felt hurt by our decisions, and that we deeply regret.

The dialogue we have experienced so far is the first step of a process. Hampshire staff and faculty have led facilitated discussions, I have held multiple focus group sessions, and all of our students, faculty, and staff have been invited to contribute their opinions, questions, and perspectives about the U.S. flag. This is what free speech looks like. We believe in it, we will continue this work on campus, and we will look for ways to engage with our neighbors in the wider community. We raise the flag now as a symbol of that freedom, and in hopes for justice and fairness for all.