On the heels of a far-ranging Military Times poll of active-duty service members, Iraq and Afghanistan Veterans of America (IAVA)... 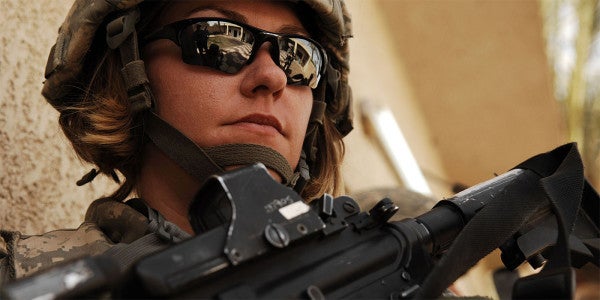 On the heels of a far-ranging Military Times poll of active-duty service members, Iraq and Afghanistan Veterans of America (IAVA) has released its own annual poll of more than 4,000 members, and one pattern seems pretty clear: Men are from Mars, and women are exhausted by them.

The annual IAVA member survey, posted online Oct. 26, isn't an end-all, be-all — no single data point is, especially a voluntary online poll conducted in February that used a drawing for two airline vouchers as an enticement to respondents. But 4,345 vets completed the survey, and among its clearest results was a yawning chasm between the genders.

Sexual discrimination and assault are perennial issues in the military, but they've gotten a renewed public focus this year amid hundreds of assault allegations against Hollywood titans like Harvey Weinstein and James Toback; high-profile incidents of sexual misconduct among top military men; concerns about a spike in suicide among servicewomen and vets; and even allegations against President Donald Trump. (In the wake of the “grab her by the pussy” audio that emerged of Trump on the campaign trail last year, at least 10 women have publicly accused the commander-in-chief of sexual assault or harassment.)

IAVA's members, as a whole, agreed that women in uniform have it tough — in the civilian world, among their male peers, and in the VA system. But about three-quarters of respondents said women get adequate respect from fellow service members in general:

Male service members give themselves high marks for treating women vets with respect, but they are also bitterly split on whether women should be eligible for any MOS. Only half of men in the IAVA poll supported full job equality for women; that's more than in previous IAVA surveys, but still a whole lot lower than the 70% of women who said all combat MOSs should be open to anyone qualified, regardless of gender:

And while a third of men think the Pentagon's on top of its sexual-assault problems, less than a fifth of women agree — and more than two-thirds of women say the military's response to sexual assault is inadequate:

One clear reason for the disconnect: More than a third of women told IAVA that they were victims of sexual assault; only 1% of men said they'd experienced an assault:

Worse still, fewer than half of the women who said they were assaulted — and nearly a third of the men — say they never reported the crime:

Why not? Possibly because they expected nothing good to come out of an investigation. Two-thirds of the men and almost three-quarters of the women who did report a sexual assault said they were retaliated against because of it:

A near-majority of women and a good number of men who'd reported assaults said taking disciplinary powers away from local commands might make them likelier to report sex crimes in the future:

When a third of all your female veteran members say they were assaulted; when only half of those say they reported; and when 7 out of 10 female victims say they experienced retaliation for saying something, you've got a serious cultural problem. When few men can volunteer that they understand women's experiences, that they want women serving in combat roles, or that the DoD needs to do more to tackle discrimination, your problem will not away quickly or easily.

In some other areas, the IAVA respondents reached broad consensus. Most worry about their health a lot more than they did as young volunteers:

Most say they were exposed to burn pits on deployment — an experience common to grunts and fobbits alike:

And most dislike politicians of all stripes, though they're a little easier on Trump than they are on former President Barack Obama — or Congress, whose popularity among IAVA members ranks lower than socialism, Jefferson Davis, Darth Vader, Emperor Palpatine, and Jar-Jar Binks among U.S. voters:

If 84% of vets can agree that Congress sucks, and most incumbent congressmen still win their seats, you have to wonder what hope women have for a fair shake in the military justice system.