The New ‘Predator’ Will Have Violence, Jokes, And Vets On A Mission To ‘Kill These F*cking’ Aliens

The new Predator reboot is coming — and you know what means: The upcoming sci-fi action flick, titled The Predator, is set... 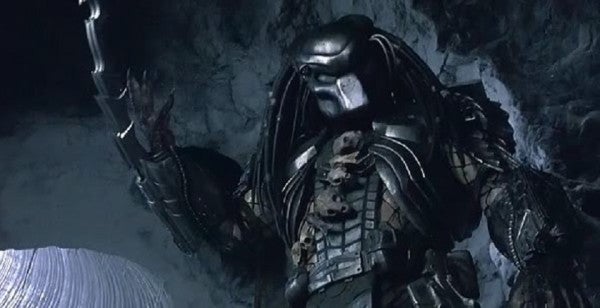 The new Predator reboot is coming — and you know what means:

The upcoming sci-fi action flick, titled The Predator, is set for a August 2018 release, and will mark the return of the iconic man-hunting alien that looks like it was repeatedly beaten with an ugly stick, since its last appearance in 2010’s Predators. And the reboot means leaving the jungle for the ‘burbs, and finally providing a backstory for why the Predators are so interested in human taxidermy.

For those who don’t recall (because you’ve spent the last 30 years living under a rock, or something), the original 1987 Predator centers around a special operations detachment dropped in the jungles of Central America for a rescue op that goes awry when an invisible alien decides it’s open hunting season on homosapiens. But, instead of close-up shots of jungle, cut to, wide shots of more jungle, the newest Predator reportedly takes place in the suburbs and center around a father and son caught in the middle of an extraterrestrial murder rampage, according to PopCulture. It’s also set after Predator 2, but sometime before the semi-futuristic Predators, making it less of an all-out reboot and something akin to a J.J. Abrams-style sequel/prequel/rehash.

Actor Jake Busey — who, in the reboot, plays the son of his real-life father’s character from Predator 2 — hinted to PopCulture that the newest flick will finally explain why the mask-rocking humanoids hunt and skin people, beyond the fact that they, you know, just really like furniture made from human hides.

“This one definitely falls in line with the original franchise in that it does focus on the technology that the Predators have,” Busey, who has some experience gunning down aliens, told PopCulture. “It focuses on what the goal of the Predators is, and what their modus operandi , and why they come to the planet, and that type of thing. It's definitely in line with the original franchise.”

Directed by Shane Black, whose comfort zone is the buddy comedy (Lethal Weapon) but with more boom (Iron Man 3)and broken bones (The Nice Guys), The Predator seems poised to hit all the nostalgia notes for a decent reboot. Black, for his part, is no stranger to the franchise, having starred as part of the ill-fated special ops team that tangled with the ghostly spine-ripping extraterrestrial in the original 1987 action flick as the character Hawkins.

The cast includes a mix of TV and movie stars, such as Thomas Jane (The Punisher, The Expanse) Edward James Olmos (Bladerunner 2049, Battlestar Galactica) and Keegan-Michael Key (Key and Peele, Keanu) to round out bloody scenes of violence with a bit of melodrama and deadpan — or more than likely, some silly antics.

Actors Thomas Jane, Keegan-Michael Key, and Trevante Rhodes on the set of “The Predator” Twentieth Century Fox photo via IMDB

Oh, and there’s also a cadre of PTSD-addled vets on their way to a psych ward, who make a jailbreak and decide “fuck that, man, let’s go kill these fucking Predators ourselves” actor Thomas Jane told the blog Film in November, before adding, “So that’s kinda cool!”

Yeah, kinda cool sounds about right, assuming our intrepid heroes don’t go rogue and join up with their alien adversaries and hijack an LAV…

If nothing else, given Black’s involvement, we’re likely to get some witty back and forth, and a few quotable lines — seeing as the cast of characters are all combat vets, we’d expect nothing less.

Oh, and lest we forget, there’s not going to be any of the PG-13 crap, so get ready for all the special-effects gore that comes with plasma-cannon-rocking aliens and Wolverine-style claws. Black confirmed in a tweet that we’re in for a fuck-ton of carnage.