When Vincent “Rocco” Vargas got the word that he’d been cast in a pilot spin-off of FX’s Sons of Anarchy,... 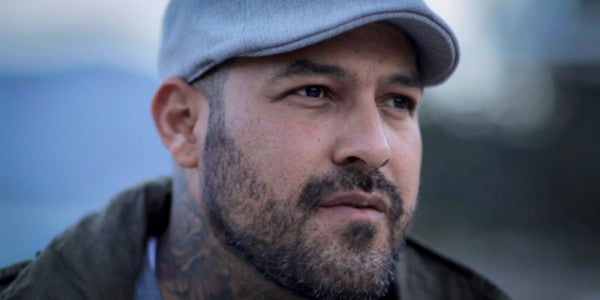 When Vincent “Rocco” Vargas got the word that he’d been cast in a pilot spin-off of FX’s Sons of Anarchy, he knew there was going to be one big problem: He had no idea how to ride, despite playing a member of a motorcycle gang. “Dude, it’s scary,” Vargas told Task & Purpose.

The first time on a motorcycle is liable to raise anyone’s pucker factor, even if you’re a former Army Ranger like Vargas with a string of deployments to Iraq and Afghanistan under the belt.

“A lot of my life being in the military I’ve been in the mindset that I’m okay if I fucking die doing my work,” Vargas said. “I guess you come to terms with dying if you go to combat, because it’s a job you picked.”

That said, Vargas admits cruising past traffic at high speeds is exhilarating, especially when it’s for a role in a TV series. The upcoming show, Mayans MC, written by Sons of Anarchy director Kurt Sutter, picks up in the aftermath of Jax Teller’s death at the end of season seven, and follows the southern California chapter of the Mayans Motorcycle Club. Unfortunately, we'll have to wait a bit before we see Vargas on FX: The pilot was pushed back for reshooting and wrapped Nov. 8, so there’s still no confirmed air date.

It’s been a pretty busy 18 months for the Ranger-turned-entertainer. Last year saw Vargas starring in Range 15, followed by a documentary about the film, Not A War Story, which premiered this month. On top of all that, there were the podcasts, online skits, and weekends spent screaming at Army privates in Salt Lake City, Utah, where Vargas serves in the Army Reserve as a drill sergeant.

Though he couldn’t go into detail about the show’s plot, Vargas had a few things to say about Mayans MC in general and his character in particular. Oh, and some other thoughts, like how to make the switch from a niche space to the mainstream; who does and doesn’t get military humor (ahem, civilians, and actually a few vets, too); and the dangers of overplaying the “broken vet” card in film and television.

“As you know, the Mayans from Sons of Anarchy, started in northern California with Marcus Alvarez being the president and founder, and he’s called the ‘Godfather,’ and our chapter is the southern California chapter, and, you know, there’s very similar conflicts from Sons of Anarchy. There’s gonna be all kinds of issues that our motorcycle club runs into and we’ll see how we deal with them.”

That means punching people in the face. A lot.

“My character is a guy named Gilly, who is Gilberto Lopez, an MMA fighter. What he lacks in wit, he makes up for in brute strength — that’s pretty much the character I’m playing. I don’t really have any details on exactly when it’ll be out. It’ll have to be approved by FX, but the way it’s looking is that it’s going to get the thumbs up.”

How he flips an emotional switch for the camera.

“All acting is: you’re recreating human emotions. I think a lot of guys who have lived a very similar lifestyle as I have, have probably ran the gamut of human emotions in combat: anger, to fear, to everything from missing family, and all you can think of … I’ve lost friends in combat, and it affects me if I allow myself to recreate it, relive it mentally. So I’ll be able to expend some of those emotions for the camera by pulling from my own experiences.”

Not everyone appreciates gallows humor, even other vets.

“I think Range 15 was a good indicator of that. A lot of the military demographic loved it, they enjoyed it, and there was a good handful that hated it. I think a lot of the civilians who watched it didn’t understand the military and veteran humor, the banter, so it was kind of hit and miss … Sometimes we have a darker humor because we’re dealing with some serious things in combat. It’s our way, I guess, of debriefing ourselves, of getting through it. Not necessarily everyone agrees to that, and not everyone does that, but you have a good majority that does. That’s the same when it comes to firefighters, doctors, nurses — people in any field dealing with all these stressors, they all seem to handle it with some kind of humor.”

Related: 10 Questions Only A Veteran Would Ask Vincent ‘Rocco’ Vargas »

The media has created a false narrative about veterans in America.

“You know, I think mainstream media, social media as well as television and news has portrayed veterans in a more negative light than they have positive. I think what is more appealing to the average person is the hardships, the depression, the post-traumatic stress, and so in seeing that, you’ve had 15 years of mainstream media telling veterans that we’re broken, that we’re suicidal, or that we have suicidal issues or tendencies and that we all have post-traumatic stress. After years and years of hearing that as veterans, you start to have guys who are in awful situations who actually start to believe it. I think all that is a false narrative.”

Be okay with failure.

“I’m resilient. Why am I resilient? Because I’ve done some hard training in my career. I’ve failed at times and continued to move forward. That’s a big one for me. I’m okay with failure. But as long as I’m continuing to learn why I failed, get better at it, and improve myself, that’s good. People need that in the civilian world.”