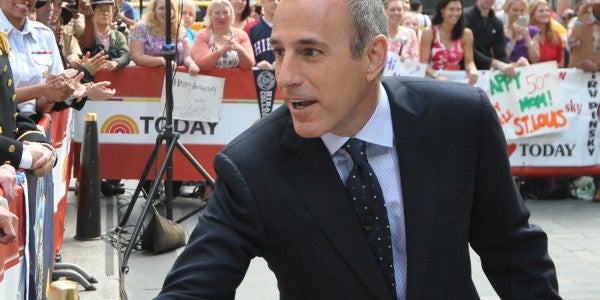 An Iraq War combat veteran recounted in detail on Thursday how disgraced NBC host Matt Lauer aggressively pursued a sexual relationship with her while she worked as an assistant at the network nearly two decades ago.

In an extensive first-person account published by Variety, Addie Zinone said she was 24 years old when Lauer sent her an instant message “out of the blue” one day in July 2000.

“I hope you won’t drag me to personnel for saying this, but you look fantastic,” Lauer’s message, which was published along with Zinone’s account, read. “I don’t know what you have done or what is going on in your life…but it’s agreeing with you.”

That was the first of a long series of sexually-suggestive messages that Lauer sent Zinone complimenting her on her looks.

“I didn’t know what to do,” the now 41-year-old West Virginia woman wrote. “He was obviously flirting. But I’d never seen anything like that from Matt before. As a 24-year-old production assistant, I had no idea how to interpret that. I could truly embarrass myself if I said something like, ‘Where are you going with this?’”

Their exchanges remained plutonic until one day after lunch, Lauer — who was in his 40s and newly married — told Zinone to meet him in a dressing room.

“Matt, think about this first…you have a wife,” Zinone responded.

That was the first time Zinone had sex with Lauer and while she stressed that the encounter was “consensual,” she said it had a devastating impact on her.

“I changed physically. I changed emotionally. Fear crept into my life. I became unsure of myself,” she said. “Any confidence I had was gone. For him, it was a conquest.”

Zinine slept with Lauer several more times, but all the while she felt like she was shouldering a massive burden.

Lauer would constantly comment on her looks and one day tried to coax her into having sex in his office.

“I sat across from him, and he pushes a button from his desk and the door shuts,” Zinone wrote. “It was embarrassing, because his secretary was sitting outside. He wanted to do stuff. I was like, ‘No. I’m so in over my head. I’m not a performance artist.’”

Lauer was fired from NBC last month amid disturbing allegations that he sexually harassed a number of female staffers during his 20-year tenure as a “Today” show anchor. Like Zinone, many of the women who have accused Lauer of sexual misconduct recalled that the 59-year-old newsman would ask them into his office and then press a button that would lock the door behind them.

Zinone said her relationship with Lauer left her so depressed that she left her prestigious NBC job and joined the army. She ended up getting deployed to Iraq twice.

“I didn’t want to start my career being known as one of Matt Lauer’s girls,” she wrote.

Zinone stressed several times that while her encounters with Lauer were consensual, she felt like she was being held “hostage.” She also said that she believes all the women who have accused Lauer of misconduct.

“He went after the most vulnerable and the least powerful,” she wrote. “He understood that we were going to be so flattered and so enthralled by the idea that the most powerful man at NBC News is taking any interest in us.”

Just before her second deployment to Iraq in 2008, Zinone received a phone call from a former “Today” colleague who said she wanted to do a story about her transition from news producer to soldier.

But, a few days later, as Zinone was in the airport about to leave for Iraq, the co-worker called back with some bad news.

“Did something happen on ‘Today?’” the staffer asked. “When I went to pitch this story, a producer said, ‘We’re not going to cover her. Addie said something bad about the show.’”

Zinone was stunned. She had never met the producer in question and never said anything “bad” about the program.

“That’s when I knew I could never get rid of this thing,” Zinone said.