The Fight Against Military Sexual Trauma

Military sexual trauma has been extensively covered in the news. Most recently in July, the Service Women’s Action Network, along... 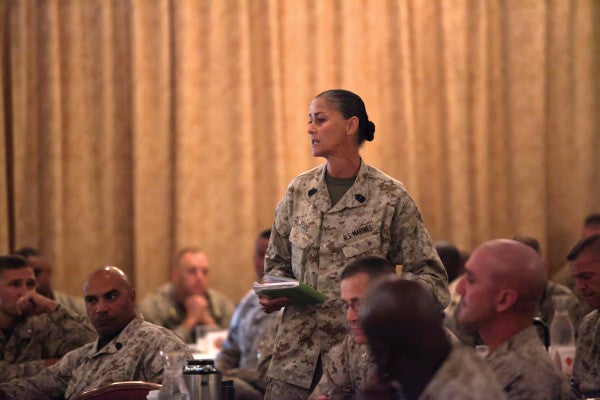 Military sexual trauma has been extensively covered in the news. Most recently in July, the Service Women’s Action Network, along with Vietnam Veterans of America, filed a lawsuit against the Department of Veterans Affairs because it refuses to change its rules on processing benefit claims for survivors of military sexual trauma.

However, there is one aspect of military sexual trauma that is often left out of the media and that is the effect military sexual trauma has on the women and men who have endured it. Having just awakened to what it has done to my own self-esteem for the past 33 years, I thought there was not much really to discuss, but I was wrong.

The shame and stigma attached to sexual assault makes it a difficult conversation to have in public, or even in private. Just hearing the phrase “military sexual assault” makes non-victims cringe, so imagine what it does to the victim. It may be surprising to some that in 2012, there were an estimated 26,000 incidents of sexual assault in the military, of which nearly half of the victims were men. Further, policies like that held by the VA, which places the burden of proof on the victim in order to receive healthcare benefits for military sexual trauma, discourage victims from coming forward and reporting the incident.

However, victims become survivors by coming forward with their experience and getting help. In my own experience, I really didn’t understand that male victims’ self-esteem suffered as mine had, but I realized it recently in a new self-esteem empowerment group for which I signed up at the Miami VA hospital. The first week there was only one male. By the third week on Friday, there were three. I looked around the room and I thought, “Wow, these people suffer from low self-esteem as a result of military sexual trauma or abuse.”

The trauma of rape, molestation or abuse is like a worm burrowing down into the earth. The trauma burrows down into one’s essence, their soul, their psyche. It leaves scars like a bad tattoo and takes years for someone to realize his/her self-esteem has been affected so deeply. Individuals might avoid dealing with the trauma by drinking, drugging or self-medicating, sleeping around, or all of the above. Growing up, I never had a date in high school except for the prom. I never learned what to expect from a relationship with a man or how to have boundaries. Now I know why I drank so much when I was 20 and 21 years old. By 10:00 in the mornings, I was opening a bottle of gin when I was stationed in Turkey. Now I know why. I was trying to drown out my subconscious pleading, the young 18-year-old Mary crying out for help.

Sexual trauma stunts your emotional growth. It leaves you stuck at the age in which it occurred, in my case, age 18, practically still a child. By the time I started my group therapy in Miami for military sexual trauma and post-traumatic stress, my emotional age was closer to 25. The insidiousness of trauma such as rape turns one into a people pleaser or a person who always says no to everything, depending on the individual. In my case, all my life I have hardly said no to anybody about anything, but being a people pleaser is draining. It compounds the shame you already have for being a victim and the blame you have laid on your shoulders, sometimes for years.

Support groups can change the way veterans who have been victimized see themselves and their trauma, so they can start to live rewarding and fulfilled lives, whatever that means to each individual. The Service Women’s Action Network has a number of resources available on its website for servicemen and women who have endured military sexual trauma, from licensed mental health professionals who offer free, confidential, psychological treatment for military sexual trauma, to legal counsel and assistance submitting disability claims.

The first step to surviving military sexual trauma is to recognize that you are not alone. Acknowledging this will help you reach out for the support you deserve.