The Case Against Being Too Sensitive In The Military, Or After

Editor’s Note: This article has been modified from its original version, which was published on the personal blog of Chris... 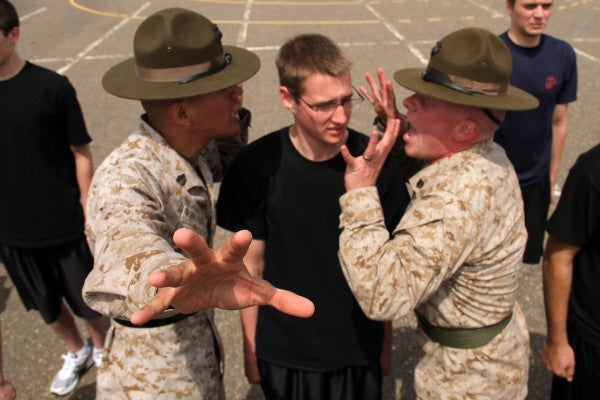 Editor’s Note: This article has been modified from its original version, which was published on the personal blog of Chris Hernandez.

When I joined the Marines, I met a man who had survived a helicopter crash during a training exercise. The first time I saw him, his head and face were covered in burn scars. A balloon filled with saline that looked like a dinosaur’s crest was implanted in his scalp to stretch the skin so hair could grow. Something that looked exactly like the checkered buttstock of an M16A2 was imprinted on one side of his head. He greeted me when I checked into my unit, and totally ignored the shocked expression I must have had when he approached. He shook my hand, asked a few questions, then left with a friendly “See you later, PFC.” His demeanor left me with the absurd thought, Maybe he doesn’t know how strange he looks.

He had been assigned to my reserve unit while undergoing treatment at a nearby military burn unit. I wound up becoming friends with him later, and eventually worked up the nerve to ask him about the crash. Of course, I quickly followed my question with, “But if you don’t want to talk about it, nevermind. Sorry.”

He brushed off my concerns. “Nah, no problem. The day I can’t talk about it is the day it starts to haunt me.”

Related: The case against being condescending »

He told me about loading up with his platoon in the helicopter that day. He described what it was like to see the ground coming through the window and realize they were about to crash. He talked about grabbing his seat belt release, being knocked unconscious on impact by his rifle butt-slamming into his temple, and waking up on the floor with his head on fire. He told me how he crawled toward the exit, in flames, past screaming, burning Marines trapped in their seats. He recounted his memory of shouting that he would come back to help them. He told me how he managed to drag himself over the edge of the helicopter’s ramp and fall into a rice paddy. He told me about other Marines who saw the crash and ran to save him and some others. He talked about all the friends he lost that day, more than a dozen. He talked about how much he missed being an infantryman, and how he had made peace with the fact that he could never be one again.

What struck me was how easily he was able to tell the story. I had never heard of someone making a decision not to let trauma affect his or her life. I had a great uncle, still alive then, who had been a Marine in the Korean War. He came back traumatized, took years to get back to normal, and to his dying day never told anyone in the family what he experienced. Even after I became a Marine, he gave me only the barest details of his service. As far as I know he never told his Marine son either. Unlike my friend, my uncle couldn’t talk about his trauma.

I’ve experienced trauma myself. I don’t know how many murder scenes I’ve worked as a police officer. I remember the shock I felt when I walked up to a car after a seemingly minor accident and saw a two year old’s head lying on the floorboard. I stood helplessly outside a burning house as a 92-year-old woman died inside, while her son screamed hysterically beside me. For years after my time as a soldier in Iraq, I’d have a startle response if I unexpectedly saw a flash, like from a camera, in my peripheral vision (it reminded me of flashes from roadside bombs). Soldiers near me were shot, burned, or killed by weather in Afghanistan.

My childhood wasn’t rosy either; early one morning when I was eight I heard pounding on our kitchen door, and was terrified to see a family member stumble into the house covered in blood after being attacked by a neighbor. Even today, after 35 years, I still sometimes tense up when I hear a knock at the door. When I was 10, my 11-year-old best friend committed suicide because of a minor sibling dispute. He wrote a note, left a will, snuck his father’s pistol from a drawer and shot himself. I was severely affected by his death, and 10 years later, got a copy of his suicide note from the city morgue. After I read it, I finally felt that I could heal from that horrible event.

I’m no stranger to trauma, and I’ve dealt with it by writing and talking about it. I suppose I’ve always defined “trauma” the traditional way: a terrible experience, usually involving significant loss or mortal danger, which left a lasting scar. However, I’ve recently discovered my definition of trauma is wrong. Trauma now seems to be pretty much anything that bothers anyone, in any way, ever. And the worst “trauma” seems to come not from horrible brushes with death like I described above; instead, they’re the result of racism and discrimination.

Over the last year, I’ve heard references to “microaggressions” and “trigger warnings.” Trigger warnings tell trauma victims that certain material may “contain disturbing themes that may trigger traumatic memories for sufferers” — it’s a way for them to continue avoiding what bothers them, rather than facing it (and the memories that get triggered often seem to be about discrimination, rather than mortal danger). Microaggressions are minor, seemingly innocuous statements that are actually stereotype-reinforcing trauma, even if the person making the statement meant nothing negative.

Here is an example of “trauma” from the Microaggression Project, a blog intended to provide visual representations of daily “microaggressions.”

My dad jokes with my younger sister that he remembers selling Girl Scout Cookies when he was a Girl Scout. She laughs, understanding the fact that since he’s a boy means that he could not have been a Girl Scout. Thanks, Dad. I’m a boy and a formal Girl Scout.

The assumption that Girl Scouts will be girls. That causes trauma.

As one might expect, microaggressions and trigger warnings are most popular in our universities. In late 2013, a group of UCLA students staged a sit-in protest against a professor for — no joke — correcting their papers. These “Graduate Students of Color” began an online petition stating, “Students consistently report hostile classroom environments in which the effects of white supremacy, patriarchy, heteronormativity, and other forms of institutionalized oppression have manifested within the department and deride our intellectual capacity, methodological rigor, and ideological legitimacy. Empirical evidence indicates that these structural and interpersonal microaggressions wreak havoc on the psychophysiological health and retention rates of People of Color. The traumatic experiences of [Graduate School of Education and Information Studies] students and alumni confirm this reality.”

In addition to correcting grammar, the professor insulted these students by changing “Indigenous” to the proper “indigenous” in their papers, thereby reinforcing white colonial oppression of indigenous people. Oh, and he shook a black student’s arm during a discussion: “Making physical contact with a student is inappropriate, added, and there are additional implications when an older white man does so with a younger black man.”

I’ve reviewed these reports of trauma, and have reached a conclusion about them. While I mean this in the nicest way possible, I don’t want victims of microaggressions or supporters of trigger warnings to doubt my sincerity.

Yes, fuck your trauma. My sympathy for your suffering, whether that suffering was real or imaginary, evaporated when you demanded I change my life to avoid bringing up your bad memories. You don’t seem to have figured this out, but there is no “I must never be reminded of a negative experience” expectation in any culture anywhere on earth.

If your psyche is so fragile you fall apart when someone inadvertently reminds you of “trauma,” especially if that trauma consisted of you overreacting to a self-interpreted racial slur, you need therapy. You belong on a psychiatrist’s couch, not in college dictating what the rest of society can’t do, say, or think. Get your own head right before you try to run other people’s lives. If you expect everyone around you to cater to your neurosis, you’re what I’d call a “failure at life,” doomed to perpetual disappointment.

Oh, I should add: fuck my trauma too. I must be old-fashioned, but I always thought coming to terms with pain was part of growing up. I’ve never expected anyone to not knock on my door because it reminds me of that terrifying morning decades ago. I’ve never blown up at anyone for startling me with a camera flash (I’ve never even mentioned it to anyone who did). I’ve never expected anyone to not talk about Iraq or Afghanistan around me, even though some memories still hurt. I don’t need trigger warnings because a book might remind me of a murder victim I’ve seen.

And before anyone says it, being Hispanic doesn’t make me any more sympathetic to people who experience nonexistent, discriminatory “trauma.” Discrimination didn’t break me, or my parents, or grandparents. I’ve been discriminated against by whites for being Hispanic. I’ve been threatened by blacks for being white. I’ve been insulted by Hispanics for not being Hispanic enough. Big deal. None of that stopped me from doing anything I wanted to do. It wasn’t trauma. It was life.

Generations of Americans experienced actual trauma. Our greatest generation survived the Depression, then fought the worst war in humanity’s history, then built the United States into the most successful nation that has ever existed. They didn’t accomplish any of that by being crystal eggshells that would shatter at the slightest provocation, they didn’t demand society change to protect their tender feelings. They simply dealt with the hardships of their past and moved on. Even my great uncle, the Korea Marine, never expected us to tiptoe around him. He wouldn’t talk about his experience, but he didn’t order us not to.

So again, fuck your trauma. If your past bothers you that much, get help. I honestly hope you come to terms with it. I hope you manage to move forward. I won’t intentionally say anything to dredge up bad memories, and don’t think anyone should actively try to harm your feelings.

But nobody, nobody, should censor themselves to protect you from your pathological, and pathologically stupid, sensitivities.