The US Must Be Realistic In Its Fight Against ISIS

Recent airstrikes in eastern Syria targeted Islamic State of Iraq and Syria strongholds as well as a new threat known... 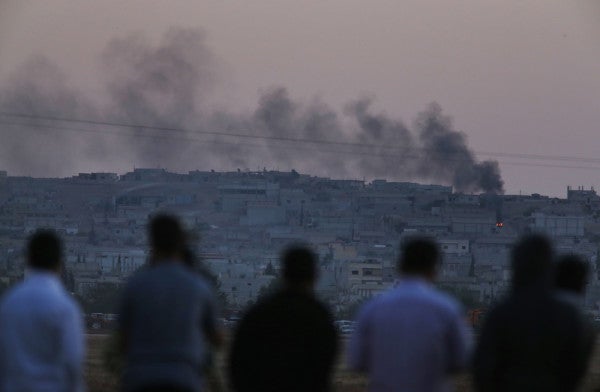 Recent airstrikes in eastern Syria targeted Islamic State of Iraq and Syria strongholds as well as a new threat known as the Khorasan group. Both are considered growing international threats in light of their land grab in northern Iraq, recorded execution of westerners, and threats to U.S. military families in the homeland. With ordnance dropped on familiar locations in Iraq and new targets in Syria, it is easy to think, Here we go again, another war. Veterans and civilians alike can see the counterterror, counterinsurgency war to come despite the artificially constraining “no boots on the ground” political promise.

Sure, ISIS is a pernicious threat — radically jihadist, anti-Western groups that behead innocent aid workers and journalists generally are — but not one presented in the same way that we’ve seen in the recent past. There was no immediacy. There was no build up to defeating a regional threat like there was for Iraq (despite faulty intelligence and questionable motivations). There was no quick retaliation like we saw after the attacks of 9/11 and the start of Operation Enduring Freedom a month later. ISIS went from being a JV team to some kind of existential threat over a year — from afterthought to U.S. Central Command’s main effort.

The start of the Syria-Iraq air campaign seemed very Clinton-esque. Tomahawk missiles launched against remote locations in an austere environment smacks of the American response to the al-Qaeda attacks on the U.S. embassies in Kenya and Tanzania. Following the embassy bombings in 1998, President Bill Clinton authorized Operation Infinite Reach, a missile attack on al-Qaeda camps in Afghanistan and a pharmaceutical factory in Sudan, the latter believed to be manufacturing chemical weapons.

Usha Sahay made the comparison between Operation Infinite Reach and deterrence efforts in Syria last year at War on the Rocks. Citing Micah Zenko, she wrote,

… have become increasingly attractive to civilian leaders because they carry the political advantage of appearing to communicate a message of strength, without incurring the political costs of sending troops into combat. Signaling, then, has become an accepted justification for military force.

Since the end of the Cold War, we have re-entered a familiar era of war-making without actual war, of projecting physical power without staying power. And current and near-term contingency operations now resemble the policing and deterrence actions of the mid-to-late 1990s, specifically Operation Infinite Reach. In the end, defeating ideologies — desirable to secure our national interests in both eras — may be at too high, if not an impossible, cost.

It can be said that the U.S. was weary of war following the disastrous Battle of Mogadishu and Black Hawk Down. The images of an abused Michael Durant and American bodies dragged through the dusty streets of Mogadishu prevented President George H.W. Bush from applying sizeable ground forces in future operations. It was a key consideration in not intervening in the Rwandan genocide in 1994. It led to largely air campaigns in future NATO conflicts in Bosnia and Kosovo. And it may have been key in launching missiles during Infinite Reach instead of the Rangers.

Despite the relatively high approval numbers for a ground invasion in 2014, political leadership may be all too keen on not committing too many boots on any ground. That may be due in part to the lessons of the 1990s, fear of another war with its costs in blood and treasure, or more likely, a deep-seated understanding that the military is the wrong tool to use in this situation.

Kicking up dirt in the desert, then in Afghanistan and Sudan and now in Syria and Iraq, may be tacit acknowledgements that a terror ideology can never be defeated, only marginalized. In both situations — al-Qaeda in 1998 and ISIS in 2014 — the intent appears to be keeping the bad guys off balance enough to curtail their influence without committing to a significant ground fight.

I am reminded of Clausewitz’ iron calculus of resistance (utmost exertion of powers) that states an enemy’s ability to resist the opposition is a product of its means and will. To overcome the enemy, the logic goes, we must reduce either his means (i.e., funding, troops, weapons) to conduct war, his will to continue fighting, or both. The thing about both al-Qaeda and ISIS is that their ideology, both decidedly anti-West, induces a high level of will to resist. That leaves reducing means. Lobbing enough munitions may help in this reduction by taking out enough ISIS thugs and their gathering places, but it may only bring them to a slow roll or a halt. Degradation may be in the cards, but destruction may be too much to ask.

Operation Infinite Reach went down the same means-reduction road by attempting to kill key al-Qaeda leaders, to include Bin Laden, and a possible chemical weapon plant. Although U.S. Tomahawk missiles hit the right spots in Afghanistan and Sudan, they completely missed their targets. Bin Laden, possibly tipped off, was somewhere else the night of the attack and the Sudanese pharmaceutical company was making no nerve agent. It was the classic split between accuracy and precision.

The rest of what we know about al-Qaeda, post-1998, is history. And although reduced in numbers, al-Qaeda’s ideology is still just as influential as it was in 1998. Likewise, ISIS numbers may be cut down, but its ideology remains attractive to many. Bombing may slow them, but without dangerous American men and women on the ground with guns to stop it, ISIS is free to operate when not under drone surveillance.

Hopefully, we are more realistic about how to handle the threat we see today, that is, not see ISIS as a significant state actor that can be defeated, but disrupted and marginalized. Further, let’s be realistic in not assuming we are powerful enough to crush an ideology. Bombing a group long enough does not change minds. It may only galvanize them.