The Psychology Of Why People Join Terror Movements

“We will conquer your Rome, break your crosses, and enslave your women, by the permission of Allah, the Exalted. This... 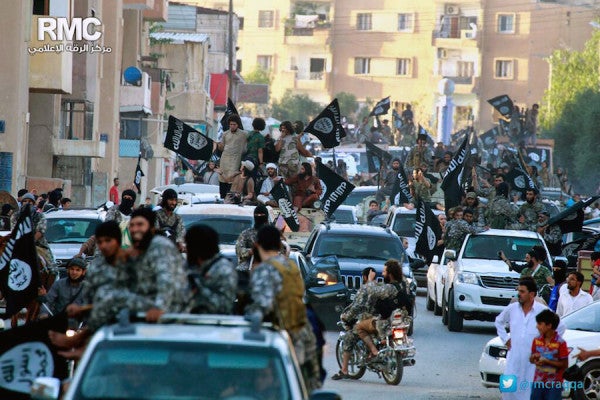 “We will conquer your Rome, break your crosses, and enslave your women, by the permission of Allah, the Exalted. This is His promise to us; He is glorified and He does not fail in His promise. If we do not reach that time, then our children and grandchildren will reach it, and they will sell your sons as slaves at the slave market.”

If this passage from the Islamic State of Iraq and Syria’s magazine “Dabiq” sounds like something from the Middle Ages, that is because much of it is. The magazine’s name is based off of a location in Syria where, according to some ancient Muslim myths, a final apocalyptic battle will be fought between Muslims and the kuffar, or unbelievers.

Why in 2014 someone would seek to ascribe to these values is confounding to most people. A common perception of ISIS is that it’s composed of fanatics and psychopaths, but most of the fighters are not clinically insane, though many of them are practically illiterate when it comes to Islam.

“One of the things that has been pretty well discredited is this notion that there is something particularly abnormal or crazy, something pathological. That is something the data has not borne out,” Dr. Tony Lemieux of the National Consortium for the Study of Terrorism and Response to Terrorism at the University of Maryland told Task & Purpose.

It’s a widely accepted idea that social alienation and poor personal prospects are the prime drivers of radicalization. “Individuals who become terrorists often are unemployed, socially alienated individuals who have dropped out of society,” wrote Rex Hudson of the Library of Congress in the paper “The Sociology and Psychology of Terrorism” in 1999.

But ISIS recruits come from all over the world, in both nationality and class, and muddles the argument that poverty or a feeling of exclusion from society are the main culprits of radicalization.

Nailing down what exactly drives men and women with no personal stake in the conflict to join by the thousands is problematic because there is no one motive.

“Social isolation isn’t actually a universal factor in the radicalization process. Many lone-actor terrorists are, but then again, many are not. They have families, co-workers, neighbors. They are simply more dedicated to the fantasy of involvement in terrorism than they are to their ‘traditional’ social circle,” said Dr. John Horgan, of the Center for Terrorism and Security Studies at the University of Massachusetts.

“For a very long time, there was a notion that there was a profile for a terrorist,” according to Lemieux. “Despite years of efforts to show what that was, they have all been fairly fruitless pursuits.”

But there are ample reasons why ISIS has drawn so many foreign recruits.

ISIS has acquired a level of manpower, resources, and sheer firepower never before seen in an Islamic terrorist group, edging out even regional heavyweights like Hezbollah. Combine this with a professed desire to conquer a new state, and it gives the group a degree of legitimacy in certain points of view.

“Al-Qaeda has never taken the kind of physical territory that ISIS has. What ISIS has done has taken the ideas and expanded on them, but has also demonstrated strength and potency by winning battles and conquering territory,” Lemieux said.

The highly developed media operations of ISIS, believed to be mastermind by an American citizen, is similarly without precedent.

“It is not to say there hasn’t been precedent for beheading videos, we’ve seen a number of those over the past decade. What’s different is the sheer number of videos and the level of atrocities. For well over a year, they have put together many video’s showing crucifixions, mass executions, people digging their own graves, in ways that far outstrip whatever has been done prior,” Lemieux explained.

The gruesomeness of much of the propaganda serves a purpose all its own. Besides spreading terror on the battlefield and among the populations it has conquered, it has given ISIS a level of publicity that has greatly aided its recruiting efforts.

“Part of the brutality may seem like violence for the sake of violence, but it served the strategy of getting everyone’s attention,” Lemieux said. “The beheading of James Foley gave them a level of international recognition that they hadn’t had. This showed a strong degree of choreography.”

But considering the atrocities, which ISIS has done more than any other group to publicize, it can be difficult for the vast majority of people to grasp the group’s appeal. Lemieux said that when potential recruits become immersed in ISIS propaganda, they start to see it from a different viewpoint, and are often drawn by the spoils that ISIS promises.

“Part of the dialogue is that it’s not that bad here, it’s good here. You can come and get married, and be part of this new place and new idea. The atrocities are not viewed as mass murder, it’s viewed as legitimate combat. The idea is that you can come to Syria and Iraq and join this conflict of huge proportions, be part of something significant,” explained Lemieux.

In a recent Washington Post article, author Michael Muhammad Knight detailed what influenced him to give up his American Catholic high school to study at a madrassa in Pakistan. “It wasn’t a verse I’d read in our Qur’an study circles that made me want to fight, but rather my American values. … Like so many Americans moved by their love of country to serve in the armed forces, I yearned to fight oppression and protect the safety and dignity of others.”

This could be every young person who ever ran off to war at their countries behest, looking for somewhere to belong and a cause to believe in, and also explains why so many Western Muslims have left often comfortable lives to join the Islamic State to fight in Syria and Iraq. Their numbers have been widely estimated to be in the thousands.

Whatever individual motivations might be, ISIS’s recruiting strategy is clearly working, and the escalating war with the United States and its allies might be exactly what they are hoping for.

“We need to think clearly about countering the narrative they are putting forward without feeding into it,” Lemieux said. “What they really want to happen is a total war. This is what they are striving for, this is the reaction they are hoping for.”