The battle for the Iraqi city of Tikrit is underway after more than a week of fighting between Iraqi army... 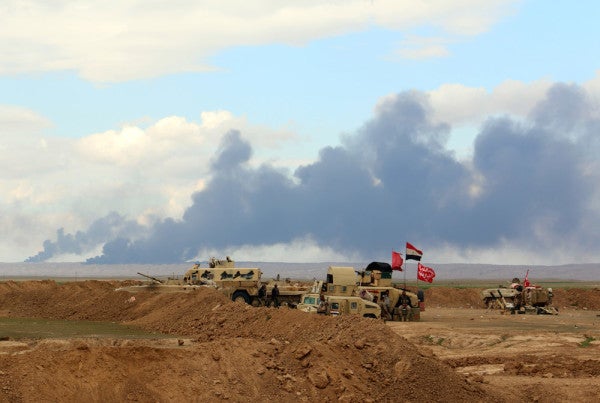 The battle for the Iraqi city of Tikrit is underway after more than a week of fighting between Iraqi army soldiers and Shiite militias against ISIS militants. Over 30,000 soldiers and militiamen backed by jets and helicopters launched a much-anticipated offensive against the ISIS forces currently in control of the city.

For many, the city of Tikrit has special significance, being the birthplace of former dictator Saddam Hussein and his power base of supporters during his decades-long rule. It is also the birthplace of Saddam’s predecessor, former President Ahmed Hassan al-Bakr, and the traditional seat of the Iraqi Ba’ath Party. For almost 40 years, Iraq’s politics and governance was dominated by natives of Tikrit. While al Anbar province may be the tribal “heart” of Sunni Iraq, Tikrit is its political and intellectual “head.”

Over the last few months, ISIS has already been knocked back on its heels by a newly resurgent Iraqi military, attacks by the Peshmerga in the Iraqi Kurdish region, and U.S.-led coalition airstrikes. Yet while its momentum has been checked, ISIS remains an undefeated and extremely capable force. Through polished outreach via social media, the group continues to draw new recruits from Sunni communities in both the Middle East and across the globe. In Syria, ISIS continues to carry on its fight against the Assad regime and moderate rebel groups alike, and over the last few months has metastasized in several other countries, such as Pakistan, Libya, Indonesia, and the Gaza Strip.

One major threat to ISIS is a Shiite-dominated Iraqi military backed by almost exclusively Shiite militias. Recently, these militias have swelled with thousands of new recruits after Iraq’s most influential Shiite cleric, Grand Ayatollah Ali al-Sistani, called for Iraqis to take arms to defend their homeland. This force is being led, at least in part, by Iranian Gen. Qassem Soleimani, commander of the powerful Revolutionary Guard's Quds Force. The Iranians have also backed the force with weapons, training, ammunition, and dozens of military advisors. ISIS, by contrast, is a mix of foreign fighters and disaffected Sunnis from across the region, fighting to maintain its gains in Iraq and its grasp on Sunni-dominated territory.

Tikrit holds serious strategic value to both sides. To successfully capture Mosul, the purported capital of ISIS, Iraqi forces must first reclaim the city of Tikrit. Doing so will put Iraqi forces within striking distance of Baiji, a strategic staging point from which to launch offensive operations on Mosul; it will also help secure lines of communication south to Baghdad and enable Iraqi forces to better cut off the movement of ISIS forces between the provinces of Anbar and Saladin. Success in Tikrit would provide a significant boost to the confidence of the Iraqi military, which will be critical given the tough fights that await them in Mosul and Fallujah. Correspondingly, losing Tikrit would also be a serious blow to the morale of ISIS forces and leadership; instead of growing across the Islamic world, the envisioned caliphate would be losing ground.

Despite the strategic value of Tikrit, the true significance of the battle is a symbolic one. A Shiite-led assault on Tikrit may become the ultimate extension of the Sunni versus Shiite conflict first espoused by ISIS founder, a Jordanian named Abu Musab al-Zarqawi. Zarqawi, who was killed in a U.S. airstrike in 2006, declared all-out war on Shiites in Iraq and orchestrated the beginnings of the sectarian violence across the region, unleashing suicide bombers on Shiite civilian targets, which invited reprisals against Sunni civilians by Shiite militiamen. Much of the escalation of sectarian violence in Iraq over the last decade can be attributed to the chain of events first set in motion by Zarqawi. After all, from a sectarian perspective, the fight pits Sunni insurgents defending Sunni-dominated territory against the Shiite forces of Iraq and Iran — a scenario that plays perfectly into the apocalyptic end-of-time worldview espoused by many adherents of ISIS.

It was Zarqawi’s vision to spark a Sunni versus Shiite civil war. Now, ISIS, the modern iteration of the organization he founded, is waging a battle of conquest and survival against the very forces Zarqawi swore to exterminate. Losing Tikrit to those very same forces, and Mosul after that, would be the ultimate indictment of Zarqawi’s stated goals.

Ultimately, the outcome of the battle for Tikrit is uncertain. How the battle is conducted will determine whether Zarqawi’s vision will bear fruit. There is no U.S. or coalition oversight of the Iraqi forces surrounding Tikrit. Many of the Iraqi government’s militia forces are suspected of having committed atrocities against Sunni civilian populations after they retook other towns, including alleged revenge killings and summary executions.

The risk of reprisal attacks against Sunni civilians has been felt at the highest levels of Iraq’s government. On Mar. 5, Prime Minister Haider Abadi addressed the issue of sectarian attacks against civilians when he urged troops “to respect human rights and preserve property.” Abadi also spoke with U.N. Secretary General Ban Ki-moon and assured him that Iraqi leadership would “punish any transgression against civilians in the areas of military operation.”

As the assault on Tikrit gets underway, the care and consideration for the safety of Sunni civilians will be key to the battle’s legacy. Major reprisal attacks and indiscriminate bombings of civilian areas will likely cause hundreds of thousands of Iraqi Sunnis to flee to Mosul, further complicating any future assault on the ISIS capital, and likely boosting the ranks of extremist group.

Without the safeguarding of Sunni civilians, the attack on Tikrit may have the unintended consequence of literally driving the Sunnis into the hands of ISIS; yet if done properly, it could be a huge step in defeating not only ISIS’ military prowess, but its guiding vision and the vision of its founder as well.