Iraqi Army Is Finally Gaining Ground Against ISIS In Ramadi

The Iraqi military announced on Dec. 28 that its forces seized a key government complex in the western city of... 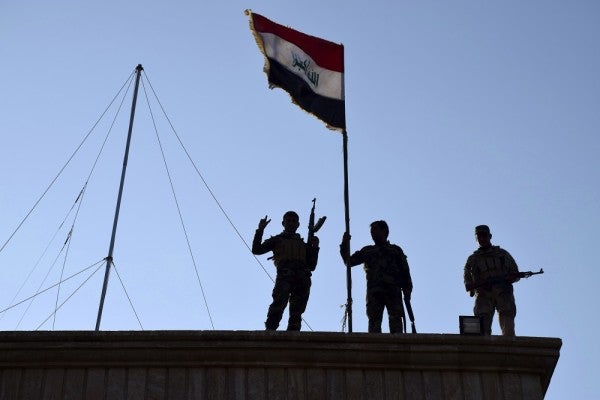 The Iraqi military announced on Dec. 28 that its forces seized a key government complex in the western city of Ramadi, Iraq, following a weeklong battle with Islamic State forces. The seizure of the government complex was both a tactical and symbolic victory for Iraqi forces.

According to The New York Times, the capture of the city center places the Iraqi army within reach of a victory in Ramadi and could mean the end of the Islamic State’s seven-month occupation of the capital city of Anbar province.

“The security forces have entered the governmental buildings and raised the Iraqi flags over them after killing many ISIS militants, and the rest have escaped,” said Brig. Gen. Yahya Rasool in an article by The New York Times.

There have been reports that pockets of resistance remain in as much as 30% of the city and supporters of the Islamic State took to Twitter to dismiss claims that Ramadi was about to fall.

“It's been a great operational day,” said U.S. Army Col. Steve Warren, a spokesman for the American-led coalition against the Islamic State, according to a news report by USA Today. “We're hitting them with combination punches now. They're getting hit in multiple places simultaneously. That said, the war's not over. There's plenty of fighting left to be done. But we're seeing good signs.”

The remaining fighters fled the compound around midday on Dec. 27 after being encircled by Iraqi counterterrorism forces, police and Sunni tribesmen, and supported by American airstrikes.

“What this shows is that the Iraqis have moved from an army that folded on initial contact in the summer of '14 to an army that has been able to conduct a complex operation in a large, built-up area,” said Warren. “This is the biggest thing the Iraqi army has done. Period.”

Currently, security forces are attempting to remove the improvised explosive devices that Islamic State fighters left in their wake, reports The New York Times, and there are concerns that suicide bombers and snipers might still remain in the area.