Iraqi prime minister Haider al-Abadi is demanding a full investigation into the events surrounding the 2003 United States-led invasion of... 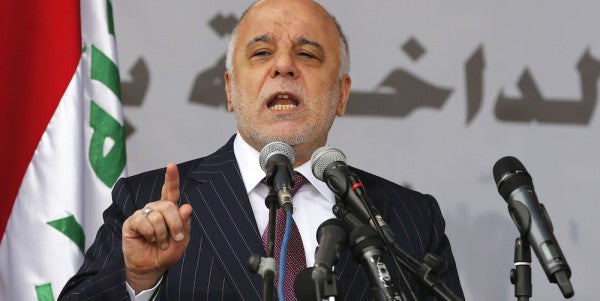 On Jan. 17, al-Abadi told reporters that he wants a “thorough investigation” of the decision-making process by which American military forces went from “liberating” the country from Saddam Hussein’s regime to “occupying” it.

Al-Abadi said the invasion “led to chaos” that continues today, adding that the subsequent occupation created a space for “all terrorist groups from all over the world to enter” the country.

The Iraqi leader’s remarks come at a time when Iraq’s military has been fighting for more than three months to oust the Islamic State in Iraq and Syria from the country’s second largest city, Mosul, which the militants have held since 2014.

Having just declared the eastern part of the city free of ISIS fighters, Iraq’s military is gearing up for an even bloodier fight to the west, where the high density of civilians make collateral damage likely, Fox News reports.

U.S. military forces have deployed to support the Iraqi military in Mosul with special operations forces, Apache helicopters, air controllers, and others assigned to advise and assist roles.

It’s unclear how al-Abadi’s remarks will be greeted by President-elect Donald Trump's incoming administration, especially in light of the al-Abadi’s hope that the United States will provide compensation “for the tragedies and catastrophes [Iraqis] endured” following the 2003 invasion.