Who Burned Iraqi Bodies And Why?

On Jan. 15, 2014, TMZ published eight photographs of Marines burning the bodies of purported Iraqi insurgents. Without unveiling its... 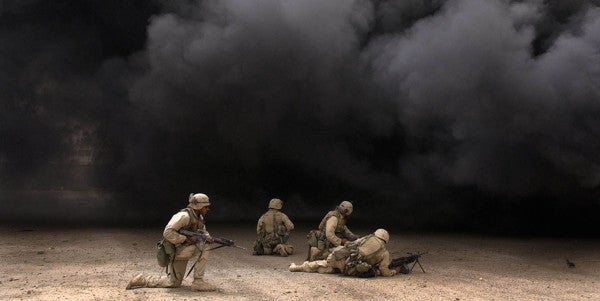 On Jan. 15, 2014, TMZ published eight photographs of Marines burning the bodies of purported Iraqi insurgents. Without unveiling its source, TMZ stated the photographs were taken in Fallujah, Iraq, in 2004. TMZ received a total of 41 photographs of the incident, but did not publish all of them, stating, “Many are just too gruesome.” The photographs were all turned over to investigators at the Department of Defense prior to publication.

Pentagon spokesman Col. Steven Warren told TMZ that the photos appear to show U.S. service members in violation of the Uniform Code of Military Justice. Warren further stated, “The actions that are depicted in these photos are not in any way representative of the honorable, professional service of the 2 1/2 million service members who went to war in Iraq and Afghanistan in the last decade.”

One of the eight photos released by TMZ in 2014.

In response to a Freedom of Information Act request that I submitted, Headquarters Marine Corps produced 18 pages of internal emails related to the photographs. Most of these emails are generic responses to reporter inquiries; however, two email chains, whose senders have been redacted, offer some insight into the context of the photos.

In one of the emails — sent from a redacted source to Capt. Eric D. Flanagan, a spokesman for Headquarters Marine Corps, on Jan. 15 after the TMZ story went live — the sender claims to remember the corpses in the photographs. According to the email, the bodies had been lying for days in the 135-degree heat and were rapidly decomposing as well as being consumed by wild dogs. The decision to burn the bodies was a practical one, because they “were heavily engaged that all our forces were unable to bury the bodies properly and burning them was the only viable solution at the time.”

The email for the unknown source further states, “Sounds ridiculous but this was a task force that came down from either at the time,” implying that the Marines in the photographs were provided some guidance before burning the bodies.

A second email chain between Col. Chris W. Hughes, then deputy director of Marine Corps public affairs at the Pentagon, and a redacted source adds some additional context. Hughes reached out to an unknown source on Jan. 16 for information, writing, “Some photos of Marines burning enemy corpses during Op in 2004 is starting to create trouble. A lad says you were there. Any recollections?”

The source responds: “The photos I saw on TMZ do not appear to be from April of 2004. I don’t see what the deal is. Anyone on the lines knows the smell is sickening and lowers morale. Red Crescent in both battles in Fallujah refused to pick up some terrible bodies. What else can you do?” The response gives some credibility to the alleged time frame and justification for burning the bodies.

According to the FOIA response, Marine Corps Forces Central Command completed an investigation into the burning of the bodies, but the report has yet to be released.

The photographs draw comparisons to the controversial case of a video showing Marines urinating on human remains in Afghanistan. During that case, Gen. James Amos, then commandant of the Marine Corps, was accused by defense lawyers for the accused Marines of interfering with the trials. Lt. Gen. Thomas Waldhauser, then commanding general of Marine Corps Forces Central Command, who had been assigned by Amos to handle the urination cases stated under oath that Amos wanted the Marines involved in the urination video “crushed.” Amos told investigators that he could not recall if he used those words in conversation with Waldhauser.

Charges against the Marines were dropped before Amos’ alleged interference with the trials could be litigated in open court.

The emails disclosed in the FOIA response to the photos of the charred corpses indicate that Amos again tasked the commander of Marine Corps Forces Central Command to lead the investigation. This time, that commander was Lt. Gen. Robert Neller, the president’s appointee to be the 37th commandant of the Marine Corps. Because Amos’ civilian legal advisor failed to respond to the FOIA request, it is unclear what legal advice Amos received before he tasked Neller with the investigation.

At this time, there's no clear answer to why Neller took no action against the Marines depicted in the photographs or why the results of the investigation have not been released.

It is essential that the results of this investigation be released by Marine Corps Forces Central Command with minimal redactions. The press release by Pentagon stating that the Marines in the photographs were dishonorable and unprofessional must be evaluated against the investigation by the Marine Corps. If these Marines burned the bodies out of necessity and not to desecrate the bodies, then they deserve to have the record corrected.