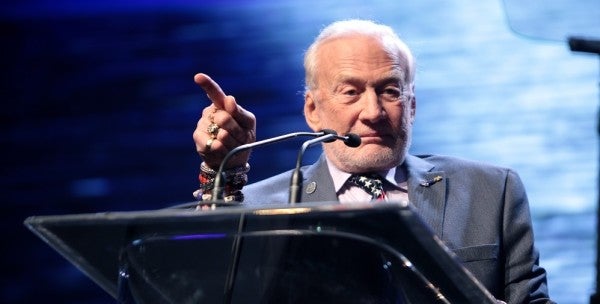 The man taking a fist to the face is Bart Sibrel, a conspiracy theorist who insists that the lunar landings were a hoax drummed up by the United States government to intimidate the Soviet Union during the Cold War. In addition to promoting crackpot theories, Sibrel made the really dumb decision to harass Aldrin, who before he was an astronaut, was a highly decorated Air Force fighter pilot in the Korean War, in 2002 outside of a Los Angeles hotel. In the video, Sibrel asks Aldrin to swear on a Bible that he actually landed on the moon, and after the then-72-year-old former astronaut refuses, Sibrel calls him a “coward” and a “liar.”

The words are barely out of Sibrel's mouth when Aldrin throws a mean right cross. Aldrin even has a little spring in his step, like he's ready to throw another — he's definitely done that before.

No charges were brought against Aldrin after witnesses stated that Sibrel “aggressively” poked Aldrin with the Bible, the BBC reported on Sept. 21, 2002.