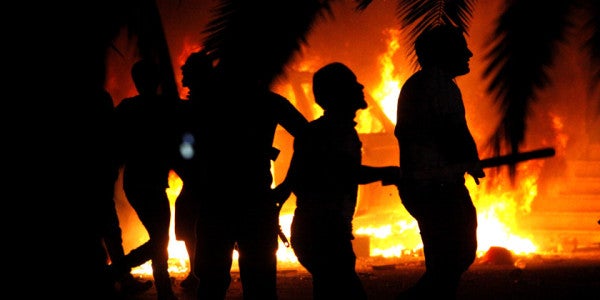 A new congressional report on the Sept. 11, 2012, terrorist attack on a U.S. consulate in Benghazi, Libya, that left four Americans dead found that the Marines tasked with responding to the attack had to change in and out of uniform four times, slowing their arrival at the scene of the attack.

The 800-page report, released Tuesday by the House Select Committee on Benghazi, is the last in a series of Republican-authored probes into the attack and the response of administration officials. It provides nearly two dozen more details about the chain of events taken from the testimony of key leaders, detailing what are described as communication and intelligence failures and leadership gaps.

Among these were delays imposed on the 50-man Marine Fleet Antiterrorism Security Team, or FAST, which launched from Rota, Spain, more than 2,000 miles away from Benghazi. The team was loaded onto C-130 aircraft, but held on the ground for three hours before being allowed to take off.

According to the report, Navy Vice Adm. Kurt Tidd, then-director of operations for the Joint Chiefs of Staff, testified that the State Department had dithered about how to send forces into Libya without creating a larger international incident.

“State was very, very concerned about what the footprint would look like in Tripoli,” Tidd said in testimony cited in the report. “They didn't want it to look like we were invading. That was the gist or that was the genesis of the discussion that occurred over whether or not when the FAST arrives at the airport in Tripoli — because they wanted to reinforce security at the embassy — but there was concern that it not have this image of a big, invading force.”

The team was going to be transported in vehicles to the U.S. Embassy in Tripoli, Tidd said.

“And there was just concern of parading a bunch of trucks or buses full of Marines in uniform, what kind of image that would present, recognizing it was going to be daylight when they arrived,” he said.

The Marine commander of the FAST platoon, unnamed in the report, testified that the Marines' orders changed constantly as they waited to depart.

“We were told multiple times to change what we were wearing, to change from cammies into civilian attire, civilian attire into cammies, cammies into civilian attire,” he said. “There was also some talk of whether or not we could carry our personal weapons. I was basically holding hard and fast to the point where we were carrying our personal weapons. Like, we've got a very violent thing going on the ground where we're going, so we're going to be carrying something that can protect ourselves.”

Ultimately, the commander said, the Marines would change in and out of uniform four times.

The report's authors concluded that these hours of indecision contradicted official statements that the administration had responded with all haste in response to the attacks.

“Although Dempsey told the U.S. Senate that once forces began moving, 'nothing stopped us, nothing slowed us,' it appears the U.S. Military's response that night was delayed — because it started too late,” they wrote.

In his 2014 memoir, “Worthy Fights,” Leon Panetta, the former CIA director and later defense secretary, defended the administration's response to the Benghazi attack.

“Any suggestion that anyone, from the president on down, delayed or was indifferent to the ambassador and his staff in Benghazi is simply false,” he wrote. “One conspiracy theory held that the CIA security team in Tripoli had been ordered by their chain of command to 'stand down.' That was not only false but directly the opposite of the sum of everyone's efforts in response to the president's orders, which was to move as quickly as possible to help.”

The House report also concluded the uniform issue spoke to a lack of clear leadership.

“The issue of military attire versus civilian clothes illustrated no one seemed to be taking charge and making final decisions,” the authors wrote.

It remains unclear whether the three-hour delay made a difference in the fast-moving events of that night in Libya. Ultimately, the FAST Marines were never ordered to Benghazi.