A quick and easy blood donation can help pave the way to better healthcare for veterans — and also provide... 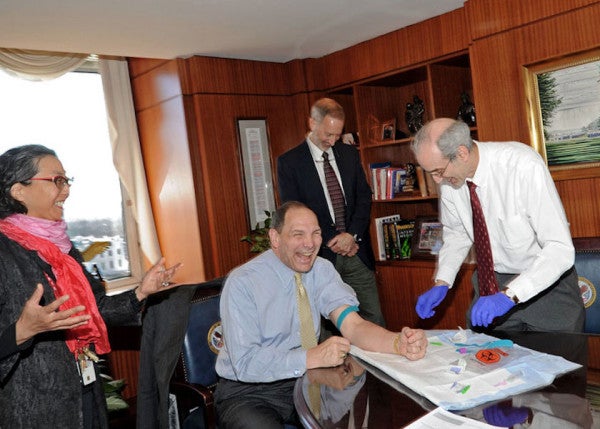 A quick and easy blood donation can help pave the way to better healthcare for veterans — and also provide answers to complex medical questions — through a new gene study program conducted by the Department of Veterans Affairs.

The Million Veteran Program, which launched in 2011, is a national, voluntary research study by the Department of Veterans Affairs to research what kinds of roles genes play in overall health. The program is a part of the White House Precision Medicine Initiative, and aims to help the VA better understand diseases (such as cancer and diabetes) that impact those who have served. According to Dr. John Concato, one of two principal investigators for the MVP, the project may be able to expedite the science of customizing disease prevention and treatment to individual patients and illnesses.

“Conducting research to improve health care is not new to VA. For example, the first antibiotic treatment for tuberculosis was developed and tested by VA in the late 1940s,” Concato wrote in a VA blog post. “That program has since completed more than 175 studies evaluating risk factors or treatments for heart disease, cancer, mental health, and many other disorders.”

This past January during his State of the Union address, President Barack Obama called for $215 million for the program, including $70 million for cancer research alone. He also discussed the background of the program during the White House Summit on Genetic Medicine in February.

“The VA has been gathering genomic data on a large number of men and women who have served their country, in order to serve them better in the VA system,” Obama said. “But this can be connected with researchers in a university setting who are focused on a specific disease, and they can use this big data to accelerate the research.”

To date, nearly 500,000 veterans and service members have contributed to the program, including the secretary of Veterans Affairs, Robert McDonald. “It’s time we got beyond reacting to disease when it happens — we need to prevent the disease before it occurs,” the secretary said at the Veterans of Foreign Wars 2016 national convention earlier this week.

There are nearly 60 sites across the country that are currently accepting enrollments in the Million Veteran Program — and study visits take approximately 20 minutes to complete. Enrollees need only provide a blood sample for genomic analyses, complete a questionnaire, and consent to have their medical records reviewed to participate.

Confidentiality and identity protection are of paramount importance to the program — donor identities are kept secure from researchers and samples are labeled with codes instead of names and other identifying information.