Off the shelf, above the fight: How cheap drones are completely changing warfare

Ukraine is showing a paradigm shift. Units no longer need to rely on large platforms and layers of command and control that delay the use of drones on the battlefield. 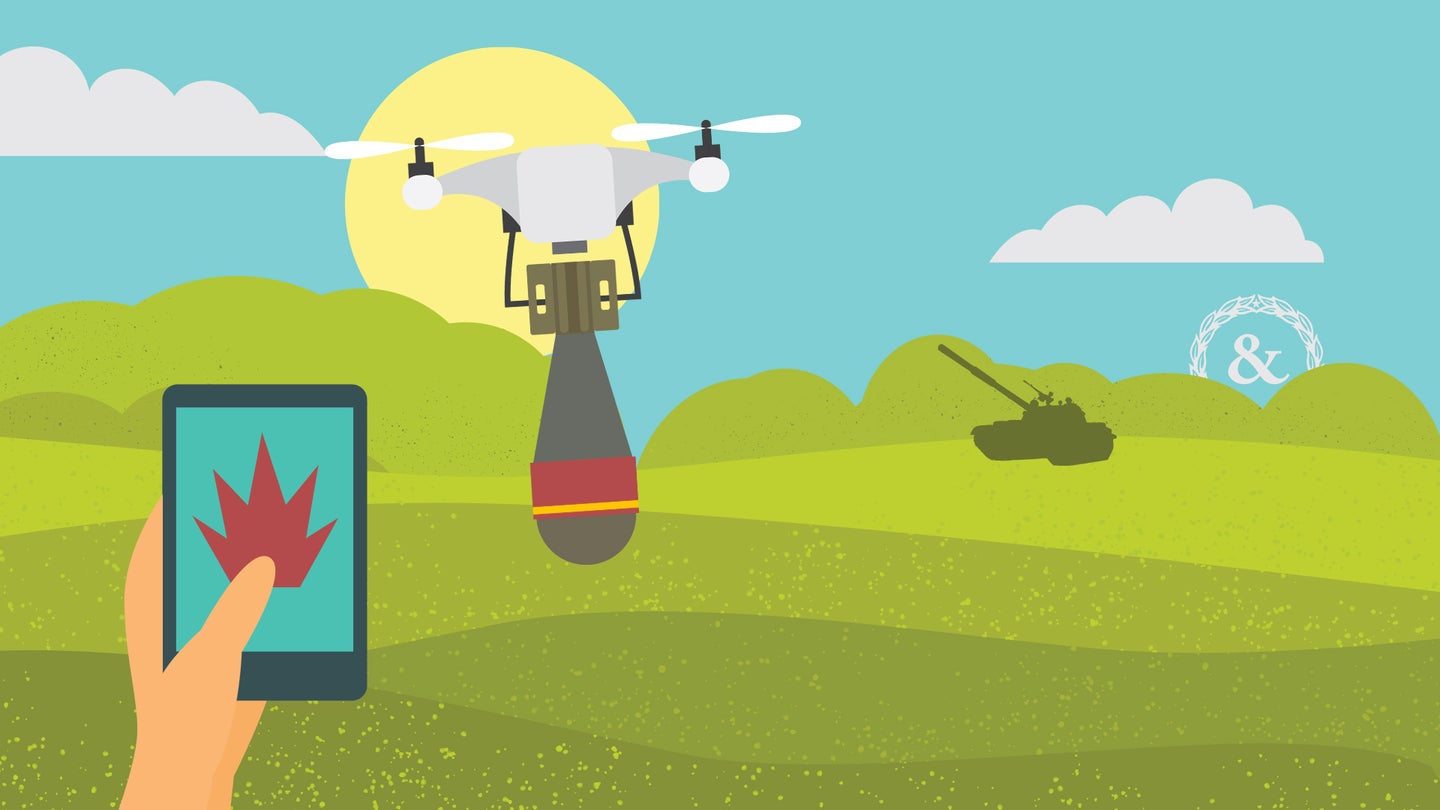 Russia invaded Ukraine on Feb. 24, 2022. In the intervening 100-plus days, the world witnessed a small country’s strength and resolve against a much larger aggressor and, in many areas, beat back the Russian juggernaut.

The war is now largely focused on Ukraine’s East. It is a conflict characterized by strong conventional actions and asymmetric use of extant technologies that benefit the defender with innovative solutions. One of these areas is the use of commercial and other locally and internationally procured drones, or Unmanned Aerial Systems (UAS), in support of Ukrainian forces’ attack and maneuver.

In this article, I examine my own history and usage of the (large) amount of Intelligence, Surveillance, and Reconnaissance (ISR) support I levied while serving in U.S. Special Operations Command juxtaposed against what Ukraine is using against Russian forces.

Spanning a 24-year career, as a ground-force commander and later operations officer working for a variety of units within SOCOM, I had access to multi-layered ISR support from a variety of platforms equipped with the most sophisticated visual and targeting sensors in the United States inventory. In real-time, I could receive and monitor intelligence and react to enemy movements ahead of their deployments against me or the forces I managed.

While I cannot disclose the number and types of platforms I used tied to specific capabilities, I am able to say I had a menu of sorts from which to build a collection and engagement plan in support of missions that were complimentary and specifically aligned to a requirement. This provided a great deal of flexibility for planning and execution, particularly since I could rely upon uninterrupted, 24-hour coverage — known as a ‘soak’ — of a target area which included intelligence collection and close air support in the same platform.  This is something that the 90-minutes of on-station time a fighter aircraft like the AV8-B Harrier simply cannot provide.

The operators of these ISR platforms often engaged enemy forces at danger-close ranges. It was an unprecedented availability to a maneuver unit honed to a razor’s edge after 20 years of worldwide combat operations in support of the Global War on Terror (GWOT).

For mission planning, a limited number of platforms and long transit distances that reduced overhead station time were other factors making apportionment and allocation a careful consideration by theater air planners depending on the importance and precedence placed on the mission itself. A mission could be scrapped or delayed without the proper type and layering of ISR assets in support of ground forces.

The tactics, techniques, and procedures perfected as a result of this support are such that it changed how the U.S. military doctrinally trained commanders to use these platforms to best effect. U.S. SOF has become so reliant on ISR that it is often briefed as part of the ground maneuver plan and deviations from it or operating without adequate coverage is viewed in the context of the U.S. Army Special Forces team at Tongo Tongo, Niger in 2017 who suffered deadly consequences without it — aside from other mission planning concerns and issues found with the chain of command.

U.S. military commanders have found that ISR is a minimum force requirement for mission execution since, if something does go wrong, or is equally successful, observers from thousands of miles away can and do evaluate and dissect every move. A more public and strategic level example of this is illustrated in the photo of the primary White House and National Security Council staff watching Operation Neptune Spear, the May 2011 raid against Osama Bin Laden in real-time.

Dating back to Russian incursions into Ukraine in 2014, the use of UAS by respective forces has only increased. What Ukraine is demonstrating is the ability to adjust to the ground situation and make the most of distributed forces as they continue harassing Russian units. Russia has its own UAS capabilities, but as of yet is not gaining the upper hand in the drone war over Ukraine.

Ukraine has its own line of locally manufactured platforms, some of which can carry up to four precision munitions. These include the PD-1 and PD-2 and the Bayraktar TB2 drone. With these platforms, there are specific, well-trained forces dedicated to their employment and support to maneuver units.

At the tactical level, U.S. forces use drones such as the Switchblade and Scan Eagle systems. Some variants of these platforms have been supplied to Ukraine by the U.S. and their capabilities enhance battlefield awareness and coordination for commanders,  as well as offensive capabilities, but these are not the only assets being employed.  Further UAS support also comes from countries like Poland.

This multi-faceted approach to UAS allows for flexibility that circumvents ponderous approval chains and pushes support to the lowest level. All of them are proving effective in countering Russian forces.

The Ukraine war is one of adaptation and expediency. Ground units can obtain any manner of commercially available, off-the-shelf (COTS) UAS platforms to support their maneuver without having to coordinate nor compete for their use. But there are drawbacks, the biggest being adjacent unit coordination and target identification when using these systems since Ukrainian and Russian forces are outfitted with similar main battle tanks, armored personnel carriers, and other equipment.

Perhaps the most innovative use of assets is found in Ukraine’s adaptation of COTS drones to make them weaponized. An example of this is starkly illustrated in this video of Russian troops being engaged by a UAS that is crudely armed with grenades or small bombs. Precision weaponeering is not required in this type of warfare and no one is coming to take the Ukrainian military to task for not having exact coordinates and adjustments to their fires plans as they wage war with Russian forces.

These drones can be procured quickly (even through the mail in some cases), do not require a great deal of training to use, and operators can gain a great deal of proficiency after only a few weeks of practice. These drones seem tailor-made for the “gamer” generation. So long as they don’t lose signal and are fully charged, they can remain overhead, even overlapping with other, more sophisticated platforms integrated into a crude station-time and collection plan so that there are no gaps in coverage. It is a paradigm shift. Units are no longer reliant on large platforms and layers of command and control that delay their use on the battlefield.

Ukraine is also dominating a typically unacknowledged area known as the SUAS (Small Unmanned Aerial System) space, specifically, 1,000 feet above ground level (AGL) and below. The U.S. ISR inventory is heavily populated with large Group 4s and Group 3 platforms, but Ukraine has taken another step by having 18-year-olds, who are “Call of Duty experts,” 3D print SUAS in their garage, and then strap hand grenades or other rudimentary explosive devices to the landing gear rigged with a zip tie. I don’t know if anyone in the history of warfare has ever truly exploited this area very well, but the Ukrainian military is adopting it.

Being able to locate and destroy the enemy through self-supporting aerial reconnaissance assets shortens the kill chain, as witnessed in this footage of a Russian artillery unit that assumed away its own security in broken vegetation. Metadata sent from still photo captures can be translated into actionable targeting. While rudimentary in its collection, the outcome is undeniable. A true cautionary tale of “if you can be seen, you can be killed.”

The next step is making all of these platforms interconnect so that they are multispectral, fast, quiet, and talk to each other. These would be a helicopter pilot’s nightmare due to the altitudes at which they fly and their speed and agility in the hands of a capable operator.

What are the lessons learned?

U.S. forces, among others observing the war in Ukraine can take away several key points from the conflict to date pertaining to UAS in the battlespace.

The lessons learned I have provided are garnered from years of service using these platforms, and close monitoring of the Ukraine war since the beginning. Never underestimate your enemy; don’t assume away a risk, and always provide for your own force protection.

Ukraine’s efforts against a larger and more equipped foe are enhanced through their constant adaptation on a modern battlefield. Certainly, they enjoy outside support in the form of weapons and technology, but the application of these assets is theirs alone.

Though Ukrainian military forces do not have access to the same numbers and types of ISR platforms available to U.S. military units, they are effective in utilizing their own UAS and SUAS, integrating COTS systems at the tactical level with impressive results.

Ukraine’s aerial reconnaissance allows for concentrated fires to inflict casualties. With the support of UAS, Ukraine’s forces have stymied the Russian advance. Russia’s high casualty rates attrit the one item that once eroded is most difficult to regain: Morale. In the former, Russian UAS is not bettering their opponent. In the latter, Russia has its work cut out for them.

Foreign military observers, including U.S. forces, should pay close attention to how UAS supports and enhance Ukraine’s efforts and learn lessons through observation versus painful experience. In the land of the blind, the one-eyed man is king.