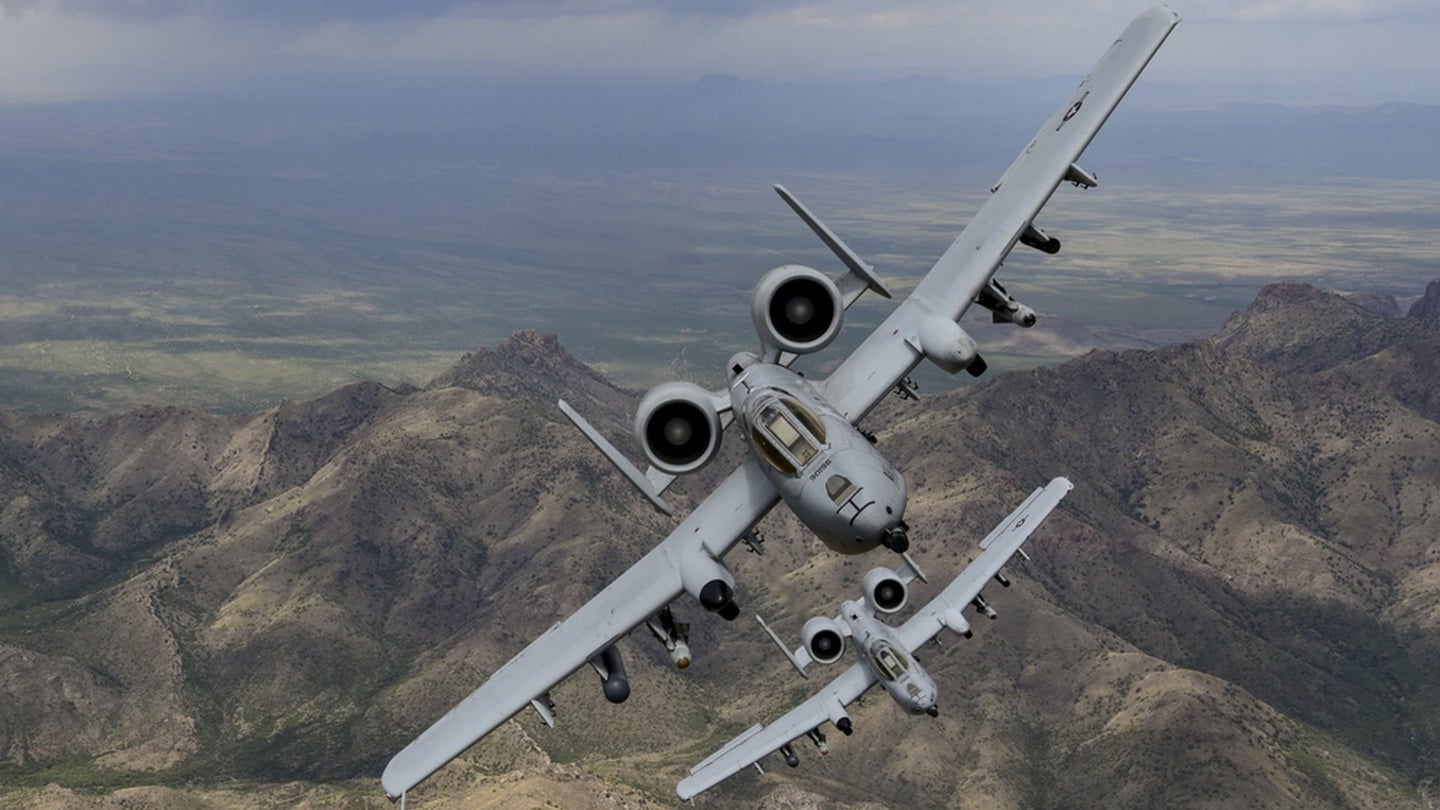 Two A-10C Thunderbolt IIs fly in formation over southern Arizona, April 29, 2019. The A-10 is built around the GAU-8 Avenger 30MM Gatling gun and is capable of carrying an additional 16,000 pounds of munitions under the wings and belly of the aircraft. (U.S. Air Force photo by Staff Sgt. Betty R. Chevalier).
SHARE

Our military-industrial complex recently convinced an aviation expert at The Aviationist to take a swing at the A-10 once again. Instead of relying on that author’s poorly researched piece, let’s take a more thorough look into battlefield realities.

As the Russians are learning now, war is costly and unpredictable. This is why all diplomatic, informational, and economic means should be exhausted before resorting to military force. They are also discovering that how people fight is one of the most important ingredients to winning in warfare. The more complex the systems that a Goliath combatant uses, the simpler David’s defenses to those systems often become.

Not all weapons are equally important in war. Their importance is unrelated to their cost. Simple tools are undeniably more important in combat than more expensive weapons. Camouflage, concealment, deception, and dispersal still matter. Whether hiding combat jets, trucks or armor, these basics always apply. Hiding air bases from hypersonic weapons is impossible, therefore maintaining the Air Force’s austere field capability with either the A-10 or a future replacement attack aircraft shouldn’t be underestimated.

Numbers also matter. The numbers of aircraft, the weapons they carry, sortie counts, and decoys (and yes, A-10s can carry the Miniature Air-Launched Decoy) are important arrows in a combatant commander’s quiver when fighting a grinding war of attrition.

Survivability certainly matters. Recent combat jet losses show that fire and loss of control are still the leading killers of jet aircraft. When Air Force Lt. Col. Robert F. C. Winger and Maj. Tom Pulham helped write the A-X requirements document in the late 1960s, a great deal of effort was put into researching Vietnam War aircraft losses. Many of the design lessons these men had witnessed from their Vietnam A-1 combat experiences ultimately found their way into the A-X design requirements document. Fire and loss of control proved to be major culprits in combat aircraft losses. Self-sealing fuel tanks, multiple means of flight control and pod-mounted engines are integral to the A-10’s survivability. But the newest addition to the Air Force’s fleet demonstrates that our leaders have seemingly forgotten many of these hard-learned lessons.

Sortie rates will always matter. If your entire fleet is made up of fast jets with very limited weapons carriage and no under-the-weather capability, then it’s going to take a long time to positively ID and attrit an enemy formation. It will take significantly less time for the A-10C to do the same as reported in Col. Rasmussen’s A-10 in Central Europe white paper: “In February 1977, two A-10s flew 34 sorties (17 each) during an 11-hour period; these were 120nm missions dropping four 500-pound bombs and making two 30mm strafe passes on each sortie.”

“The weather confronting the A-10 in Central Europe is so basic to the mission problem that it deserves to be classified as part of the threat…More specifically, weather conditions of better than 2000’ ceilings and two-mile visibility exist for 73 percent of the time on an annual basis and 53 percent during the winter months. — Thus, the weather in Central Europe becomes a primary factor in the formula for solving the close air support problem.”

Poor weather factors into every tactical challenge on the battlefield, from positively identifying targets below the weather, to trying to logistically support dispersed combat airfields that don’t have Instrument Landing System capability. And guess what? Adversaries will undoubtedly use poor weather against us for offensives. So future combatant commanders better have a way to quickly identify and engage enemy targets.

The future of attack aviation

If you had to build a “new” hammer, what would it look like? Just as the design of the hammer hasn’t changed in 10,000 years, the A-10 replacement, surely lighter and more powerful, would still look a lot like the hammer it’s replacing. As Col. Rasmussen pointed out:

“…not all the revolutionary impacts were due to the advances in technology. When Swiss foot soldiers defeated feudal armies of mounted armored knights in the fourteenth century, simply by unseating them with long sticks, the achievement was hardly attributable to technology. It resulted from the optimal employment of a simple, but potentially decisive weapon. Until that battle in 1339, the pike had not been employed to its full potential.”

A note to Generals Brown, Kelly and Secretary Kendall

As you train, organize and equip your people for future conflicts, please be careful to not “upgrade” into an Air Force that might succeed in the first week of the war, but fail miserably the following 107 days. Taking out an adversary’s air defense network, while unable to effectively hit masses of enemy armor before they smash into friendly assets, will lead to strategic failure. The reason the A-10 exists is that former Air Force Chief of Staff General John McConnell understood that if the Air Force wanted to keep its share of the air-to-ground budget, then it had better procure a legitimate attack platform. Congressional leaders know this and haven’t forgotten their role in keeping American citizens safe.

Until a suitable, survivable, robust, and austere capable A-10 replacement is fielded, congressional leaders should continue to mandate that the U.S Air Force retain the remarkably adaptable A-10 Warthog.

Brian Boeding is not a journalist. He is a retired Lt. Col., former A-10 Instructor and Sandy 1 with 862 combat hours across the spectrum of Major Combat Ops to Counter-Insurgency. He has been teaching pilots to exercise good judgment in all sorts of aircraft for more than 30 years. Brian was the mastermind behind the largest airstrike in recent history, is a part-time farmer, a voracious reader, and has been counseled by a great Weapons Officer for being overly aggressive.