10 Leadership Lessons from One Of Britain’s Greatest Soldiers

Field Marshal William Slim, who commanded a British field army in Burma during the Second World War, may not be... 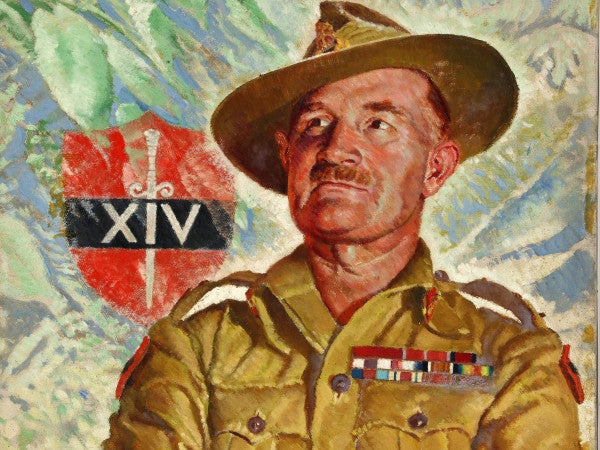 Field Marshal William Slim, who commanded a British field army in Burma during the Second World War, may not be one of Britain’s most famous warriors, but he was arguably one of its most effective. Slim turned a badly mauled British army into a formidable fighting machine, and routed a much larger Japanese army, marching victoriously into the port of Rangoon in 1945. Even more impressive is that Slim’s army operated on a shoestring budget; Burma was the least of Britain’s concerns during the war.

Slim’s war memoir, “Defeat Into Victory,” has become a staple in military reading lists. It stands in marked contrast to many of today’s war memoirs, often written by disgraced officials, hell-bent on settling old scores. In contrast, Slim has nary a harsh word for anyone, despite being saddled with intractable subordinates like “Vinegar Joe” Stilwell and Orde Wingate. Slim’s memoir is, in my opinion, one of the greatest books on military leadership ever written.

Related: What history can teach us about leadership — good, bad, and ugly »

Here are 10 lessons you’ll learn from Slim’s memoirs, should you have the opportunity to read it:

1. Ruthlessly enforce standards. As if Slim didn’t have enough problems with the Japanese, he faced an even deadlier enemy: malaria. For every soldier evacuated for combat wounds, over 120 evacuated for various diseases. A battalion of 1,000 men might lose 12 soldiers to sickness each day. At that rate, an army could be decimated in a matter of weeks.

Though malaria treatment was still in its infancy, the British were still able to curb the disease through basic Army discipline. Slim banned shorts, and mandated that sleeves be rolled down after sunset to protect against mosquito bites.

Slim also rigorously enforced the regular use of mepracine, an early anti-malaria drug. Slim regularly inspected small units — if less than 95% of soldiers were taking their daily doses, he sacked the commander. After three such incidents, the rest of the British army got the message. By the end of the war, the British Army had reduced malaria within its ranks tenfold.

2. Beware of the Bad Idea Fairy. Spend a day inside the D.C. Beltway, and you’ll find yourself accosted by hucksters peddling silver-bullet snake oil for today’s national security problems. 1942 was little different. Slim could hardly turn a corner without being pestered by a junior staff officer with some harebrained scheme to win the war. Slim described these quacks as:

… persuasive young men interested in selling short cuts to victory…these ‘racketeers’, as I called them, were of two kinds, those whose acquaintance with war was confined to large non-fighting staffs where they had time to develop their theories, and tough, cheerful fellows who might be first-class landed on a beach at night to scupper a sentry-post, but whose experience was about the range of a tommy-gun…few of them had anything really new to say.

Though, in fairness, the only thing worse than a foolhardy new idea is a crack-pot old idea, disguised as something new.

3. Nothing happens without logistics. And logistics doesn’t happen without logisticians. For every rifleman on a remote combat outpost, there are probably a dozen logisticians, administrators, and cooks. Most troops in the field have a litany of pejorative terms for these soldiers — REMFs, FOBbits, and POGs. But derision aside, the modern rifleman wouldn’t last long without food, fuel, batteries, and medical care.

Slim knew that there are scores of unsung heroes in any large organization — the ones you never think about until they eventually fail in their jobs. Think of how quickly your workplace would break down without email, or how a modern army would grind to a halt without fuel and maintenance.

As Slim spoke to his soldiers, he likened an army to a clock, with each gear representing a soldier. Some gears may be larger than others, sure. But without every gear, a clock simply will not turn.

Indeed, throughout the war, Slim expressed nothing but admiration for the men who toiled behind the scenes to keep the British war machine functioning.

4. Every soldier is a rifleman. Respect must be earned, and Slim’s admiration for support troops came with a price.

During the retreat of 1942, Slim learned a grim lesson: In war, there are no non-combatants. Clerks and cooks in British army headquarters often found themselves fighting the Japanese tooth-and-nail to prevent their command posts from being overrun.

5. Planning is everything. And nothing. Successful military planners live up to Sun-Tzu’s maxim, “All battles are won before they are fought.” In late 1942, Slim was eager for a decisive victory over the Japanese Army, on his terms. After meticulous planning, he devised a plan to lure a Japanese field army into a trap on the Shwebo plain, where the British would enjoy superior defensive terrain, and a two-to-one numerical advantage. As the old cliché goes, all’s fair in war.

Of course, there’s another cliché: The enemy gets a vote.

The Japanese didn’t nibble at Slim’s bait. Slim later wrote, “It looked as if this battle, like so many of mine, was not going to start quite as I intended. It was time for me to use a little of that flexibility of mind that I had so often urged on my subordinates.”

6. Give up your best people for the good of the institution. Just as Slim was preparing for the final, and riskiest, phase of the Burma campaign, his Chief of Staff Steve Irwin was promoted to major general, and assigned as the commandant of the Staff College in Quetta (modern-day Pakistan).

Slim was crushed; Irwin had served as Slim’s right-hand man for nearly two years, during which he praised Irwin’s “loyalty, brilliance, and imperturbable common sense.”

Secretly, Slim was upset by Irwin’s loss, though the sentiment quickly passed. Slim received a new chief of staff, just as talented as his old one. Moreover, Major General Irwin was a perfect fit for the Staff College, where he produced brilliant staff officers. “No man could have served his country better,” Slim said of Irwin’s tenure.

7. Establish a “battle rhythm.” A one-year deployment is a long time, and over the course of the past 13 years, many veterans have done multiple deployments. Slim spent a continuous three-and-a-half years battling the Japanese in Burma, with some of his troops stuck in Southeast Asia even longer.

Life’s a marathon, not a sprint. Slim was hardly a slouch; his daily routine included plenty of time for the administrative business of running a field army. But he also allowed time for exercise, reading, and a decent night’s sleep. It’s a far cry from Napoleon, who was rumored to have worked 20 hours a day on the march, and even then, still woke several times throughout the night.

The secret? Slim groomed trusted subordinates who could handle anything short of a major crisis while he slept. Napoleon, on the other hand, constantly micromanaged his generals.

8. Commanders are cat wranglers. Slim spent much of the war wrestling with stubborn subordinates — among them, “Vinegar Joe” Stilwell and the flamboyant commando leader, Orde Wingate. Neither were particularly happy to accept orders from Slim. Stilwell was perennially prickly, while Wingate claimed he answered only to the British prime minister himself. It was only after painstaking negotiation that Slim could convince, though not exactly order, Stilwell and Wingate into battle.

If you’ve ever been a headquarters company commander, you know how difficult it can be to “wrangle the cats” — managing the senior officers and NCOs, many of whom will inevitably outrank you. Ordering about subordinates is easy when you have court-martial authority over them. Take that away, and you’re forced to lead on persuasion, argument, and the strength of your ideas. As you move up in responsibility, it’ll happen more often than you’d think.

9. Keep it short and sweet. A modern army can dish out a deluge of digital drivel. As a battalion operations officers, I routinely handled 100-page operations-orders. Every week. For mundane garrison nonsense.

As the enigmatic Doctrine Man explains in this “training film,” no one will bother to read a 100-page operation order. They will, however, bother to read a five-page mission order. Anything worth saying is worth saying briefly. In one of the book’s most oft-quoted passages, Slim highlights the importance of the shortest–albeit the most critical–portion of an operations order: the commander’s intent.

[The commander’s intent] is the one overriding expression of will by which everything in the order and every action by every commander and soldier in the army must be dominated. It should, therefore, be worded by the commander himself.

10. “Imitations are rarely masterpieces.” Finally, don’t take these 10 tips too seriously. Slim was well aware that, above all, commanders had to be authentic. Don’t try to be a Napoleon, or even a Slim. Just be yourself.