At a memorial service at the Pentagon on Thursday, President Barack Obama said, “America endures in the courage of the... 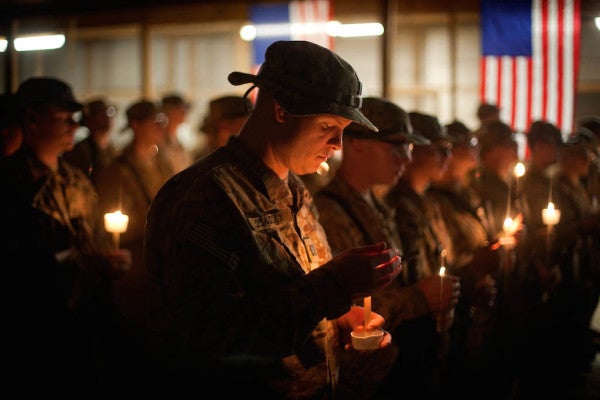 At a memorial service at the Pentagon on Thursday, President Barack Obama said, “America endures in the courage of the men and women who serve under our flag. Over more than a decade of war, this 9/11 generation has answered our country’s call, and three months from now, our combat mission in Afghanistan will come to an end.”

When I was 19, my ignorance on matters in the Middle East and Central Asia were near total. The last time I remembered even hearing the word Afghanistan was while watching “Rambo 3.” I rarely watched the news, ensconced as I was in the middle-class cocoon of suburban Austin, Texas.

To me, war was Desert Storm, air campaigns in the Balkans, and the occasional clusterfuck like Mogadishu. All came to their own conclusions, from the 100-hour victory in Kuwait to a peacekeeping mission in Kosovo that most people quickly forgot.

After 9/11, I figured that we would have no problems handling a backwater country like Afghanistan. The swift collapse of the Taliban seemed to confirm that notion. At first.

When the Iraq War came, it seemed it would be Desert Storm all over again. My brother was a platoon commander taking part in the invasion, but I didn’t worry that much. Iraq was a known quantity that we could stomp at our leisure. The fall of Baghdad and Saddam’s statue seemed to confirm that. At first.

By 2005, it was clear that all my assumptions, like those of so many others, could not be more wrong. I remember seeing news reports of a car bombing that killed over a 100 civilians in Iraq. The next day, their funeral processions were bombed as well. Iraq was becoming a slaughterhouse, and in Afghanistan, the Taliban were slowly regaining their foothold.

By the time I enlisted in the Army in May 2005, it was with the expectation I would be joining a war effort that was becoming more condemned and despised by the day. The consensus among most of the punditry and population seemed to be Iraq was a lost cause. But that was the only reason I joined. The thought of a peacetime Army career had held no appeal to me, and if Iraq hadn’t spiraled out of control, I probably never would have served.

In retrospect, the thought that I never even considered being deployed to Afghanistan is fairly ludicrous, but naturally enough, I ended up there, the “forgotten war.” When I went home on leave, people seemed actually surprised that I was there instead of Iraq. “Is that still going on?”

Dozens of firefights, rocket attacks, and car bombs confirmed, that yes, it was indeed still going on. The bloodshed in Iraq might have been orders of magnitude worse, but on the Pakistan border, the long, slow burn continued as small groups of Americans attempted to control a region by nature uncontrollable.

Before my first 16-month tour was over, I knew I would be stop-lossed to do a second one. I didn’t mind that much, it could hardly be considered a surprise. We were retaining soldiers who would have been summarily booted if we hadn’t needed the manpower so badly.

We were tasked to go to Iraq in 2009, where things finally seemed to be quieting down, but Obama’s surge to Afghanistan brought us back to a country we as a platoon universally despised. Over that year, my company lost 10 men, with many more wounded. Some of those men were my close friends. The forgotten war regained its place in the headlines, spurred by an increase in lives lost in a country most Americans still couldn’t find on a map.

Now, on the 13th anniversary of a barbaric act that shattered the assumptions of everyone in the country, I see Iraq, with the carnage in Syria in the background, once again gaining our full attention. Obama’s speech today is the first time I’ve heard Afghanistan mentioned on air in at least a week. We are diving back into what is looking like a new 30 Years War in the Middle East, while in Afghanistan, disputed elections and Taliban resurgence keep that long, slow burn going.

American troops are leaving Afghanistan, after billions of dollars spent and thousands of lives lost. What will happen afterward is uncertain to say the least. But I really have to wonder how many back home will even notice when it does happen. I wonder if that long peace from my childhood will ever come back. It’s the Islamic State’s time in the sun, in a war with no boundaries and no end in sight, and an American public ready to step back into the maelstrom.

It looks like waiting for that peace is going to be a lot longer than I thought back in 2001, as if 13 years hasn’t been long enough.