5 Battlefield Innovations That Came From The Rank-And-File Troops

Military personnel are a crafty bunch. They surprise their commanders and buddies with many good — and, let’s be honest,... 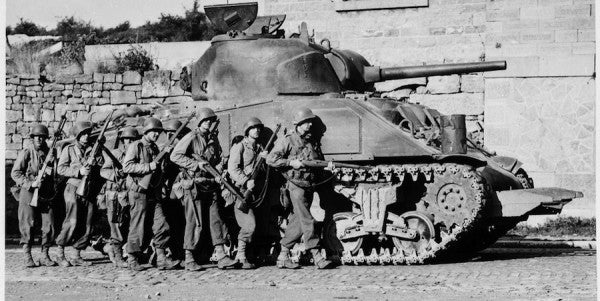 Military personnel are a crafty bunch. They surprise their commanders and buddies with many good — and, let’s be honest, some bad — innovations. Some of these battlefield creations even surprise the teams of scientists and industry professionals designing military equipment. When faced with limited resources, the battlefield innovations of the rank-and-file troops have become a staple of military kits. Weapon systems and generals don’t win wars alone; it is the dog-tired foot soldier who eventually helps the victor cross the finish line.

Many of these innovations were strictly for improved comfort, like the battlefield home brewor the stills created by pioneering troops confined to trenches in World War I. Defeating scurvy with booze and citrus fruit was a major battlefield improvement as Crispin Burke wrote last year. The woobie, or poncho liner, is another example of relatively low-tech equipment being used to improve battlefield effectiveness.

Here are some inventions from the every-day soldiers and uniform-wearing MacGyvers who used all available resources to implement crafty solutions.

A Sherman 'Rhino' variant, modified to cut through the hedgerows of the bocage countryside, Normandy 1944.

The hedgerows of Normandy and northern France during the beachhead breakout in the summer of 1944 were natural barriers providing cover and concealment to Nazi forces defending the area. Utilizing the hedgerows, German teams of infantry and armor wreaked havoc on Allied forces attempting to break out of the precarious beachhead. A New Jersey National Guard tanker, Sgt. Curtis Grubb Culin III, a tank commander in the 102nd Cavalry Reconnaissance Squadron, realized there had to be a better way. Seeing leftover scrap steel from German roadblocks, Culin and his fellow soldiers fabricated a plow attachment for their unit’s Sherman tanks to breach the hedgerow walls and regain mobility.

Referred to as a “Rhinoceros,” or “Rhino tank,” these M4 Shermans caught the eye of the division commander who wisely ordered the plow fabricated across the force. This battlefield adaption exists to this day: The M1 Abrams variant, called the Assault Breacher Vehicle, has a similar plow, which the Marine Corps recently used in Afghanistan. Culin later lost a leg in the Hurtgen Forest, but was awarded a Legion of Merit and recognized with a monument in his hometown of Cranford, New Jersey.

In 1912, Maj. R. L. McClintock, a young British officer of the Madras Sappers stationed in Bangalore, India, devised an improvised solution based on the reports written on British unit experiences during the Boer Wars that could be used to destroy enemy obstacles. It was later updated due to emerging trends on the western front of World War I. The combination of mines and wire with overwatch by machine guns was destroying units in the trench warfare of the early part of the 20th century. History would prove that this device was well conceived as it was used heavily by the Allied armies in both World War I and World War II. Bangalore torpedo variants are used to this day in militaries around the world.

The questionably delicious C-ration fueled the bellies of American and Allied troops for 40 long years, before an even more delicious food source was introduced: the Meal Ready-to-Eat. During Vietnam, U.S. troops were plagued by the high humidity and sweltering heat, which made carrying any unnecessary weight unbearable, if not dangerous. However, C-4 and other plastic explosives always made it onto the gear list. Used primarily to destroy enemy booby traps, troops found that the small nubs of C-4 also worked as an expedient heat-source to warm C-rations. This kept soldiers moderately well fed, and likely drove logistics officers crazy trying to account for the spike in plastic explosive use across the force. With a little battlefield ingenuity, the troops found a way to have a hot meal, and carry less equipment at the same time.

The Mine Resistant Ambush Protected vehicle, or MRAP, itself emerged out of a need by South African forces for up-armored mobility during the South African Border War in the 1980s following their experiences in Rhodesia, Angola, and South Africa fighting insurgents. The vehicle became a lifesaving necessity against improvised explosive devices in Iraq and Afghanistan when the Humvee’s thin armor proved vulnerable to the blasts. In 2008, several years before the MRAP variants were commercially manufactured with specialty turret configurations, I witnessed a vehicle that “Mad Max” would have cherished. A buddy’s platoon dropped a Humvee Tube-launched Optically-tracked Wire-guided missile, or TOW missile, turret with some slight modifications into an MRAP. The protective turret was a mixture of armor and glass protection with a specialized cut out to fit the TOW missile launcher that was too large to fit in existing turrets for machines guns such as the M2 machine gun or the M240 machine gun. It proudly patrolled the Kunar River Valley unleashing wire-guided freedom well after our unit left the theater. Even though the division inspector general office had concerns about the troops drilling through a small portion of armor, the tradeoff of protection and firepower was unmistakable.

In 2011, enterprising Iowa National Guard soldiers in Afghanistan realized they needed more ammo than they could carry for their MK48 machine guns in the conventional carrying bags. Inspired by the man-portable minigun in the movie “Predator,” they combined the newly issued medium rucksack with feed trays from other systems, and with some tinkering, created a backpack capable of carrying hundreds of rounds fed directly into the machine gun. This was such an inspired innovation that the Army Rapid Equipping Force produced its own version, named the Ironman Pack, for fielding across the theater.

There are doubtless other innovations that saved or improved the lives of service members in the field. Just like Maj. Gen. Leonard T. Gerow, the 29th Infantry Division commander that embraced the Rhino Tanks, leaders need to support and capitalize on the resources of our service members. It’s likely that there are plenty of soldier-made innovations that probably don’t pass the common-sense test, but there are many that will fundamentally change the battlefield both in the past and the future, if given the chance. At the end of the day, it’s not the scientists or acquisitions professionals who live and die by the equipment, it’s the individual soldier, sailor, Marine, airman, or Coastie who depend on these tools on the battlefield.