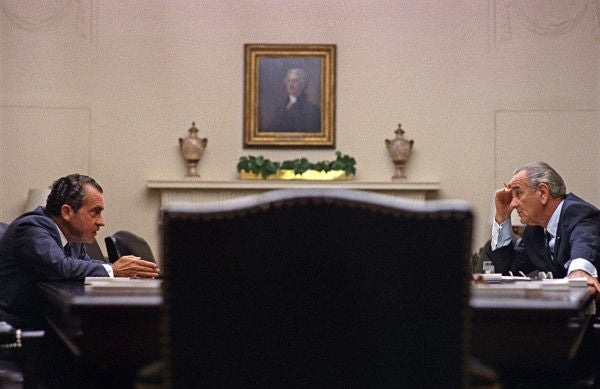 In recent comments, former Secretary of Defense Robert Gates described his take on current Republican presidential candidates’ grasp on national security concerns: “The level of dialogue on national security issues would embarrass a middle schooler. … People are out there making threats and promises that are totally unrealistic, totally unattainable.”

In Gates’ assessment, candidates’ promises — ranging from shutting down portions of the internet to indiscriminate bombing — are not viable solutions to deterring and ultimately defeating the Islamic State.

This election year, the voting public has heard a number of approaches to handling security threats such as the Islamic State. This fall, it decides on a president who represents, among many issues, its wishes on military action in the Middle East. On the Democrat side, Secretary Hillary Clinton plans to increase airstrikes, work with allies to deter ISIS recruitment, and provide better information sharing among partners and allies. Senator Bernie Sanders adds that the United States should work with our Middle Eastern allies to build a coalition.

Republicans provide many similar solutions. Sen. Ted Cruz seeks to defeat ISIS by calling it “radical Islamic terrorism” and shoring up the border. Businessman Donald Trump has no outline for ISIS on his campaign website, but vowed to “bomb the shit out of them.” Sen. Marco Rubio wants to build a coalition, expand airstrikes, provide weapons to rebels and Kurds, and remove Syrian president Bashar al Assad from power.

Candidates are never short on plans and promises to handle the security threat du jour. As a potential commander-in-chief assuming office while at war, they shouldn’t be. However, historically, candidates have made course corrections to wartime policy and strategy a critical plank to their political platform yet failed to meet their most ambitious goals.

Related: The real point of Eisenhower’s warning about the military-industrial complex >>

In his 1952, “I Shall Go to Korea” speech, presidential candidate Dwight D. Eisenhower outlined his new approach to ending the Korean conflict quickly and honorably. In typical campaign season fashion, Eisenhower placed the blame of something so difficult as Cold War-infused foreign policy and the two-year-old inconclusive war squarely on the shoulders of the incumbent. When the North Koreans crossed the 38th Parallel on June 25, 1950, “the record of political and diplomatic failure of this [Truman] Administration was completed and sealed.”

However, the former five-star general had a plan. To rectify Truman’s failings, Eisenhower would review the war’s strategy, examine the course of the war first hand, and place U.N. forces in a supporting role to Republic of Korea troops “to bring the Korean war to an early and honorable end. This is my pledge to the American people.” He stated, as unequivocally as a presidential candidate can, that “we will, of course, constantly confer with associated free nations of Asia and with the cooperating members of the United Nations. Thus we could bring into being a practical plan for world peace.”

Eisenhower split the difference in his campaign promise. The armistice between the North and South on July 27, 1953, effectively ended the war as far as the United States was concerned. However, world peace never broke out under a U.N. mandate. Eisenhower later admitted, “We have won an armistice on a single battleground – not peace in the world. We may not now relax our guard nor cease our quest.” With no peace agreement, North and South Korea are still in a state of war – a condition we are reminded of through cyclic saber rattling and recent nuclear tests. Only a few years after this armistice, a hot war returned to Asia.

Candidate Richard Nixon campaigned for office during some of the worst years of the Vietnam War. With the surprise of the January 1968 Tet Offensive, ineffective Rolling Thunder bombings, and frustrating peace negotiations, the U.S. public grew jaded on the war’s prospects. An unpopular draft only exasperated the problem. After President Lyndon Johnson’s expansion of the war in 1965 failed to provide significant progress, Nixon campaigned as a peace president. As part of his 1968 campaign platform, he stated:

Every American wants peace in Viet Nam. The question is what kind of peace. The war must be ended, but in a way that does not encourage aggression and thereby sow the seeds of future wars. Beyond this, we need a new diplomacy – one that looks past Viet Nam to the prevention of future wars, and one that enlists other nations more fully in their own defense.

In his 1972 Republican Party acceptance speech, Nixon promised, “we will not join our enemies in imposing a Communist government on our allies — the 17 million people of South Vietnam…we insist on an honorable peace in Vietnam.”

Part of these promises came to fruition — the enlistment of other nations in future conflicts — with seven countries contributing troops to Southeast Asia. Military leadership realized this campaign promise in the next big war more because of Vietnam’s heartbreaking outcome than any prescience on the part of Nixon. The experience generated one tenet of the Weinberger-Powell Doctrine to assure “broad international support” for any conflict. During the 1991 Persian Gulf War, the United States enlisted 35 other nations to expel Iraqi forces from Kuwait. Further, Nixon remained committed to his Vietnamization policy that transitioned ownership of the war from the United States to South Vietnam while U.S. troops redeployed from a wartime high of 569,000 to 69,000 by 1972.

However, the situation in South Vietnam was too much for one administration to control. Whether anticipated or not, rapid redeployments, drained public will, and a misunderstanding of the nature of the conflict from the beginning gave the North enough space to occupy Saigon by 1975 and impose a “Communist government on our allies.” Nixon’s 1972 promise fed a narrative of U.S. support to nations susceptible to Communist influence and overthrow — a foreign policy with roots in the 1947 Truman Doctrine — but was unsuccessful beyond a well-intentioned hope.

What’s interesting in both historical examples is how both Eisenhower and Nixon detected and promised based on the timbre of national mood of their respective periods. In the face of domestic war weariness, the candidates sought an honorable, yet expedited exit from the wars they were about to inherit. The draft was a major concern for both where the nation’s youth fought in far off Asian countries for reasons tangentially related to national security.

If the current candidates are feeding on the mood of the electorate as Eisenhower and Nixon did, we can assume the voters want more of a commitment without paying the bill, expanding the war on ISIS with serious caveats.

Current plans offer more: more airstrikes, more materiel support, and more of a coalition. Yet 76% of Americans are against any “boots on the ground” and 60% disapprove of the president’s handling of ISIS. Only 41% of Americans disapproved of Nixon’s handling of Vietnam in 1970. By this metric, the United States is more war weary now than it was in the final years of Vietnam. Plans to ramp up the fight against ISIS despite a general unwillingness to fight an enemy that many countries dislike is a profound disconnect between people, policy, and ambition. This may speak to a number of causes such as rhetoric to fire up the electorate, a fundamental disconnect between military and civilian, or an oversimplification of the situation. Or, who knows, maybe a greater commitment is necessary to defeat ISIS. However, one must question whether more of the same will work or if what is currently in place, Operation Inherent Resolve, is effective enough. In an operational environment where decisive defeats of an enemy are a hangover from last century’s warfare, seeking a place that is merely better than it was before and sustainable is the right target.

ISIS is far from degraded and ultimately defeated, but the region is in a better place now than if we did nothing at all. However, voters decide on their choice of campaign promise, and by extension, their choice of how to continue prosecuting the war. We decide if contributing more than the $11.4 million per day it currently takes to fight ISIS will be additive or will take us in a very different, unforeseen direction.