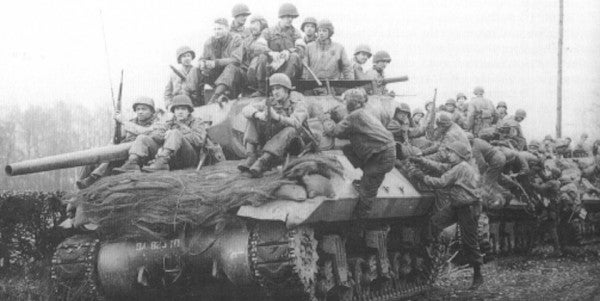 More than 70 years after North Carolina National Guard members returned from World War II, surviving veterans are hoping their unit can still get a presidential honor for its heroism and sacrifices.

The 30th Infantry Division, known as “Old Hickory,” included National Guardsmen from North Carolina and several other states. It was among eight divisions recommended in 1946 for the Presidential Unit Citation. But the citation was never awarded, thanks to what’s been described as a “paperwork logjam.”

Now the veterans are trying once more, with help from a much younger generation: Iraq War veterans who now lead the 30th Infantry Division Association, which held its 70th annual reunion this weekend in Raleigh.

Only President Barack Obama has the power to issue the long-delayed honor, so the association has started a petition on the White House website. The Obama administration provides a formal review and response to any petition request that garners 100,000 signatures.

“The 30th captured more than 6,200 prisoners, destroyed at least 191 pillbox positions, destroyed numerous German tanks and set the conditions for the capture of the town of Aachen,” the petition says. “Please help us gain the PUC for our WWII heroes within their lifetimes.”

As of Saturday, the petition had 1,225 signatures. And time is running out for the World War II veterans, only 10 of whom were able to attend the reunion this weekend. Most of the surviving members of the unit from that conflict are now in their 90s. The National WWII Museum estimates that only 698,000 of the 16 million Americans who served in the war are still living.

Hank Stairs, 92, now relies on a wheelchair to get around. He said he was determined to attend the reunion “to see my friends – it sounds cliche, but to remember our friends and their sacrifices.”

Stairs is among the vets who still have sharp memories of the 30th Infantry’s involvement in conflicts like the Battle of Mortain, a key part of the invasion of Normandy on the French coast.

“That was my baptism of fire,” Stairs says of Mortain, which was one of his first engagements after landing in Europe.

Reunions like the one this weekend are chances for World War II and Iraq veterans to swap war stories, and the younger association members have been working to preserve their older counterparts’ memories of the war.

The 30th Infantry Division sets sail for home on the Queen Mary and other ships, August 1945.

The group raised $35,000 to help finance a documentary about the history of the “Old Hickory,” which takes its name from President Andrew Jackson. And the group is collecting World War II artifacts, some of which were on display in a makeshift museum inside a hotel room at Saturday’s reunion.

“They want to know just as much about our experiences in Iraq as we want to know about their experiences in World War II,” said Wes Morrison, an Iraq veteran who serves as president of the association. “The Army as a culture doesn’t change that much. … What surprised me is how they treated me as an equal.”

As the number of living World War II veterans shrank, the association welcomed its first Iraq War vets about a decade ago. The younger veterans served in the 30th Armored Brigade Combat Team, which was formed from the 30th Infantry. There are no Vietnam War veterans in the group because the 30th wasn’t involved in the conflict.

“The organization will be alive for a lot of years in good hands,” Stairs said.

The Iraq vets say they’ve benefited from getting to know the men of World War II. Shortly before the Guard deployed to Iraq again in 2009, one of the older association members approached Morrison. “When you see a shadow behind you, it’s us marching with you,” the World War II veteran told Morrison.

That camaraderie is part of the reason the Iraq vets wanted to lobby once more for the Presidential Unit Citation. They’ve armed themselves with statistics to make their case: The 30th spent 282 days in almost constant combat. It had 3,435 soldiers killed in action and 12,960 wounded. Soldiers won six Medals of Honor, 65 Distinguished Service Crosses, 1,718 Silver Stars, 6,319 Bronze Stars and 20,000 Purple Hearts.

Army records indicate that then-Gen. Dwight Eisenhower, who later became president, took the 30th Infantry Division off the list recommended for the unit citation in 1946. Army leaders stopped reviewing applications in 1951 “because too much time had passed,” according to a 2014 letter from the Army to one of the association members.

That’s why the group has pinned its hopes on Obama. And even if the effort falls short, the younger veterans plan to continue getting together every year to honor the legacy of the 30th Infantry.