From Baghdad To Nomad: How Walking Across America Helped This Vet Recover From War

In 2013, Army veterans Anthony Anderson and Tom Voss set off on a 2,700-mile trek from Milwaukee, Wisconsin, to Santa... 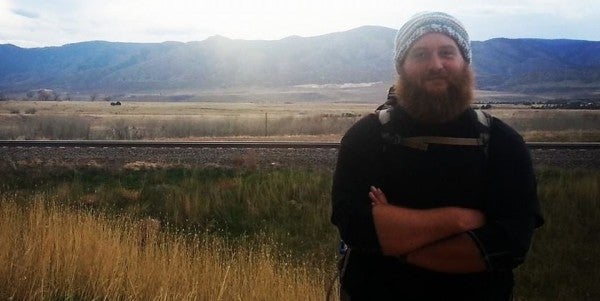 In 2013, Army veterans Anthony Anderson and Tom Voss set off on a 2,700-mile trek from Milwaukee, Wisconsin, to Santa Monica, California. For 155 days straight they marched along, at times in silence.

For Anderson, one memory in particular was at the forefront of his mind.

“During my first deployment, I was stationed in Baghdad and our gate was being hit by indirect fire, and we couldn't leave, so when they cleared the gate and said you guys can go, there were all these civilians lying on the ground,” Anderson told Task & Purpose, referring to his first tour in 2004. “They were bleeding and hurt and had basically been caught up in an attack.”

When the convoy rolled through the checkpoint, Anderson said he remembered a moment when time appeared to stop as he locked eyes with a man in a white robe lying on the ground. The man was clutching his stomach as red marred his clothes and blood pooled around him.

“Are we going to get out and help these people?” Anderson recalled asking.

The answer: No. They had a different mission. The convoy snaked away from the base, but the moment stayed with Anderson, along with regret, he said.

“It always bothered me because I knew better,” said Anderson. “I knew we should have done something.”

Anderson returned home from his second deployment in 2008 and left the Army as a sergeant shortly after. He said he felt “numb” with flashes of anger leading to arguments and confrontations until his daughter was born in 2012.

“I think the one incident that really kind of motivated me was the birth of my daughter,” said Anderson, adding that when he held her for the first time, he had a feeling deep in his chest.

Related: 2 Veterans Embark On Epic Mission To Be The First Combat Amputees To Climb Everest »

“It felt really good, and it felt familiar and it also felt foreign … I think I just felt happy, for the first time in a really long time,’” he recalled. “It was a break in the bullshit and allowed me to see there’s something more.”

Voss, a former infantryman who did a one-year deployment to Mosul, Iraq, in 2004, and a friend of Anderson’s from their time working as veteran peer mentors, approached him with an idea in May 2013. The plan was to head to California, on foot, as a way to cope with the lingering memories of war and hopefully find peace. Anderson agreed, and on Aug. 30, 2013, they set off.

For five months, they walked alone along highways and backroads. At night, they’d stop to sleep at a hotel, or at the house of a friend or a stranger who followed their journey on social media. Then, the next morning, they would set out again, and in time, it developed into a routine akin to a deployment, says Anderson.

But when you’re dog tired, with blistered feet, there’s nothing to keep you occupied but your thoughts.

“When you have the time and you’ve walked yourself tired, when the thought enters your mind: Why am I angry? Why am I depressed? You don’t have the energy to resist it anymore,” Anderson said. “The thought enters and you’re like, yep, I’m angry because I don’t feel good about myself. What do I do with the anger? I start to pick fights. I argue.”

On Feb. 1, 2014, Voss and Anderson arrived in Santa Monica, their stopping point on a long and deeply personal odyssey.

“One of the greatest things I learned on the walk was that war lasts forever, and the lessons you learn from it, you can either communicate the negative or you can try to find the positive and build off of that,” said Anderson.

“I think a lot of veterans don’t get that opportunity, we come home and we have to go to school right away, find jobs, and be responsible adults, so we don’t really do it at all,” he says. “If you don’t take the time to be with yourself you miss out on opportunities to really understand what you went through.”

Their journey is the focus of the documentary film “Almost Sunrise,” which debuted over Memorial Day Weekend in 2016 and focuses on the heavy toll of moral injury in war. Check out the trailer below.