War taught me how to poop the right way

"Pooping: We don’t talk about it enough — at least not in earnest." 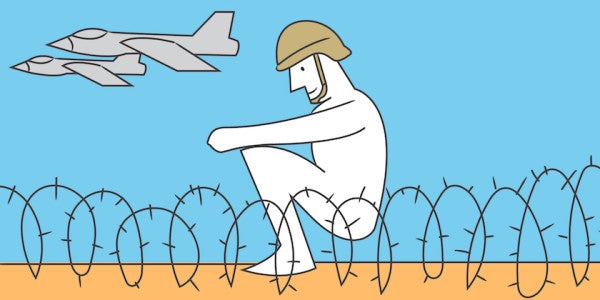 I remember the first time I ever saw an Afghan man poop. It was the summer of 2010, and my platoon had taken a tactical pause in a village somewhere in rural Kandahar, where farmers harvest opium for a living and plumbing doesn’t exist.

It happened so quickly I nearly missed it. As we began forming a security perimeter, one of our Afghan army partners casually slipped behind some nearby bushes, pulled his trousers down, and dropped into a deep squat. By that point, it was obvious what was going on, but you wouldn’t know it by the look on his face. He appeared calm — peaceful, even. There is nothing pleasant about witnessing another man defecate, but I’d be lying if I said I wasn’t impressed.

Less than a minute later, he was back on the road. On our next patrol, I took a trip to the bushes myself.

Pooping: We don’t talk about it enough — at least not in earnest. The last time I had a real conversation about my bathroom habits was at age three, when my parents gave me a lesson on wiping my own ass. But it would be more than two decades before war taught me that there’s another way to “take out the trash.”

In the intervening years, I simply believed on some subconscious level that, at the exact moment monkeys evolved into human beings, some chair-like apparatus with a hole in the middle miraculously sprung from the Earth to catch their turds. In school, my teachers never taught me that the flush toilet wasn’t invented until 1596 and didn’t become widespread in the West until the mid-19th century. Or that at least half the human population still poops in the squatting position.

Of course, had I known these things, I likely would’ve continued pooping the Western way. I’m no renegade. But at least I would’ve known, as I do now, that every time I sat on a toilet I was depriving myself of a much healthier — and more efficient — bathroom experience.

I’m not a scientist, nor am I a spokesman for the tried-and-true Squatty Potty (just watch the commercial, featuring a baby unicorn shitting rainbow-colored ice cream). I’m just a guy who’s crapped in a lot of dirt holes. But simple science supports what I know in my heart is true: If you sit down to make brown, you’re doing it wrong.

Just think of your gastrointestinal tract as a slimy hose. Food goes in one end (your mouth) and comes out the other (your ass). However, it’s not a straight, smooth ride all the way down. There are a lot of ups and downs, like a rollercoaster, and junctions along the way — places where the food is broken down and stripped of its nutrients as it’s transformed into poop. By the time whatever you ate reaches the final section of your large intestine, the transformation is complete. Presto change-o.

Now, there’s only one thing left for the poop to do: evacuate your body. This is supposed to be the easy part, but when you sit on a modern, man-made toilet, you make it difficult for the sharp bend between the rectum and your butthole to naturally straighten and allow for a prompt and speedy exit.

In other words, the modern toilet keeps your hose kinked, and to get the poop past that kink, you have to bear down. Some people relish the struggle, but your body doesn’t. The strain on your bowels can result in health problems like constipation, hemorrhoids, hernias, and diverticulosis.

But I didn’t need some doctor or an ice-cream-crapping baby unicorn to convince me that the way people defecate in the West is inferior to the way people crap almost everywhere else. I learned how to shit in the shit. The first time I snuck off into the bushes during a patrol and dropped a tactical deuce, I felt like Christopher Columbus stepping off the Santa Maria onto the shores of Venezuela.

That Afghan soldier had introduced me to this ancient pooping custom, and — just as Columbus did with everything he discovered in the New World — I appropriated it. Squatting was mine to keep now.

The technique caught on like wildfire among the guys in my platoon. Soon, we were crapping all over Kandahar — in pomegranate orchards, in grape fields, on the floors of abandoned compounds, into the cold, clear waters of meandering streams. My old squad leader recently sent me a thumb drive with photos from our deployment, including at least a dozen photos — and one video — of guys taking tactical deuces.

But despite our newfound fecal freedom, something curious would happen every time we’d return to the FOB: When given the choice between the Afghan toilets and the Western-style latrines, we’d always opt for the latter. We were prisoners of our old ways.

I remember lying in my sleeping bag one night toward the end of that deployment, thinking about all the cool stuff I was going to waste my deployment money on when I got home. No. 1 on the list: the biggest, softest bed I could find. I’d rent a nice house somewhere quiet and keep the fridge stocked with cold beer and pounds of steak, and sleep like a baby in that big bed every night. In the backyard, there’d be a charcoal grill and a fire pit where my friends and I would get drunk and shoot the shit on warm summer evenings. And beyond that, there’d be a little grove of trees, in the center of which I’d dig a nice, deep hole and place two wooden planks on either side, a simple, inviting burrow where I’d take my shits.

That was my plan. But the second I stepped foot back on American soil, the idea of shitting in my backyard like some sort of deranged cat lady seemed completely absurd. It still does. When I look back at the person I was in Afghanistan, it’s like perusing the Facebook feed of an old friend I hardly know anymore. He’s healthy, strong, rugged, cocky — a guy who thought he was going to be a grunt forever.

I never moved into that dream house. I live in an apartment in Brooklyn, and my bed is small. There’s no grill or even a yard to put it in. Pretty much all of the bad tendencies I had before the Army — the drinking, the laziness, the lack of regard for my physical and mental health — have returned. I’m back to being the civilian version of me.

In Afghanistan, I learned that the best way to take a dump is with your knees up and your back straight, but I saw the light and turned away. I’m an American, reared on double-bacon cheeseburgers, Big Gulps, and flushing toilets. I came home to a society that tells us war poisons the mind, that the faster we shed the habits and attitudes we pick up overseas and readjust to civil society, the better off we’ll be.

I don’t necessarily agree. There’s a big park down the street from my apartment. Maybe one day I’ll muster up the courage to venture into the woods there and do an all-natural number-two. Or maybe I’ll just buy a Squatty Potty.