If you’re a former militant who fought for Russian separatists in Ukraine, has ties to Euro right-wing racist groups, and... 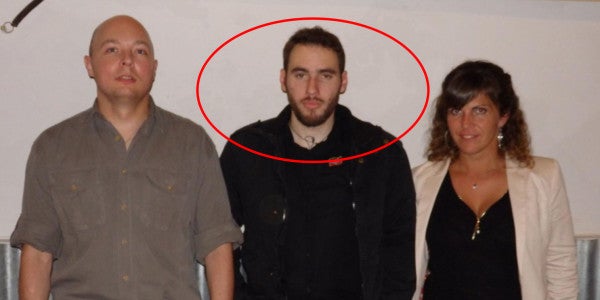 If you’re a former militant who fought for Russian separatists in Ukraine, has ties to Euro right-wing racist groups, and somehow managed to squirrel your way into the U.S. Army infantry’s divisions, Thomas Gibbons-Neff will find you.

That’s the obvious conclusion from Marine veteran and Washington Post reporter Gibbons-Neff’s big scoop Monday, a story that’s sure to stick in the craw of every poor enlistee who had to beg for a waiver for that questionable spring-break tattoo. Behold the path that led soldier of fortune Guillaume Cuvelier, 29, to basic training at Fort Benning in January:

Born and raised in France as a dual French and American citizen, Cuvelier spent his formative years alongside French ultranationalists before picking up a Kalashnikov in eastern Ukraine in 2014, according to social media posts, a documentary in which he was featured, and accounts from people who knew him. A year later he fought with the Kurdish peshmerga in northern Iraq before coming back to the United States.

Following inquiries by The Post, the military has “begun an inquiry to ensure the process used to enlist this individual followed all of the required standards and procedures,” said Kelli Bland, a spokesman for the U.S. Army’s recruiting command, in an email.

Cuvelier’s Russian-supported insurgent group in Ukraine was targeted for sanctions by the U.S. government — which, Gibbons-Neff points out, means Cuvelier’s activities appear to violate U.S. law, as well as the Army’s prohibition on “extremist views or actions” in enlistees.

But wait, there’s more! Cuvelier “was an active member in the Party of France,” which is a fringe offshoot of the right-wing, anti-immigrant Front National, according to Gibbons-Neff. He “was also part of the neo-fascist group ‘Troisième voie’ and an identity movement called the ‘Young Identitarians,’” which is essentially a rising international millennial white-power movement.

Also, Cuvelier ran with a unit of Russian separatists that named themselves after a Norwegian Nazi black-metal rocker and convicted murderer who was maybe planning to do some more murdering; he has a possible connection to a Russian officer implicated in the shootdown of Malaysian Airlines MH-17 in 2014; and the Peshmerga kicked him out of their Iraq camp after “he was accused of beating an American volunteer with a rifle, according to Heloisa Jaira, a Peshmerga medic, who treated the victim.”

And just think: You got shit for putting your foreign-born grandmom down on your SF-86.

Gibbons-Neff reached out to Cuvelier for comment. “By publishing a story on me, you are jeopardizing my career and rendering a great service to anyone trying to embarrass the Army,” the probably-soon-to-be-ex-soldier told the reporter in a text. “My former Russian comrades would love it… so, I please ask you to reconsider using my name and/or photo.”

Yeah, it’s the story that’s embarrassing, bro. Good luck in your future endeavors as this guy.