The U.S. Army will soon offer $5,000 bonuses to persuade top-performing soldiers to join a set of new training and... 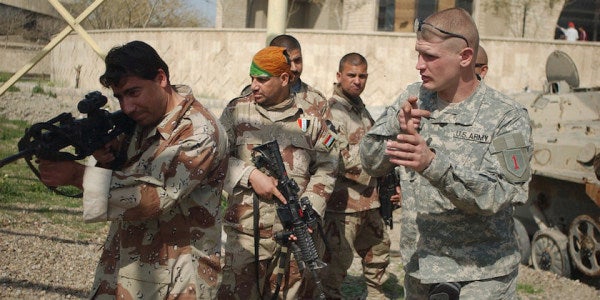 The U.S. Army will soon offer $5,000 bonuses to persuade top-performing soldiers to join a set of new training and advising brigades that could begin deploying to conflict zones around the world as soon as 2018, the Associated Press reports.

The creation of five training and advising brigades signals the Army’s intent to shift away from the conventional units and tactics that yielded a significant number of casualties in Iraq and Afghanistan but few lasting results; government forces in both countries were thrashed by revitalized insurgencies soon after coalition combat troops pulled out.

The new brigades will be specially equipped for the mission of training and building up local security forces (which is also one of the primary missions of the Army Special Forces) to prevent Islamic militants from once again overrunning the countries after U.S. forces depart.

Once they’re stood up and operational, the so-called Security Force Assistance Brigades will deploy in place of the combat brigades currently utilizing small portions of their units to training and advising missions in Iraq and Afghanistan. As the AP notes, detachments from three brigades are in those countries right now.

“It separates the leaders from those they lead, and it degrades readiness significantly,” Gen. Robert Abrams, head of U.S. Army Forces Command, told the AP.

At the height of the wars in Iraq and Afghanistan, the Army’s brigade combat teams, or BCTs, were often tasked with training and advising local forces, which they’d also partner with on missions outside the wire. It seems the Security Force Assistance Brigades will remain more firmly behind-the-scenes, focusing exclusively on preparing local forces to fight on their own.

“It’s a recognition that this is an enduring requirement for the conventional Army,” Abrams said. “Most times we’re falling in on existing institutions that are probably failing, and bringing them up to a certain competency level so they can secure themselves. And we’ve got to do that on a large scale.”

Abrams told the AP that the first Security Force Assistance Brigade could be ready to deploy overseas by the end of 2018, probably to Iraq or Afghanistan. The brigade will consist of a total of 529 soldiers, 360 of whom will be officers. Only enlisted soldiers and non-commissioned officers qualify for the $5,000 signing bonus, which will become available in June.

About 90 civilian and military staff members are now being recruited for a military assistance training academy being stood up at Ft. Benning, Ga. The first class is slated to begin in October. All 529 soldiers will undergo a six-to-eight-week training course. 200 will receive 16 weeks of intensive language training, while others will attend an eight-week course.

In the meantime, a colonel chosen by the Army to lead the first Security Force Assistance Brigade will visit various military posts in the coming weeks to recruit volunteers for the unit. Soldiers for the second brigade will be selected in about a year, and all five brigades will be stood up by 2022.