The Army’s inability to fill its ranks may mean mad money for soldiers considering reenlistment. As the branch struggles to... 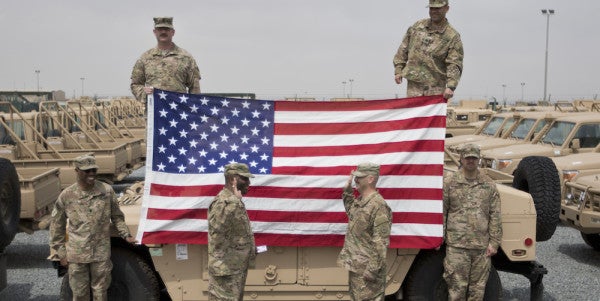 The Army’s inability to fill its ranks may mean mad money for soldiers considering reenlistment. As the branch struggles to increase troop levels, it’s increasing its bonus budget request for fiscal year 2018 threefold to more than $380 million, reports the Associated Press.

Roughly translated, some soldiers may be eligible to receive $90,000 up front when they sign on to serve an additional four years or more.

Army force levels are set grow by an additional 16,000 soldiers by October, bringing the total number of troops to 476,000. During his campaign, President Donald Trump had suggested he wanted to grow the Army to 540,000 active-duty soldiers.

“We’ve got a ways to go,” Gen. Robert Abrams, head of U.S. Army Forces Command, told the Associated Press in an interview from Fort Bragg, North Carolina, on June 6. “I’m not going to kid you. It’s been difficult because a lot of these kids had plans and their families had plans.”

To reach desired numbers, the Army will need to enlist 6,000 new recruits, retain an additional 9,000 current soldiers, and add 1,000 officers. Over the last two weeks, the Army has paid out over $26 million in bonuses, writes the Associated Press.

“The increased end strength of the Army will enable it to better meet the challenges of an ever-uncertain security environment but must be balanced against the readiness of the Total Force,” the Army said in a press release.

Officials tell the AP that their biggest concern between now and October will be whether they can persuade thousands of enlistees who are only months away from leaving the service to consider staying on active duty for four or more years.

They say many soldiers are looking seriously at separation plans and have already turned down a number of Army reenlistment incentives.

Who knows? Maybe sweetening the deal to $90,000 upfront will be enough to change their minds.