The Army Is Getting The Additional Troops It Asked For. Now What? 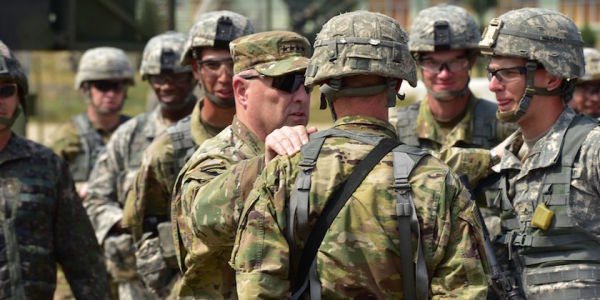 Last week, Army Chief of Staff Gen. Mark Milley presented the rifle of a fallen World War II soldier during a speech at an event hosted by the Association of the United States Army, a nonprofit advocacy group. The rifle was intended as an ominous reminder of the ever-looming possibility of global warfare.

Milley’s remarks echo a pervasive concern within certain circles in Washington, which is that, as a result of defense budget cuts under the Obama administration, the U.S. military is not prepared to prevent the outbreak of a third World War.

Congress addressed that concern in the 2017 National Defense Authorization Act, which was signed into law by President Barack Obama on Dec. 23. The act requires the Army to increase the number of active duty soldiers to 476,000 by Oct. 1. That’s a 16,000 boost from the previous end strength plan.

It’s going to be a busy year for Army recruiters; although, as Army Times notes, some of those numbers will be achieved through retention efforts.

The decision to grow the Army is not without its critics. In a statement released by the White House on Dec. 23, the same day the 2017 National Defense Authorization Act was enacted, Obama called the troop increase unnecessary and counterproductive.

“Congress again failed to enact meaningful reforms to divest unneeded force structure, reduce wasteful overhead, and modernize military healthcare,” the president wrote. “Instead, the Congress redirects funding need to support the warfighter to fund additional end-strength that our military leaders have not requested.” Adding, “Increasing force structure without adequate funding support in the base budget is dangerous.”

Milley seems to agree with Obama’s opinion that simply adding more soldiers will not result in a stronger military. However, in his speech, Milley argued that the solution isn’t to keep troop numbers at their current level, but to bolster a larger force with additional funds.

“If we just get additional people, or additional end strength, but we don’t get the money, that just leads you down the path to a hollow force,” he said, noting that the first priority will be to reinforce existing organizations, after which the creation of new battalions or brigades will be considered.

“Readiness is not something that is going to be produced overnight,” Milley added. “It’s something that requires steady predictable funding over time and steady effort from the force.”