While much of the Air Force spent 2014 worrying about force cuts, a select group of airmen faced the exact... 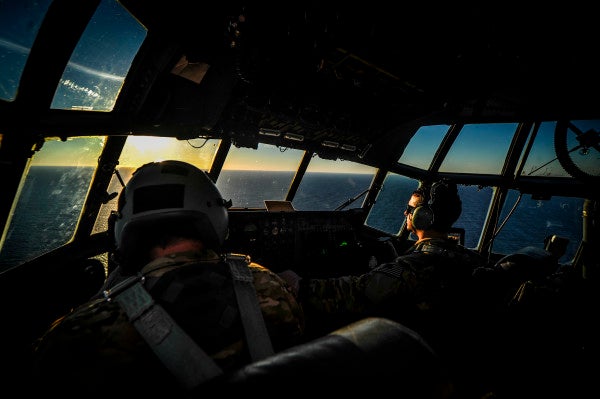 While much of the Air Force spent 2014 worrying about force cuts, a select group of airmen faced the exact opposite situation. A small selection of pilots and combat systems officers were eligible for up to $25,000 per year if they signed up for an additional service commitment. Because they are in particularly high demand, fighter pilots could sign up for an extra nine years, earning them $225,000 in retention bonuses over that period. So, why is the Air Force paying some individuals to stay while forcing other airmen, including pilots, to leave? The answer to that lies in how pilots are made.

It takes approximately 14 weeks to get an Army infantry soldier through his first set of training and ready to go to his unit. By contrast, an F-22 pilot can take upward of three years to train before his or her first assignment. Undergraduate pilot training takes a full year, then there is the introduction course to fighter fundamentals, initial F-16 flight training, and F-22 formal training. In addition, pilots must complete water survival, land survival, resistance training, and moves between training locations — all just to qualify someone as wingman in a multi-aircraft formation. Then there is flight lead upgrade, instructor upgrade, and evaluator experience. These upgrades take many years and multiple assignments. Finally, just as someone is getting to the peak of his or her experience in the aircraft, they complete their 10-year undergraduate pilot training commitment and are free to leave the service.

Despite the incentive of getting paid an extra $225,000, pilot retention is still slowly declining. First created in 1989, the Aviator Retention Program is the primary way the Air Force attempts to keep seasoned pilots in the service. In 1993, roughly 80% of pilots elected to stay in the service more than 11 years. Today, that number has dropped to 65% and this decline has led to the Air Force active, guard, and reserve components being 600 fighter pilots short of their target readiness numbers.

How the Air Force ended up in this situation has many different explanations. The budget cuts of 2013 didn't help when 17 squadrons in Air Combat Command had to suspend flying operation for months. As money gets diverted to other readiness operations, flight hours for Americas pilots continue to fall and are now below the level of pilots in China. And as former Acting Secretary of the Air Force Eric Fanning said, “Pilots want to fly.”

With decreasing opportunities to fulfill this life goal, many pilots are looking elsewhere. This is happening at a time when commercial airlines are facing steep shortages in manpower. These airlines offer higher pay and better living conditions than the military can hope to match. Industry experts expect a massive hiring boom of up to 50,000 pilots over the next 10 years. Also contributing to poor retention rates is the recent history of a decade of war and some of the lowest military morale seen in years.

These realities are not new; they received a great deal of press near the end of 2013, but were overshadowed by the force management cuts of 2014. Now questions need to be asked about how the Air Force should balance these two worlds: fiscal austerity demanding a reduction in force and manpower expenditures, while also protecting the critical assets represented in highly trained pilots.

From the outside, as well as from the inside, it would be easy to think that a pilot is a pilot. If the Air Force wants fewer mobility pilots and more fighter pilots, just shift people from one assignment to the other. Despite sounding plausible, this is highly unlikely to happen. During Vietnam, the Air Force adopted the idea of a “universally assignable” pilot and it led to universally bad results. By acting as if flying an F-101 was the same as flying a KC-135, pilot proficiency in their assigned aircraft dramatically declined and led to the death of many people. In 1966, Air Force pilots were lost to enemy action at the rate of 0.25 aircraft per month. By 1968, they were lost at 4.5 per month, according to the “Sierra Hotel” report by C.R. Anderegg.

Though not implemented until 1992, the numerous reviews and policy directives that ultimately produced specialized undergraduate pilot training date back as far as 1974. This training program created two tracks, fighter/bomber and tanker/transport, which Air Force pilots would graduate from. When combined with the already-existing bias favoring fighter pilots, and the high cost of sending a mobility pilot through over a year of additional training, it makes almost any plan of transferring mobility pilots, except in a few rare cases, unreasonable.

However, this doesn't answer all of the questions about retention bonuses because older mobility pilots were offered the pilot bonus while younger mobility pilots were offered separation pay to leave the Air Force during the same fiscal year. More than anything, this is a result of the end of the Iraq and Afghanistan wars and budget cuts. Changes in the crew ratio for many mobility air frames means that for every C-5 or C-17 in the Air Force inventory, fewer crews will be available to fly them. As a result, the Air Force needs fewer young pilots, while it still requires older pilots to fill leadership and staff roles. The most recent defense budget passed through Congress authorized the deactivation of two C-17 squadrons, reducing both manpower and aircraft. Though it can seem counter intuitive, force drawdowns will always disproportionately affect the lower ranks because the Air Force wants to maintain a leadership structure that can be filled with new recruits as needed. A mobility pilot with experience in both a tanker and cargo aircraft, as well as staff experience, takes just as long as any well-trained fighter pilot to train and develop, making older mobility pilots an important commodity.

So if we need experienced pilots, is the Aviator Retention Program the best way to keep them in a fiscally constrained environment? The easy answer is yes. It costs approximately $6 million to train a basic qualified fighter pilot; an additional $225,000 to retain fighter pilots in the service is a great investment. However, that still doesn't solve the problem of decreasing pilot retention. In the long term, how high can the service go with its payments to aviators? How much money will it take to keep those pilots from looking for greener pastures?

Air Force Chief of Staff Gen. Mark Welsh has hinted at another way forward. Speaking to the National Guard Association of the United States in August 2014, Welsh said, “If we can become more efficient as an Air Force … by putting more things in the Air Guard and reserve component, then why wouldn’t we?” Though his remarks weren't explicitly tied to pilot retention, this could represent an excellent way forward. Currently, the reserve component of the Department of Defense represents about 39% of the personnel, but only 9% of the budget. Finding new ways to entice pilots into reserve billets would allow the Air Force to save money, retain talent, and sidestep the pay and lifestyle competition with the airline industry.

The final piece of this puzzle will ultimately be to reduce the number of pilots the Air Force is looking to employ. As already mentioned, the Air Force is reducing its mobility requirements and cuts are also on the horizon for the fighter community with attempts to eliminate the A-10 from the inventory. However, outside the A-10, there seems to be little discussion about reducing the size of the combat Air Force. The clear reason for this is that once the Air Force reduces its combat capability, it will take years to bring back.

As with all of the force reductions occurring across the military, the most important consideration is what we want that military to be able to accomplish now and in the future. If we want to ensure the Air Force can continue its 61-year streak of not having ground forces killed by enemy aircraft, then we will have to pay for it. Though it is impossible to know exactly how much that streak costs, certainly no soldier, sailor or airman wants to err on the low side.