The Army Will Now Offer Cash Bonuses And 2-Year Contracts 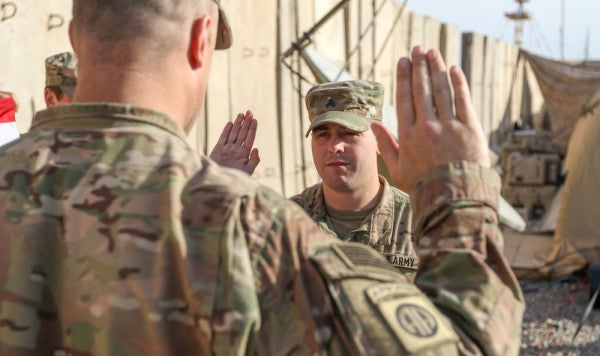 The U.S. Army has decided to reverse the drawdown, and needs to staff up with another 6,000 recruits in 2017, Army Times reported Feb. 19. How they plan to do it? Big cash bonuses and shorter contracts.

With the addition of two-year enlistments across 100 military occupational specialties and an investment of $300 million in enlistment bonuses, the Army hopes it will be enough to entice soldiers to continue serving, and new recruits to join.

For some, the bonuses may reach up to $40,000. And although two-year enlistments are not new, they were previously generally limited to very few MOSes. Now, 94 specialties will offer the shortened contracts. What’s more, those two-year stays will garner education benefits, wherein up to 80% of that soldier’s college degree can be covered by the GI Bill.

The mandate is expected to put the active component at 476,000 soldiers by Sept. 30. However, the branch still faces budget uncertainty.

“We’re going to go back and ask for more money,” Sergeant Major of the Army Dan Dailey told Army Times.

“For the last several years, we’ve been talking about the risk with the size of our force,” he added. “We need the resources to accomplish the missions we have at hand.”