The U.S. military Tuesday morning announced the death of a service member in a firefight that injured four more American... 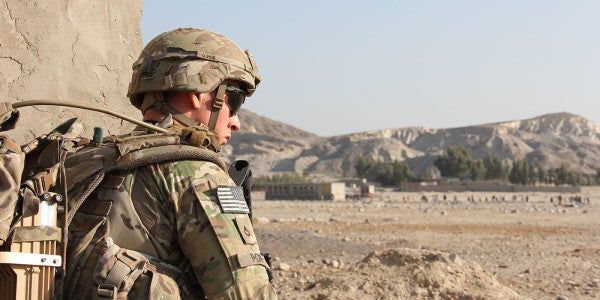 The U.S. military Tuesday morning announced the death of a service member in a firefight that injured four more American troops in Afghanistan’s Nangarhar Province on Jan. 1 — the first U.S. combat fatality of 2018, and a stark reminder of the challenges facing U.S. troops in the year ahead.

On the very first day of 2018, one U.S. service member killed and four more wounded in an operation in Afghanistan's Nangarhar province. RIP. pic.twitter.com/mutqwrfcfS

Details are scant on the engagement that killed the service member, who remains unidentified pending notification of his family. A press release from U.S. Forces-Afghanistan said the attack occurred in Achin, a Pashtun district identified by some local observers as a “headquarters” for ISIS activity in the country.

“We are deeply saddened by the loss of one of our own,” Gen. John Nicholson, the commander of U.S. Forces-Afghanistan, said in the statement.

Saddened, but not surprised: As ISIS was routed out of its strongholds in Syria and Iraq last year, the crippled organization has shifted back to a franchising-and-insurgency strategy — one that’s made its ragtag Afghan offshoot, ISIS-Khorasan, a serious player in Nangarhar and a serious threat to the U.S. forces hunting its fighters there.

Renewed U.S. engagement in Nangarhar literally began with a bang in 2017. Last April, defense planners made global headlines with their first real-world strike using the “Mother of all Bombs” — the massive ordnance air blast, aka “the mother of all bombs” — one of the largest conventional munitions in the U.S. arsenal. The target: a network of ISIS fighter tunnels in Nangarhar’s Achin district.

Authorities claimed the MOAB killed nearly 100 enemy fighters, but for all the fanfare, it didn’t take ISIS out of the fight: Just two weeks later, two U.S. Army Rangers died in fighting with ISIS combatants near the blast site (reports conflicted on how they perished in the three-hour engagement).

Nor has ISIS been the only threat to U.S. troops in Achin. Last June, three American troops were killed in an apparent insider attack by an Afghan soldier; Taliban forces later took responsibility for that ambush. Of the 11 service members confirmed by the Pentagon as killed in action in Afghanistan last year, at least 7 — all Rangers, Green Berets, or Air Assault soldiers — gave their lives in Nangarhar.

48 hours into what will be the 17th year of the forever war. Another press release and another flag-covered casket. pic.twitter.com/R2HRHdsecI

What is the way forward? For now, much of the same. In Nangarhar — as in Syria, Iraq, Niger, and elsewhere — overwhelming U.S. firepower is targeting Islamist fighters; accumulated U.S. know-how is guiding local forces to stand up for themselves; and increasingly elite U.S. troops are putting themselves in danger to make it all work.

Maybe, eventually, it will work. But the payoff of America’s 17-year-old war posture remains unclear, even if the price is obvious — and unchanging.