The German Army Is Battling Stolen Guns, False Flag Plots, And Nazi Extremism Within Its Ranks

Gear accountability: There’s a reason it’s pounded into a service member’s head from day one at boot camp. You're being... 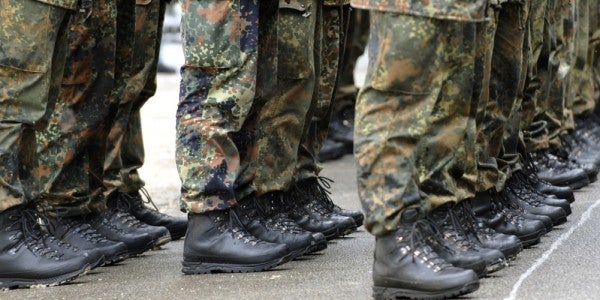 Gear accountability: There’s a reason it’s pounded into a service member’s head from day one at boot camp. You're being handed a perfect killing tool, its destructive power utterly dependent on whoever squeezes the trigger. And that’s the thing about your weapon: when someone jacks it from, let’s say an armored vehicle at a German Army base, it stops being yours.

That’s precisely what happened in February when a cache of military weapons and gear were stolen from a facility in northern Germany, according to the Associated Press.

The theft only came to light on May 11 when the German Defense Ministry announced that two G36 assault rifles, one P8 pistol, a flare gun, two mags (sans ammo) a pair of radios and one set of binoculars were stolen from inside an armored vehicle on a military training facility near Münster, Germany earlier this year.

Related: Someone Stole A Humvee From An Ohio National Guard Armory »

This would be concerning on its own, but this incident comes as the German military investigates a far-right assassination plot by a civilian and two soldiers in which one perpetrator posed as a Syrian refugee with the intent of carrying out a “false flag” attack to cast suspicion and blame on refugees flowing into the country. From the BBC:

“The soldier was first detained by Austrian police in February after he tried to retrieve a handgun he had hidden in a toilet at Vienna airport.

He was released but police subsequently discovered the suspect had registered as a Syrian refugee at a shelter in central Germany in December 2015 and later officially requested political asylum in Bavaria, prosecutors said.

No concerns were raised at the time, despite the man speaking no Arabic. German media report that he even received monthly payments and accommodation.”

As part of the planned attack, which targeted pro-refugee politicians, the two soldiers appear to have stolen ammunition from a military depot, according to information uncovered in a series of recent raids after the plot was discovered in April.

That’s not even all of it. After the Tom Clancy-esque plot surfaced, military investigators incidentally turned up Nazi-era military memorabilia that revealed a broader presence of far-right extremists within the German military, a source of major anxiety given the country’s legal prohibitions against Nazi symbolism. There are currently 275 cases involving accusations of far-right extremism within the last six years, according to a New York Times report:

“The number represents a small minority in a force of nearly 180,000. But nearly 70 percent of cases have emerged in the last year and a half, pointing to an accelerating problem that German military authorities are only now scrambling to address.

The revelations, in the middle of an election year, have set off sniping between the civilian and military authorities bordering on scandal. They have also added a disturbing new dimension to Germany’s effort to address a surge of extremist activity since the country took in nearly one million refugees in 2015.”

It’s unclear at this time whether or not the most recent theft is at all tangled up in all the other Nazi-false-flag-assassination craziness, but one thing is certain: If you’re stationed on a German military base, you need to keep your shit locked up tight.