Marines Will Get More Norway Deployments, And Russia Will Not Be Happy

The Marine Corps is extending deployments in Norway, bolstering ties between the United States and its European allies, and needling... 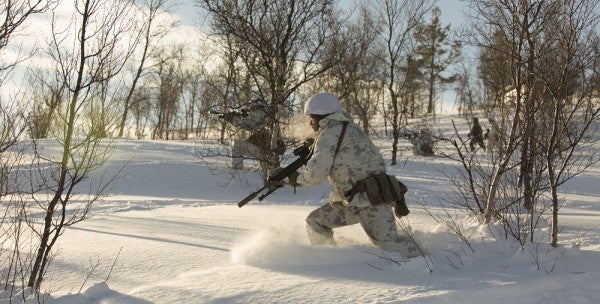 The Marine Corps is extending deployments in Norway, bolstering ties between the United States and its European allies, and needling Russia in the process.

Roughly 330 Marines have been supporting their NATO partners with training exercises in Vaernes, in central Norway, since January, but those rotations will now continue through 2018, according to a Department of Defense press release.

“Our Marines in Norway are demonstrating a high level of cooperation with our allies,” Marine Corps Maj. Gen. Niel E. Nelson, commander of U.S. Marine Corps Forces Europe and Africa said in the release. “The more we train together alongside one another the stronger our Alliance becomes.”

The Marines at Vaernes are about 900 miles from the Russian border, but Norwegian and American defense officials downplayed any link between the January Marine deployment and rising tensions between NATO and Russia since the beginning of the year.

“It has nothing to do with Russia or the current situation,” Rune Haarstad, a Norwegian Home Guard spokesman, told Reuters on in January 16, when the first Marines deployed. The training mission focuses on warfare and survival in an arctic environment, including participation in the Norwegians’ annual “Exercise Joint Viking,” because when you operate in the European cradle of death metal, your operations need a metal name.

Related: The Corps Is Developing A Plan To Base Marines In Norway »

However, Russian officials haven’t been pleased with the devil dogs’ winter-wonderland deployment.

“The relationship between Norway and Russia is put to a test now,” Maria Zakharova, a Russian Foreign Ministry spokeswoman, told an interviewer in January. “Instead of developing economic cooperation, Norway is choosing to deploy United States troops on Norwegian soil.”

The Marines and Norway have a longstanding relationship stretching back to the Cold War, but the January deployment and the continuing rotations mark the first time foreign forces have been stationed in Norway since World War II, according to Business Insider.

The newly announced deployments will consist of two rotations a year, but the cap appears to be set at roughly 330 Marines, who will continue to train alongside Norwegian forces.