That F-22 Vs. F-35 ‘Dogfight’ In Norway Was Not What Everyone Thinks 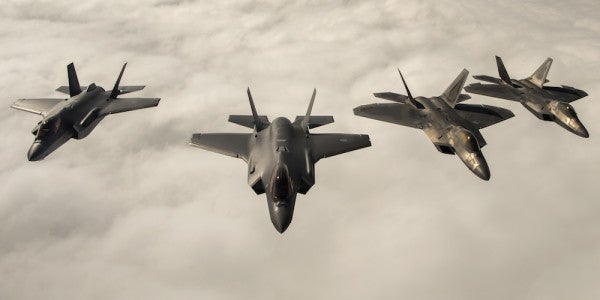 There are very few details available about the exercise, but some inferences can be made about the type of training the two sides undertook.

The Norwegians, for their part, were impressed by the Raptor’s fearsome air-to-air prowess.

The Norwegians told Shalal that practicing with the American F-22s provided the stealthy new jets with training opportunities that would not normally be available since the F-35s are usually able to surprise and “overpower” conventional non-stealthy aircraft.

Unsurprisingly, as a professional air force, the Norwegians refused to discuss which side “won” during the training exercises. Generally, such discussions are held in confidence during a debrief after a sortie between the participants.

In general, there are a few assumptions that can be made based on how U.S. and NATO alliance air forces operate. Professional air forces do not engage in the sort of chest-thumping bravado one might see in movies such as Top Gun, rather the entire affair is about building professional competence. That includes developing aircrew skills, practicing and refining tactics, techniques and procedures among other things.

Further, when there are air forces from different allied states participating, those air forces are often trying to develop professional relationships between their aviators and building interoperability between their forces. That is so they are familiar with each other’s tactics and procedures in the event of a war. Aircrews from different NATO partners—Norway and the United States in this case—may find themselves fighting alongside each other during a contingency operation as they did in 2011 during Operation Odyssey Dawn. Indeed, interpersonal relationships between allied aviators are amongst the most valuable gains from international air exercises.

Because these air forces are not training to go to war against each other, during most exercises, aircraft will be divided between friendly Blue Air forces and adversary Red Air forces. Friendly Blue forces will fly using the tactics and procedures they would use during real combat operations—accounting for the limitations of airspace and ranges etc.—while Red Air will replicate the tactics and techniques of the enemy. Thus, during an exercise such as this in Norway, it could have been a situation where the F-22s might have emulated enemy aircraft such as a Russian Su-35s while the F-35s would have flown as Blue Air or vice versa. The idea is to learn and familiarize each other with their tactics and procedures—within security limitations of course.

Security limitations are a serious issue for the F-22 community. Raptor pilots are often not allowed to utilize the full capabilities of their jets during international exercises. “F-22 units are often directed to participate in exercises as part of Air Force efforts to build relationships with partners,” notes a recent report from the Government Accountability Office. “However, due to security concerns regarding exposing the F-22’s unique capabilities, F-22 pilots may be restricted from flying the aircraft the way they would in combat, according to Air Force officials. As a result, the value of the training is reduced and these types of exercises can result in the F-22 pilots developing bad habits that must be corrected in future training, according to Air Force officials.”

The only time during air exercises where the gloves come off (to an extent), so to speak, is during basic fighter maneuvers (BFM) training—or the typical within visual range dogfights that are often depicted in movies and other media. While aircraft and weapons capabilities are important, during BFM engagements—and depending on the precise setup (defensive, high-aspect, offensive perch), victory often comes down to individual pilot skills and luck. A more maneuverable aircraft with more thrust and with better missiles might often win those engagements, but even the most capable fighter in the hands of a highly capable pilot can lose if they are having a bad day. The bottom line, however, is not about thumping ones’ chest, it is about learning and doing better next time.