"Without these three gentleman here today, the French flag — that was flying in St. Louis in the early 19th century — would not be flying here today" 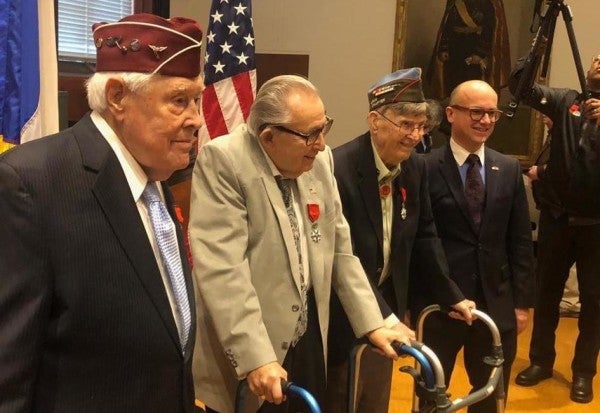 ST. LOUIS — As a French diplomat pinned his country's most distinguished medal to Alfred C. Villagran's chest, the World War II veteran thought of the five men in his B-17 bomber crew who were killed in combat.

“I think they would be very proud of me,” said Villagran, who was 19 when he served in the Army Air Forces as a B-17 radio operator and gunner. “But I like to think that I accepted this not only for myself but for all the guys that fought for France and Western Europe. There are a lot of deserving guys who didn't make it back.”

At 95, Villagran, of Chesterfield, was the youngest of three men and World War II veterans France awarded the Legion of Honor on Wednesday at Soldiers Memorial.

The French also gave Eugene J. Harmack, of Kirkwood, and Glenn A. Harrison, of O'Fallon, Mo., the honor, which was started in 1802 by Napoleon Bonaparte. Both men are 98.

France has been giving the award to veterans in America's “Greatest Generation” for their aid in liberating the country from Nazi occupation. Past recipients include President Dwight D. Eisenhower, Gen. Douglas MacArthur and hometown aviator Charles Lindbergh.

“Without these three gentleman here today, the French flag — that was flying in St. Louis in the early 19th century — would not be flying here today,” Guillaume Lacroix, consul general of France for the Midwest, told an audience of more than 200 people, including dozens of the veterans' family and friends.

Lacroix's grandparents lived under Nazi occupation, he said. His father was 8 when U.S. soldiers liberated the country.

“France was no longer a country under the Nazi occupation. .. You changed that, forever. And we are forever indebted to you,” Lacroix said.

He was 24 when he fought in the Battle of the Bulge in the Ardennes forest in Belgum. The battle, fought in below-zero cold, was the largest single one on the Western front; nearly 20,000 American soldiers were killed.

Harrison was 23 when he was a pilot on a B-17 plane that flew 17 missions and was shot down twice. The first time his plane was shot down, his crew survived by bailing into the English Channel.

“I'm very honored,” Harrison, who will turn 99 in March, said after the ceremony.

“We all depended on each other,” Villagran said. “And we remained calm and cool when we got in trouble. We did what we had to do.”

He was once on a plane that lost two of its four engines when it came under fire. The plane was attacked again by German fighters as it flew back to England, destroying a third engine. Villagran's crew made it back to safety only thanks to allied fighters' shooting down one of the German planes.

Five of his crew were killed on another mission. The surviving members stayed in touch after the war.

Villagran, the last surviving crew member, is among other veterans of the 8th Air Force featured in a documentary, “The Cold Blue,” airing on HBO in June.

“I can't believe it happened,” Harmack, who turns 99 on Feb. 2, said after the ceremony. “It's a beautiful medal and it's a great honor. I'm very proud.”

He was joined at the ceremony by his family and friends, including his brother-in-arms Eugene Ganz, 95, of Manchester, who also fought in the Battle of the Bulge and was wounded there. The two met after the war and have taken part in a monthly meeting of local veterans of the battle for years.

“It takes your mind back to fighting in the battle, where every step you took meant possible injury or death,” Ganz said. “I'm very happy for him.”

Lionel Cuillé, a French native and professor of French at Webster University, was one of dozens of people who shook each veteran's hand to congratulate and thank them.

Cuillé comes from a military family. French people, especially in the north of the country, are very aware of the sacrifices American forces made to help liberate the country, he said.

“I wish my grandfather would've been here to witness this,” he said. “It was extremely moving.”

By the end of the ceremony, Villagran said, he was overwhelmed.

“This has been fabulous,” he said. “I wasn't ready for anything like this.”