The moment, as he recounted in a video posted to the Marine Corps Facebook page Tuesday, was almost like the Christmas truce that wasn't. 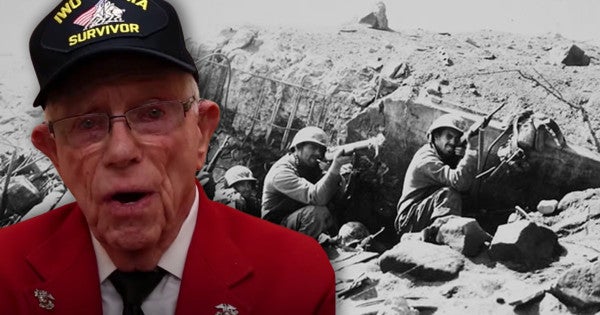 The Battle of Iwo Jima, which began Feb. 19, 1945, was one of the bloodiest battles in Marine Corps history, as former Cpl. Don Graves knows firsthand and will never forget.

He’ll also never forget the time a Japanese soldier smelled hot chocolate being brewed near him and called out for him to bring him some. The moment, as he recounted in a video posted to the Marine Corps Facebook page Tuesday, was almost like the Christmas truce that wasn’t.

Sitting in a fox hole with two other Marines on the fifth week of the battle, he said, Graves decided to make himself some hot chocolate. “So my other two buddies, they said, ‘make enough for three of us.'”

So there he was, slicing up his chocolate ration with a Ka-Bar and chopping it into a powder. Then he cut off a piece of his Composition C2 demolition charge and used it to light a flame.

“Just a nice little fire going, and we sat there and we watched it,” he said. “And then all of sudden I could smell hot chocolate.”

Of course, so could everyone else, including enemy soldiers.

A few minutes later, he heard a Japanese voice calling out to him, “hey Marine, very good chocoletto. You bring chocoletto here.”

“If you want chocoletto, you come here and get it,” he said back. “He says, ‘oh no, you bring here,'” Graves said, laughing.

“There’s humor in combat. Every man that’s been in combat knows that sometimes funny things happen.”

Watch him recount the story below:

Today is the 74th anniversary of the start of the Battle of Iwo Jima.

Cpl. Don Graves reminds us that there can be a lighter side to even the harshest battles. pic.twitter.com/Hr9DWN5QE6