The Army is trying to make ‘warrior restaurant’ happen, and it’s not gonna happen 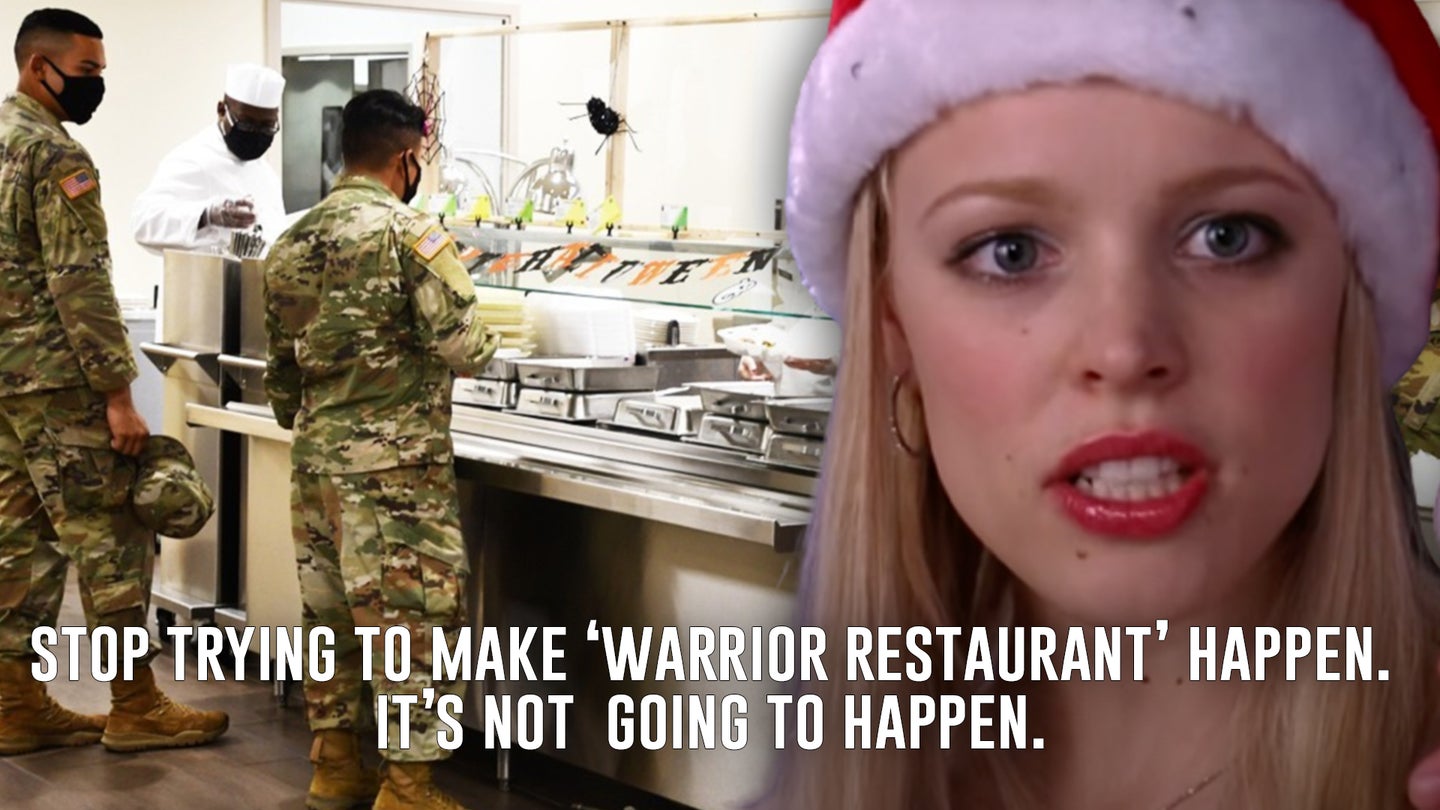 In the classic 2004 comedy Mean Girls, the character of Regina George orders a friend to stop using a nonsensical word in conversation. “Gretchen, stop trying to make ‘fetch’ happen,” she said. “It’s not going to happen.”

And Regina’s wise counsel may be needed now more than ever for the United States Army, because just like Gretchen’s ill-fated coinage of “fetch,” the service’s effort to rename its mess halls as “warrior restaurants” is probably not going to happen.

Confused? So were a bunch of current and former soldiers — and everyone else for that matter — once they learned that the Army was trying to change the “preferred nomenclature” for dining facilities, or DFACs, to “warrior restaurants.”

As Stars & Stripes’ Chad Garland reported, Sgt. Maj. of the Army Michael Grinston plugged the Army’s “transition to the warrior restaurant” in October, and since then the public affairs apparatus has sprung into action to hype facilities where soldiers usually go through a buffet line of mass-produced food options as so-called restaurants for warriors.

“Whether it’s breakfast, lunch or dinner, when hunger strikes, Fort Polk’s Patriot Warrior Restaurant, bldg 1162, Glory Loop, and Geronimo Warrior Restaurant, bldg 2382, Alabama Avenue, should be the first lines of defense against an empty stomach,” proclaimed an article posted on the Army’s website in November, urging soldiers to “visit warrior restaurants to experience culinary art at its best.”

The name change is part of an Army initiative launched in January 2019 to improve soldiers’ nutrition levels that emphasizes healthy food options. It’s also about saving the service some serious dough considering the Army wastes millions each year producing food that soldiers don’t show up to actually eat.

“We’ve seen the lack of participation at large volumes in the chow halls,” former Army Secretary Ryan McCarthy said last year. “There have been a lot of investments that have been made in the chow halls to also change the menus.”

Notably, the name change is one of the “significant steps” in the Army’s campaign to get soldiers to actually eat the food served in warrior restaurants, where the ultimate goal is to have stations with various food choices to choose from similar to college dining halls.

The military has plenty of names for where service members sit down to eat: Marines usually call them chow halls or mess halls, as do many soldiers. Sailors call it the galley or mess deck. But DFAC (pronounced Dee-Fac) became the preferred shorthand term for most serving at forward operating bases in Iraq and Afghanistan, where lucrative contracts for civilian-run dining facilities allowed “fobbits [to] dine on surf and turf” in “air-conditioned splendor,” as NPR put it.

But the online reaction, from service members and veterans alike to the “warrior restaurant” news was largely negative, not unlike the 1985 “New Coke” debacle in which Coca-Cola debuted a new, better-tasting flavor of the tried-and-true classic that turned out to be universally despised. Many took issue with the Army’s decision to add yet another “warrior” brand to the service, which has a “best warrior” competition, “warrior transition units,” and the “warrior ethos” even embedded in its lexicon alongside its warrior-focused 2003 overhaul of the soldier’s creed.

“I’ve never heard it called anything but DFAC,” said Rick Dickson, a spokesman for the 3rd Special Forces Group.

Still, the Army isn’t alone in trying to serve a chow hall with a side of cringe. The Air Force in 2019 famously touted its healthy food initiative for dining facilities as a way of providing “healthy fueling” for airmen it called “human weapon system[s].”

Yet the Army has a long way to go if they want to make “warrior restaurant” a thing, which, like “fetch,” is not likely to ever happen. At least not as anything other than a joke that even senior Army leaders can’t help but make.

“I’m so confused by this,” said Command Sgt. Maj. Jason Towns. “I miss just calling it a DFAC. It’s still a challenge to remember to call it a Warrior Restaurant.”