"The application of HoloLens within the IVAS system is designed to help people kill," the employees said in a letter. 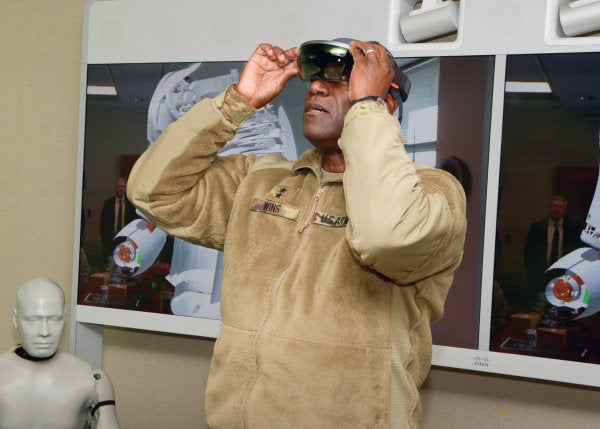 The Army has a bit of a Silicon Valley problem.

Microsoft employees — over 250 now, according to the Microsoft Workers 4 Good Twitter account — are furious about their company's $479 million contract with the U.S. Army for augmented reality headsets.

In a letter to CEO Satya Nadella and President Brad Smith, employees wrote that they “do not want to become war profiteers” and that Microsoft is enabling the Army's “ability to cause harm and violence.”

Meanwhile, Nadella told CNN on Monday that Microsoft is “not going to withhold technology from institutions that we have elected in democracies to protect the freedoms we enjoy.”

The contract was awarded in November 2018 for the Integrated Visual Augmentation System (IVAS). Army Undersecretary Ryan McCarthy said on Tuesday morning at an AUSA breakfast that IVAS is “a signature priority” in the Army's budget.

The Army said in its contract announcement last year that IVAS “will provide an unparalleled advantage on the battlefield.' McCarthy described the equipment on Tuesday as a pair of glasses that could have an interface with thermal or night vision in combat and collect data on things like their marksmanship and heart rates for use in training, which could result in an “exponential increase in their performance.”

This isn't the government's first run-in with Silicon Valley — it's not even the first with Microsoft. More than 100 employees protested Microsoft's work with Immigration and Customs Enforcement last summer; Google declined to renew a contract with the Pentagon after employee backlash over an artificial-intelligence drone system; and Amazon employees demanded that CEO Jeff Bezos stop selling facial recognition software to law enforcement.

“It's important for us to have a conversation with not only Silicon Valley but the country,” McCarthy told reporters. “That we need these capabilities, that we would hope that our best and brightest in the country would want to make systems for us….so that we have the best the world has to offer.”

But the Microsoft employees argue in their letter that they weren't properly informed of how their work would be used, and that they were working on the HoloLens before the Army contract came about. The HoloLens technology was originally described as something that architects or video gamers could use, the Washington Post reports.

“The application of HoloLens within the IVAS system is designed to help people kill,” the open letter states. “It will be deployed on the battlefield, and works by turning warfare into a simulated 'video game,' further distancing soldiers from the grim stakes of war and the reality of bloodshed.”

“It would not be appropriate for us to comment on the polices of a private corporation. We value all of our relationships with commercial tech companies,” Army spokesman Lt. Col. Isaac Taylor told Task & Purpose in a statement. “Partnering with the best tech companies in the world will help preserve the critical lead of the United States in artificial intelligence. Maintaining our overmatch against potential adversaries and deterring aggression is the safest way to preserve peace.”

The Post reports that the military could purchase “more than 100,000 of the systems in the coming years.”

SEE NEXT: The AI Column: Time For A Moral Reckoning Down In Silicon Valley