“It blows my mind that we’re in a day and age where the system even exists." 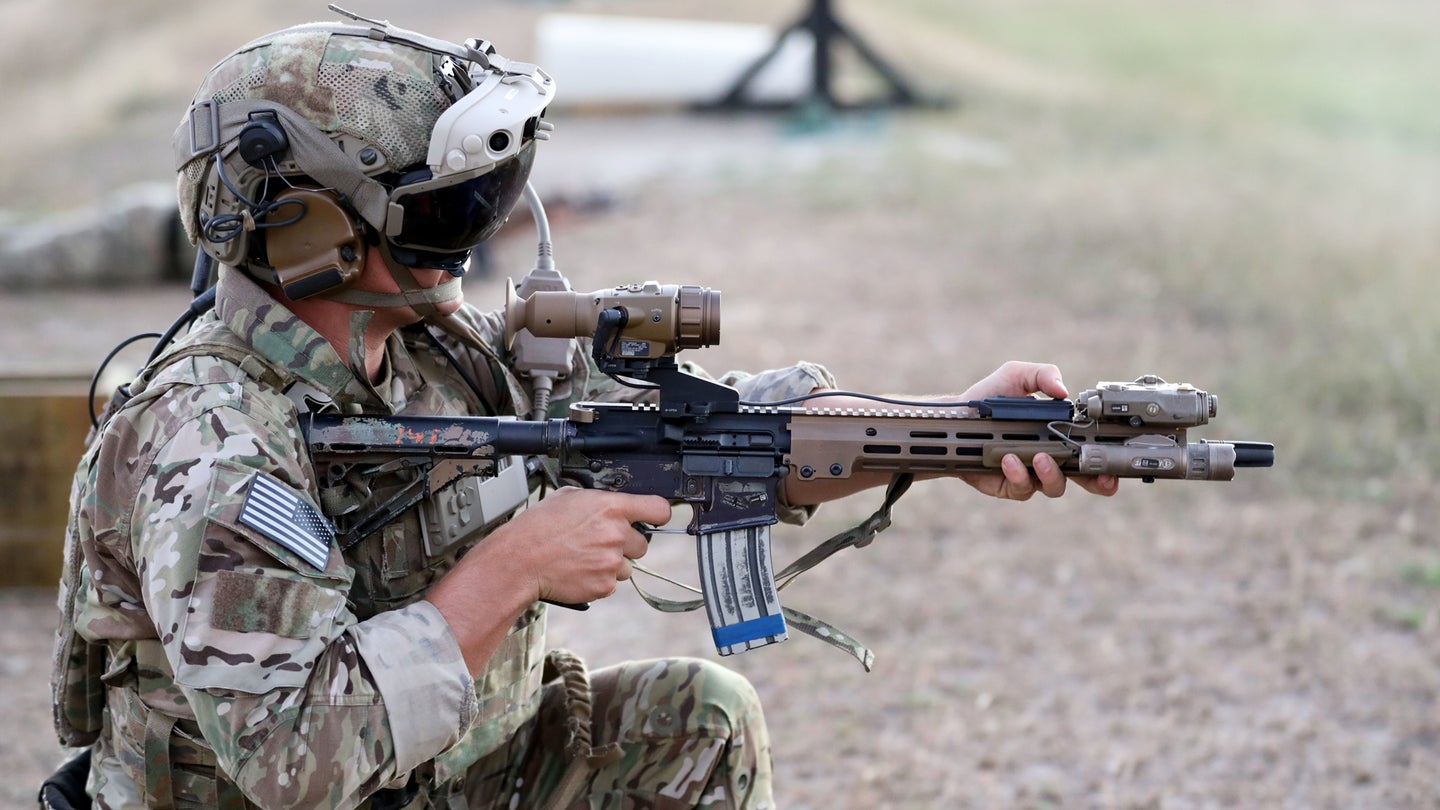 Despite a year-long delay and reports that the Army still has more work to do to perfect its newest futuristic goggles, some lucky soldiers can expect to get their hands on them this year.

The Integrated Visual Augmentation System (IVAS) is expected to undergo more testing in May, according to Courtney Bacon, a spokeswoman for Program Executive Office Soldier. Bacon said that the IVAS is “still on track” to be fielded to its first unit by the end of the fiscal year, which ends in September.

The IVAS system, based on Microsoft’s existing HoloLens 2 technology, has been tested by soldiers since 2019. It has been a top priority for service leaders as the Army worked to modernize the force; in 2019, former Army Secretary Ryan McCarthy called it a “signature priority” in the Army’s budget.

The system will provide troops with augmented reality — a technology that overlays digital information onto the screen soldiers are looking through while wearing the goggles — for training and on-the-spot language translations; high-resolution night and thermal sensors; facial recognition software; and the ability to see what a location or objective looks like before they get there. It will even give soldiers the ability to see outside of a vehicle before they exit, providing greater awareness of what they’re walking into.

“There’s always a line between the squads and the tracks, and having this equipment is going to help tie them in so the dismounts in the back can see the actual optics of the vehicle itself and then they can seamlessly work with the crew because everyone can see around the vehicle without actually having to step outside of it,” said Army Sgt. John Martin, a Bradley master gunner who tested out the goggles last February. “It has countless uses like land navigation, being able to track things while on the battlefield, moving through urban complexes, moving through open terrain, it’s insane.”

And aside from the system itself, the way it was tested was new for the Army — actually giving soldiers the ability to try out the equipment they’ll be using as it’s developed was a novel, albeit common-sense concept brought into practice by Army Future Command.

But a recent report by Bloomberg said the heads-up display was found to have “not yet demonstrated the capability to serve as a fighting goggle.” The Army and Microsoft, who are developing the goggles, need to “improve display quality and reliability,” Jessica Maxwell, a spokeswoman for the Pentagon’s Operational Test and Evaluation office, told Bloomberg. More information about what work was still to be done came on Thursday with the release of the annual Operational Test & Evaluation report, which said the Army needed to continue to “mitigate deficiencies” and complete a “battery and power management plan to determine how soldiers will charge batteries” in order to complete a 72-hour mission scenario.

The latest developments follow a years-long process which ran into issues almost immediately. Upon the announcement that Microsoft would be working with the Army to develop the goggles in 2018, over 200 Microsoft employees wrote an open letter to company leadership demanding that the contract be dropped.

“We are alarmed that Microsoft is working to provide weapons technology to the US Military, helping one country’s government ‘increase lethality’ using tools we built,” the letter said, according to The Verge. “We did not sign up to develop weapons, and we demand a say in how our work is used.”

In response to the open letter, McCarthy told CNBC that he appreciated the employees’ concerns but “these are the same men and women that are protecting their freedoms so they can develop this technology,” And last March, Microsoft was awarded a contract for almost $22 billion to begin producing the IVAS.

While the IVAS was originally supposed to be fielded to soldiers last year, PEO Soldier confirmed in October that it was being delayed to give the development team time to “enhance the IVAS technology platform” and make it the best it can be for the soldiers wearing it.

The system has also raised concerns in Congress. Last year, lawmakers demanded that a portion of the program’s funding be withheld until the Army could provide more answers about its development and delays.

But despite the back-and-forth, the IVAS can’t come soon enough for the soldiers who will use it. The system was most recently tested by a Ranger battalion who put it “through its paces,” using it for land navigation, rapid target acquisition, and mission exercises.

Sgt. 1st Class Brian Hayman, a platoon sergeant in 3rd Battalion, 75th Ranger Regiment, said in an Army release that the IVAS essentially erases human error during land navigation. It saves time by cutting out the need to look at a compass or check a map because the compass is on the inside of the goggles.

“You never have to stop to do a map check or anything like that because, with just the push of a button, you have an arrow that’s in the bottom of your screen and you walk the arrow to your point, so there’s no accidentally drifting left or right,” he said.

Staff Sgt. Jake Croxdale, a squad leader in the battalion, echoed the same. Having the ability to “access a map by hitting just one button” instead of having to stop and look at a compass, map, or phone, “allowed me not to stop as much as I normally would, and ultimately execute faster.”

Another key component the Rangers pointed out was the ability to see where everyone on your team is on the digital map in the goggles. 1st Lt. Luke Huen said being able to see “where everyone’s located on the battlefield at any given point in time” is “by far the best feature.”

Ultimately, Hayman admitted that the “thought process” behind the IVAS is “incredible.”

“It blows my mind that we’re in a day and age where the system even exists,” he said.