The Army May Finally Get To Roll Up Sleeves

If you’ve served in the Army since 2005, the year the Battle Dress Uniform was replaced with the Army Combat... 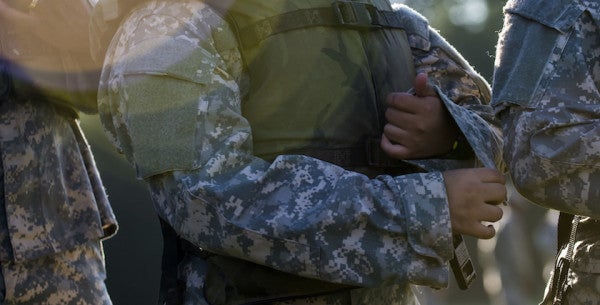 If you’ve served in the Army since 2005, the year the Battle Dress Uniform was replaced with the Army Combat Uniform, or ACU, you’ve probably, on more than one occasion, turned an envious eye toward your Marine Corps brethren and thought, “Why the hell do they get to roll up their sleeves and we don’t?”

It’s a legitimate question. For well over a decade, the Army has been engaged in two wars in two countries that are not known for their mild weather. To have served in Iraq or Afghanistan — especially southern Afghanistan — during the summer is to know what the inside of an oven feels like. In both conflicts, becoming a heat casualty was a real risk every soldier faced when they left the wire.

The Army’s official explanation for not allowing soldiers to roll up their sleeves — that it protects forearms from the sun and insects — has been widely perceived as a weak justification for a seemingly arbitrary rule. Sunscreen and bug repellent are usually supplied in abundance wherever soldiers are deployed. And sunstroke is a far worse fate than sunburn.

Related: It’s time for us to stop making up uniform regulations >>

Now, the Army appears to be finally coming to its senses. On June 16, Army Chief of Staff Gen. Mark Milley announced that soldiers stationed at Fort Hood in Texas will begin a 10-day pilot program to test whether or not sleeve-rolling will be a permanent option Army-wide.

“Feedback from soldiers resulted in us wanting to do a trial over the next 10 days to see the feasibility of updating [Army Regulation] 670-1 and incorporating these changes in the future to give commanders flexibility in wear based upon their unit’s mission,” Lt. Col. Jerry Pionk, an Army spokesman, told Army Times.

Changes to regulation that make life a little more tolerable for soldiers, such as this one, are often met with complaints that the Army is going “soft.” But before you start shaking your head in disappointment, remember: When soldiers wore BDUs, they were allowed to roll up their sleeves, although the rule was that they had to ensure the camouflage pattern faced out. That won’t be the case with the ACUs, or at least for now.

“For now, sleeves will be rolled with the inside facing out, similar to the Marines,” Pionk told Army Times. “Future updates to AR 670-1, if any, will further specify the exact manner of how the sleeves can be rolled.”