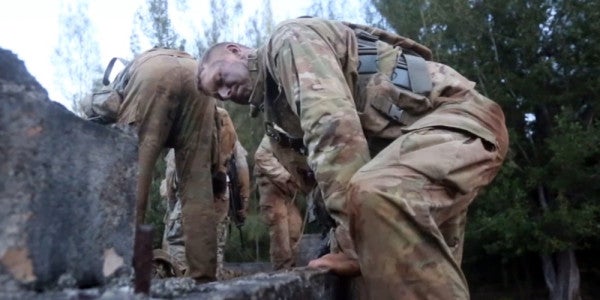 In keeping with a big year in Official Army Fashion (No more gross gray PT uniforms! Brand new jungle boots! The return of pink and greens!), the Army is working overtime to field its new Improved Hot Weather Army Combat Uniform, the lightweight ACU alternative that features a breathable, quick-drying tunic perfect for the oppressive humidity.

The Army’s current battle uniform is by far more durable than your average weekend civvies; there’s a reason vintage Army wear has been subjected to five decades of cultural appropriation by fashion-forward civilians, for better or worse. But the regular Army Combat Uniform top isn’t without problems when you’re rucking it through humid combat zones like, say, the jungles of Africa — areas the Army’s likely to see deepening involvement in the coming years.

“When it gets wet, it tends to stay wet,” the branch admitted about the uniform in an Oct. 24 release. “And when it's hot out, it tends to keep Soldiers hot.”

You’ve got to give something to get something, though. The Hot Weather ACU sacrifices a few pockets (your pen pockets are safe, thank God) and layers of extra fabric to give you that perfect feel for intemperately warm, wet climes.

While the Army initially announced plans last August to begin evaluating the new uniform in January 2018, the pipeline just got a lot shorter. The branch announced on Oct. 24 that it planned on fielding the lightweight option “within a year,” starting with the 25th Infantry Division in Hawaii — the same division that’s been testing 30,000 pairs of those brand spanking new jungle boots since March of this year.

“We've tested the heck out of these,” PEO Soldier’s Brig. Gen. Brian P. Cummings said in the Army release, noting that because the new uniform “is based on an existing uniform that has already been extensively tested, getting this light-weight uniform to the field will take less time.”

More importantly, the new-and-improved jungle uniform won’t just be for divisions tasked with hunting down ISIS in Central Africa or playing beach volleyball during leave in Hawaii: According to the Cummings, the Army wants to make the new uniform available for purchase by all troops through military retail outlets.

Finally, you’ll never have to shell out for summer linens again!