This storied Army unit owes its name to the late Sen. Bob Dole 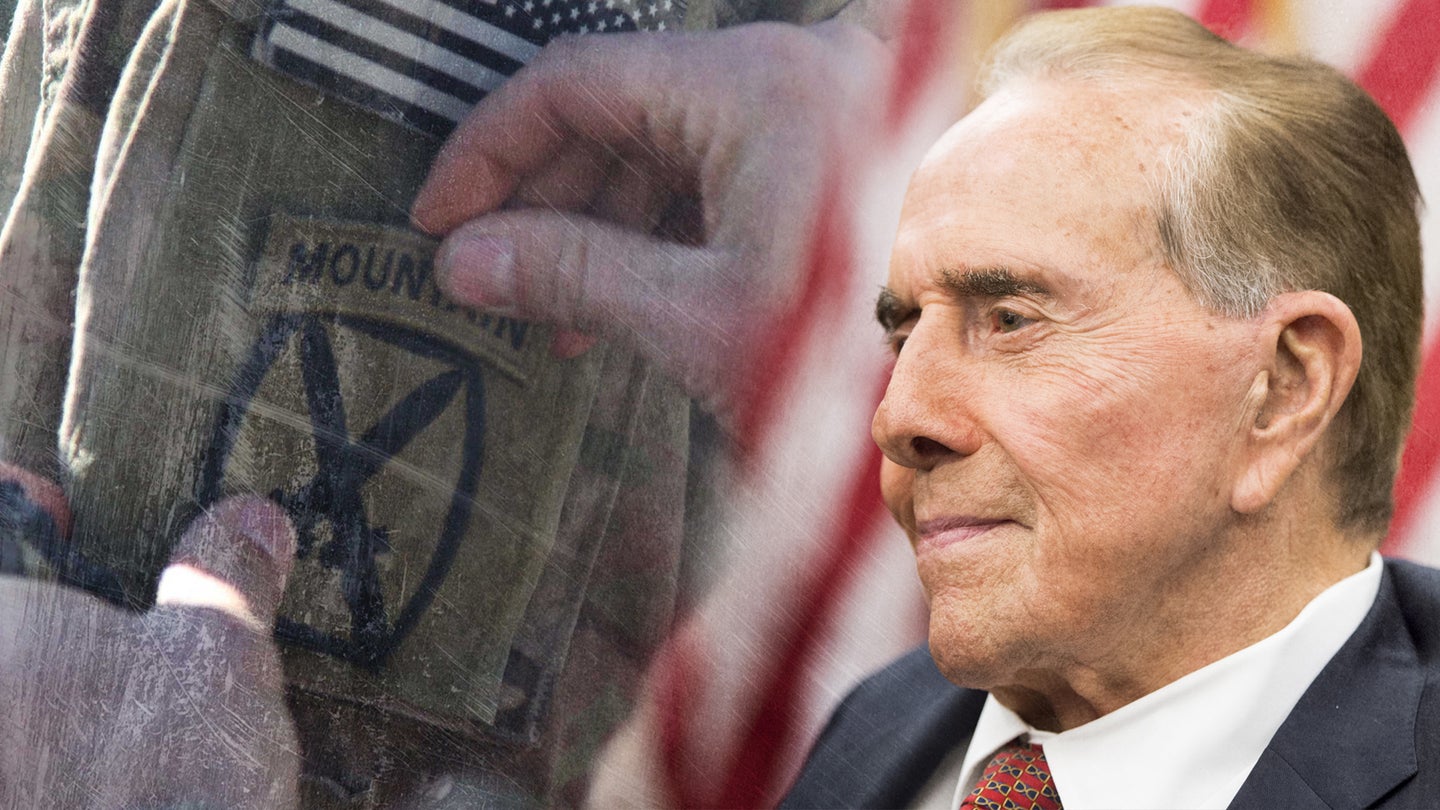 Among the late Sen. Bob Dole’s many accomplishments was ensuring that the legendary unit that he fought with during World War II reclaimed its heritage when it was reactivated 40 years later.

Dole, who died on Dec. 5, is one of 10th Mountain Division’s most famous veterans. While serving with the division in April 1945, Dole was seriously wounded near Castel d’Aiano in Italy. He was hit in his right arm and upper back and nearly died during his 39-month recovery.

He was ultimately awarded two Purple Hearts and a Bronze Star with “V” device for valor and went on to represent Kansas in the Senate from 1969 until 1996, when he resigned amid his presidential campaign.

In 1985, Dole was highly influential in persuading the Army to allow the 10th Mountain Division to retain its name and to permit soldiers to wear the mountain tab to honor the division’s legacy.

From January to May 1945, the 10th Mountain Division fought in the meat grinder of northern Italy, ultimately breaking through the German’s mountain defenses and destroying five enemy divisions.

“I thought it was mighty odd that a kid from Kansas who had seen a mountain up close only once in his life would be assigned to lead a platoon of mountain troops,” Dole described in his memoir “One Soldier’s Story.”

Nonetheless, Dole quickly earned his place among the soldiers of I Company, 10th Mountain Division.The company was composed of a mix of olympic skiers and mountain climbers who were handpicked for their ability to deal with the mountainous terrain in the European theater. A few weeks after assuming command of his platoon, Dole was wounded by a frag grenade while on a ski patrol. In his memoir, he remarked that while the injury “hurt like crazy” the medics “patched me up good as new.” It would not be the last time that Dole was wounded in action.

“I felt a sting, as something hot, something terribly powerful crashed into my upper back behind my right shoulder,” Dole later wrote in his memoir.

Paralyzed from the neck down, Dole ordered his soldiers to continue the attack. It took several hours to move him to a military hospital because two medics who were sent to retrieve him and another wounded soldier were killed enroute.

Dole spent the rest of the war and a good deal of time afterward going through a perilous recovery.  After nearly dying from infections several times, he left his last military hospital in May 1948.

The division was initially inactivated on Nov. 30, 1945, but the Army reactivated it as a training division in July 1948 and then it was sent to West Germany as a combat infantry division in 1954 before it was inactivated again on June 14, 1958, according to the Army.

When the Army looked to reactivate the division once more in the 1980s, the service initially planned to rename the unit the “10th Division,” ignoring the storied unit’s World War II history, when soldiers with the unit climbed vertical cliffs between 1,700 and 2,200 feet high and then fought the Germans.

That did not sit well with the division’s World War II veterans, who asked Dole to intervene. At the time, Dole had just become Senate majority leader. In January 1985, Dole wrote to then-Army Secretary John Marsh to say he was “somewhat troubled” to learn that the unit would be reactivated as simply the “10th Division.”

“Is there any reason that it cannot be known as the ‘10th Mountain Division’ rather than the ‘10th Division’ when it is reactivated?” Dole wrote to Marsh. “I would appreciate your comments.”

The effect of Dole’s letter was immediate.

“Seven days later [NOTHING moves that fast at the top of the Army], Marsh ordered the redesignation of the reactivated unit from the 10th Division to the 10th Mountain Division and authorized the unit to carry forward its Mountain tab,” the XVIII Airborne Corps tweeted earlier this year.

On Feb. 13, 1985, Dole spoke at the 10th Mountain Division’s reactivation ceremony at Fort Drum, New York, where he noted that one German general once described the division as the best division he had fought against on any front.

“As a second lieutenant and leader of the 2nd platoon of ‘I’ Company, my goal was to reach Hill 913,” Dole said, recalling the battle where he was wounded. “Today, as a senator, my goal is to make sure that the peace we fought so valiantly for is maintained — that peace is preserved. It required much of us, in manpower, in money, and above all, in spiritual and national resolve. Those of us that took part in the fighting bless the subsequent peace. We hail the friendships that grew out of the hostility and we pledged ourselves anew to the cause for which so many gave so much.”