This Army Ranger Legend Will Live Forever In His Hometown

This past weekend marked the 71st anniversary of the death of Col. William O. Darby, the original commander of the... 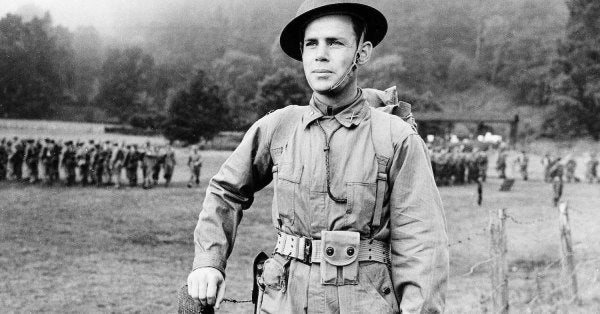 This past weekend marked the 71st anniversary of the death of Col. William O. Darby, the original commander of the U.S. Army Rangers.

On Saturday, April 30, Darby’s life was commemorated in Fort Smith, Arkansas, the town where he was born.

The beloved hometown hero was honored with an unveiling of a memorial bronze statue of Darby on a 1942 Harley-Davidson motorcycle. The sculpture was based on a photograph taken by fellow Ranger Phil Stern just after the invasion of North Africa on Nov. 8, 1942. The photograph was later published on the January 1943 cover of Newsweek magazine.

Accompanied by a police escort and a motorcycle brigade of rangers, the Darby statue entered town with grand fanfare. In the crowd was veteran Kenneth Vaught who was overcome with emotion as he recalled escorting Darby’s casket to Fort Smith cemetery 65 years ago from Cisterna.

“[He was] my idol,” Vaught told Channel 5 KFSM-TV in Fort Smith. “I was in the military too, but nothing equal to him.”

Watch video of Darby statue being escorted in Fort Smith.

The statue was erected in Cisterna Park on the eastern edge of town. Darby’s arm points in the direction of the European theater. A statue of the first African American U.S. deputy marshal, Bass Reeves, atop a horse defends the western side of town.

Several hundred people were in attendance, including several dozen Rangers, Darby’s nephews Darby and Presson Watkins and niece Sylvia, and one of the few remaining original Darby’s Rangers, 95-year-old Staff Sgt. Wilbur “Punch” Gallop. Students from Darby Junior High recited the Ranger creed, which is part of their school handbook.

“He tells them Darby’s Rangers don’t follow anyone, they lead the way,” organizer Liz Armstrong told Task & Purpose of Principal Darren McKinney. “He leads that school with integrity. He reminds the students that greatness has walked those halls and they can lead the way too.”

Initiated three years ago, The Darby Legacy Project was spearheaded by Armstrong and her husband Joe, a retired U.S. Army Ranger.

The 15-foot tall, 1,300-pound bronze monument was created by sculptor Kevin Kress of Little Rock, Arkansas. Funds for the $165,000 monument were covered by various fundraising efforts including a generous donation from the Steel Horse Rally, a charity motorcycle rally honoring all those who serve. Etched on a plaque beneath the new statue is a quote from Darby: “Onward we stagger and if the tanks come, may God help the tanks.”

Darby was born in Fort Smith on Feb. 8, 1911. A 1933 graduate of West Point, he was commissioned as a second lieutenant and assigned to the 1st Battalion, 82nd Field Artillery of the 1st Cavalry, at Fort Bliss, Texas. After the bombing of Pearl Harbor, Darby deployed to Northern Ireland in January 1942 where he was tasked with organizing and training a new elite unit based on the British commandos. Some of the same rigorous training continues to exist in the Darby Phase of Ranger school at Fort Benning.

Assigned to Italy as assistant division commander of the 10th Mountain division, Darby was one of two officers killed by a burst of German 88mm shells. He was just 34 years old.

“He never forgot his roots in Fort Smith,” said McKinney. “This statue allows us to honor our native son.”