When A Car Overturned On The Road, These Veterans Intervened

On May 20 two military veterans, Chad Collard and Lavell Zachary, rushed to help the victims of a car crash,... 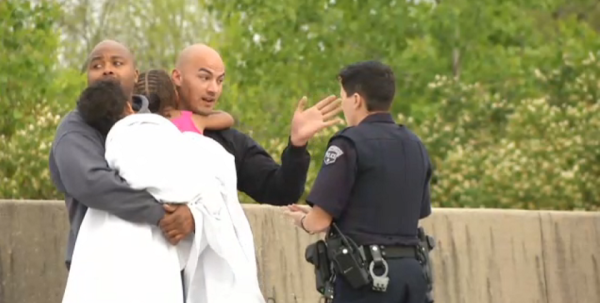 On May 20 two military veterans, Chad Collard and Lavell Zachary, rushed to help the victims of a car crash, including two adults and three young children, ages 3, 4, and 8 in Trotwood, Ohio.

According to WDTN, an NBC news affiliate, Collard and Zachary were both strangers before that moment, but when they saw an overturned SUV on the road, the two men responded the same way — they ran to help.

“I was scared of a fire happening or whatever and wanted to make sure everyone was okay,” said Collard, who saw the vehicle while driving the opposite direction and hopped across the overpass to help.

According to Zachary, his intervention wasn’t a matter of choice, but of instinct.

“You heard screams of kids. How could you ride by that?” Zachary said in a Fox News interview.

The two men pulled the children out of the back of the vehicle, where police said they were not properly secured. The two youngest children clung to their rescuers.

“The little boy, he never knew me and he was gripping me as tight as he could,” Zachary told WDTN.

The two men helped the kids from the vehicle and comforted them while they waited for the paramedics to arrive.

“The little girl walked to me and I pulled her out the back and latched on to me the whole time,” Collard said.

Witnesses of the crash told police that the female driver and male passenger were seen hitting each other before the incident.

According to Fox News, the police said they think the alleged dispute may have played a role in the crash.

The children were taken to Dayton Children’s Hospital in Ohio and are all in good condition. Both the man and woman injured in the crash are reported to have non-life threatening injuries.