Since the race-fueled massacre at Charleston’s Emanuel African Methodist Episcopal Church that left nine dead in South Carolina in June... 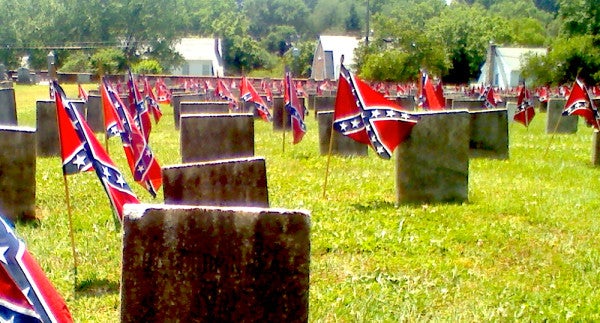 Since the race-fueled massacre at Charleston’s Emanuel African Methodist Episcopal Church that left nine dead in South Carolina in June 2015, the presence of the Confederate flag in public places has garnered new attention in the national consciousness .

Shortly after the shooting, South Carolina Republican Gov. Nikki Haley supported the legislature's decision to have the flag removed from the state’s capitol.

And on May 19, 84 Republicans sided with nearly all House Democrats in a 260 to 164 vote to remove the flag from Veterans Affairs cemeteries.

The vote was on an amendment to the 2017 Military Construction and Veterans Affairs appropriations bill proposed by Rep. Jared Huffman, a Democrat from California.

The amendment, which is part of the overall spending bill for the Department of Veterans Affairs, will allow Confederate flags on individual gravestones, but ban them from flagpoles. It also prohibits the use of federal funds to provide and display them on cemetery grounds.

Despite the bipartisanship shown in favor of the amendment, all six of the Republican representatives from South Carolina voted against it.

A remnant of the Civil War South, many below the Mason-Dixon see the Confederate flag as a part of their heritage. Others, however, see it as a symbol of hate. Moreover, prolonged debate over the flag has brought to light issues surrounding race, government intervention, and the First Amendment’s right to free speech.